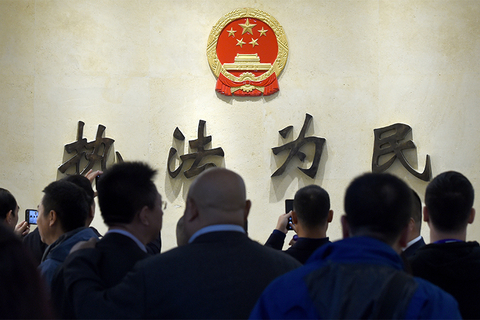 Right after Jiang Wei was made professor at Renmin University of China, the 37-year-old legal scholar was appointed a deputy procurator-general, taking on the senior official role on a temporary basis.

It was 1994, and Beijing’s Haidian district procuratorate had just become the first in the country to test a program that invited legal scholars to serve the justice system. The university’s law school offered to assign senior scholars to the post of deputy head of the procuratorate on a revolving basis.

Chinese and American foreign policy experts singled out the Taiwan Strait issue as the most likely to trigger outright conflict between China and the United States as they called for the world's two biggest economies to resolve their differences at the 10th World Peace Forum Monday in Beijing.

Peking University international studies professor Wang Jisi called the Taiwan issue the “core and most sensitive” issue between the U.S. and China. “If there were to be a war between the two sides, the greatest threat would be about the Taiwan Strait area,” Wang said during a panel session.

As China’s biggest Covid-19 outbreak in two years wanes, flu cases have spiked across southern China, with experts warning that the disease may sweep the country as Covid controls weaken natural immunity.

In the period from May 23 to June 19, the country recorded 347 local flu outbreaks of 10 or more cases in a week, up from 98 in the same period a year ago, the Chinese National Influenza Center said.

China’s services activity gets back to growth, Caixin PMI shows

Services activity in China bounced back into expansionary territory in June for the first time since February as Covid-19 containment measures were loosened, a Caixin-sponsored survey showed Tuesday.

The Caixin China General Services Business Activity Index, which gives an independent snapshot of operating conditions in the sector, jumped to 54.5 in June from 41.4 the previous month to reach the highest in 11 months, the survey report showed. Readings higher than 50 signal expansion.

The Caixin China General Composite PMI, which covers both the manufacturing and services sectors, was 55.3 in June, a big jump from 42.2 the previous month.

The Chinese side expressed its concern about issues including the lifting of additional tariffs on China and sanctions by the U.S. side, as well as fair treatment of Chinese enterprises.

China’s central bank and the Hong Kong Monetary Authority (HKMA) said they expanded their currency swap facility and made the arrangement permanent, marking another step in cementing the city’s role as an offshore yuan hub.

The People’s Bank of China (PBOC) signed an agreement with the HKMA, the city’s de facto central bank, to expand the facility to 800 billion yuan ($119.3 billion), or HK$940 billion, from 500 billion yuan, or HK$590 billion, according to statements released by both institutions Monday.

Chinese photo touch-up app maker Meitu warned that it may record red ink of as much as 350 million yuan ($52.3 million) for the first half as a result of massive losses on investments in the cryptocurrencies bitcoin and ether.

The Xiamen, Fujian-based company expects total impairments of $46.5 million from bitcoin and ether holdings, the company disclosed. Meitu bought $22.1 million of ether and $17.9 million of bitcoin March 5, 2021, in the hope of reducing its risk from holding cash. The holdings grew to $100 million in the following months.

Ex-Everbright Bank executive expelled from party for ‘colluding with capital’

Young people from across China have flocked to the Pearl River Delta, the country’s manufacturing heartland, for the peak hiring season only to find low wages and fewer job opportunities.

Companies are at best offering an hourly wage of 9 yuan ($1.30) to 10 yuan, said Chen Nuo, a job seeker and vocational school graduate who recently traveled more than 600 kilometers (370 miles) from Jiangsu province to Dongguan, Guangdong province, in search of work.

China’s local governments sold about half as much land in the first half of this year as they did in the same period of 2021 as domestic developers continue to struggle with cash flow problems in the wake of Covid-19 lockdowns that cut into demand for housing, industry data show.

The plunging sales of land-use rights, which are the largest source of nontax revenue for local governments, pose a growing threat to their budgets, which have come under substantial pressure this year as officials have ramped up spending to keep Covid in check.

A major Chinese producer of the raw materials used to make solar panels said it expects profit to more than quadruple year-on-year in the first half as a government drive to boost renewables’ share of the country’s energy mix drove prices skyward.

Shanghai-traded Tongwei Co. Ltd. estimated net profit of 12 billion yuan ($1.79 billion) to 12.5 billion yuan, surging as much as 321.48%, according to a Monday exchange filing. It cited bumper demand and expanded output.