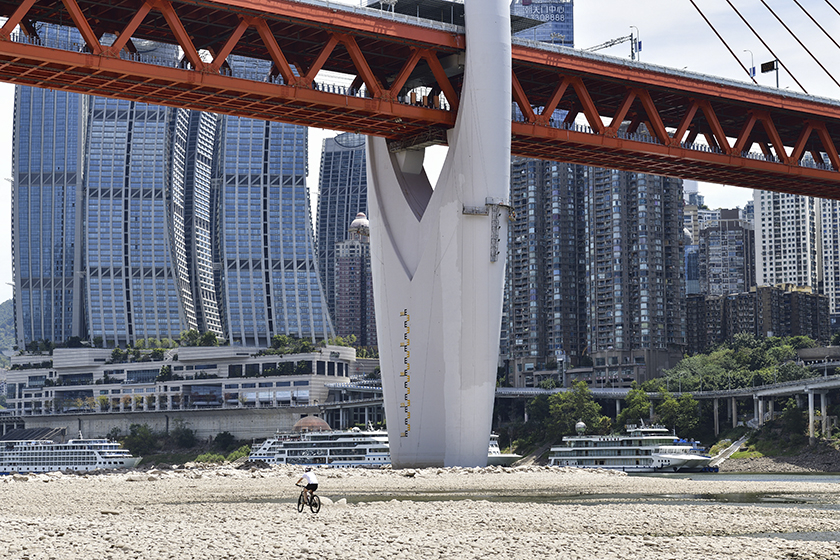 A resident rides a bicycle on the dried riverbed of Jialing River in Chongqing on Sunday. Photo: VCG

The record heat wave in Sichuan is drying up reservoirs and crippling hydropower stations — the largest source of renewable energy — causing a power crunch and forcing electricity cuts to businesses and households across the southwestern province of 84 million people.

While Sichuan accounts for less than 5% of China’s economy, the situation has stoked concerns among analysts that the crisis would temporarily drag on industrial production and GDP. Economists are already downgrading the nation’s growth outlook for this year to less than 4%, well below the government’s 5.5% target.

Social media users have slammed the police for punishing four men in East China for allegedly violating disease control measures to attend a relative’s funeral, saying that the handling of the incident was “unreasonable and callous.”

As of Thursday afternoon, a related hashtag #Local authorities respond to an incident in which four men were punished for violating control measures to attend a funeral #官方回应违反防疫规定参加葬礼被罚 has been viewed over 70 million times, receiving over 25,000 comments on China’s Twitter-like platform Weibo.

China’s State Council is stepping up efforts to stabilize the economy with a raft of measures designed to improve market liquidity and encourage spending. Policymakers are fighting to support a recovery that’s been battered by a prolonged property crisis and repeated Covid outbreaks.

The cabinet issued 19 policies to bolster the economy, state broadcaster CCTV reported Wednesday after a meeting chaired by Premier Li Keqiang. The measures are expected to create synergies with policies already introduced and help stabilize the economy, the State Council said in a readout of the meeting.

The new measures, which are supported by Beijing and local governments on the mainland, include providing special border channels for students and putting on additional flights. They were announced after more than 1,000 frustrated students — who had failed to book quarantine hotel rooms and plane or bus tickets — asked lawmakers for help, the South China Morning Post reported.

China’s aviation industry regulator is collecting feedback on a draft plan for the future use of unmanned aerial vehicles (UAVs), in a sign that policymakers are betting on the broad commercial and civilian uptake of self-flying drones and cars.

The outline — which was published Monday by the Civil Aviation Administration of China (CAAC) — provides a peek at how the government expects UAVs to be used in the following decade through the fleshing out of phased goals and targets.

By 2025, light-weight, low-speed UAVs will be widely used in inner-city short-haul logistics and UAV-enabled short-distance passenger transportation will begin to be tested, the outline predicts.