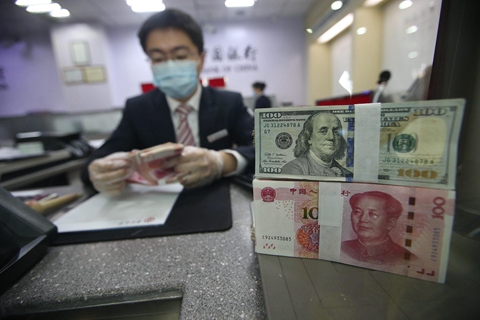 In Depth: Why Chinese companies hesitate to hedge forex risk

Imagine you are running a Chinese electronics-maker that signed a deal with an American manufacturer Jan. 4 to buy $10 million of microchips for your company’s line of internet-connected gizmos, with payment due on delivery in U.S. dollars.

Let’s say those chips arrived Aug. 1. When the deal was done, the purchase was set to cost your company 63.7 million yuan. However, due to the yuan’s depreciation against the dollar this year, the cost of that $10 million payment increased to 67.5 million yuan. That’s a 3.8 million yuan ($563,000) loss for doing nothing but running your business as usual.

This is the power that exchange rate swings can have on a business.

Dian Diagnostics Group Co. Ltd., a clinical laboratory and major testing service provider, reported accounts receivable of 10.7 billion yuan ($1.5 billion) at the end of June, a 69.9% increase from six months ago and roughly equal to its total revenue for the period, according to a Saturday filing.

Top officials fan out across China to fend off a slowdown

China’s cabinet sent teams headed by minister-level officials to 10 provinces to supervise implementation of measures to bolster the economy as the government pushes a flurry of pro-growth policies to fend off a slowdown.

Yi Gang, governor of the People’s Bank of China, led a team of inspectors to Henan province, where a multibillion-dollar village banking scandal led to the arrest of 234 people and anti-graft investigations of local banking officials.

China’s stringent Covid controls including lockdowns and travel restrictions have become a top challenge for foreign companies operating in China, according to an annual survey by an American business group.

The survey of members of the U.S.-China Business Council found that 96% of companies said they were negatively affected by China’s Covid controls, and more than half said they paused, delayed or canceled investment plans as a result.

Chinese provincial official gets life in prison for graft

A senior manager at a subsidiary of China Integrated Circuit Industry Investment Fund was placed under investigation, joining a growing list of executives brought down by an unfolding anti-corruption crackdown that is sweeping the country’s semiconductor industry.

Chen Datong, a managing partner of Yuanhe Puhua (Suzhou) Investment Management Co. Ltd., was detained by authorities earlier this month and has remained out of contact, several people familiar with the matter told Caixin. Chen’s mobile phone has remained off over the past two weeks, they said.

While continual Covid-19 outbreaks continue to make their mark on earnings season, one commodity is still raking in cash: top-shelf baijiu.

By Caixin’s count, 19 publicly traded manufacturers of the world’s most popular alcoholic beverage reported their first-half earnings as of Monday, with 16 posting growth in both revenue and profit.

Wang Dengfeng, a senior official at the Ministry of Education responsible for promoting soccer, is being investigated by graft busters as the country pursues its campaign to stamp out corruption, including in the education system.

Wang, head of the ministry’s department of physical, health and arts education, is suspected of “serious violations of discipline and law,” a phrase used to refer to corruption, according to a one-line statement (link in Chinese) published by the Central Commission for Discipline Inspection Tuesday.

Baidu swings back to profit even as revenue slips