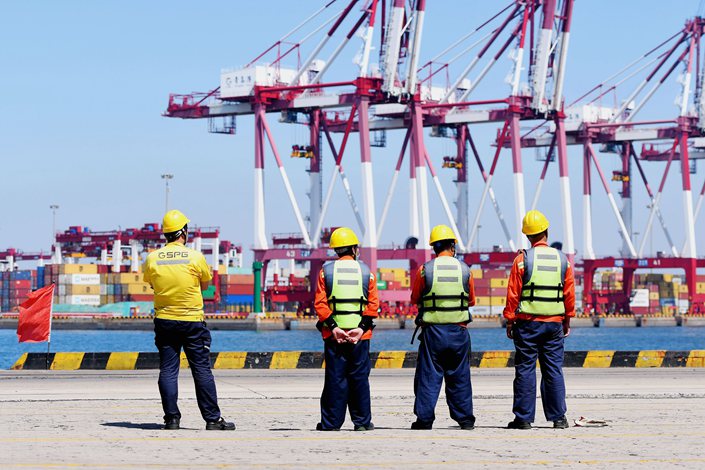 Dock workers wait for ships to come in at a foreign trade container terminal at the port of Qingdao in East China’s Shandong province. Photo: VCG

China’s headline export growth decelerated sharply to 7.1% year-on-year in August, from 18% in July, landing well below the expected 13%. Import growth dropped to 0.3% from 2.3% year-on-year growth in July (compared with the expected 1.1% growth). The monthly trade balance narrowed further to $79.4 billion from $101.3 billion in July, as compared with a Bloomberg consensus of $92.7 billion.

High-frequency cargo throughput data also reflects sharp slowdown in trade growth. Foreign trade-related cargo volume dropped to a year-on-year contraction in the last 10 days of August. In terms of survey data, the National Bureau of Statistics’ PMI new export orders index remained below 50 at 48.1 despite a slight bounce in the month. On the other hand, the Caixin PMI new export order index dropped to 48.6 from 50.7.

Shipment growth to major destinations all softened, that to ASEAN outperformed

Exports growth to the Group of 3 (the U.S., EU, Japan) moderated to 3.8% year-on-year from 17% year-on-year in July. Interestingly, shipments to the EU still held up with double-digit growth close to 12% year-on-year, whereas that to the U.S. fell significantly, shrinking by 3.8% (compared with a prior figure of 11% growth).

Export shipment growth to the ASEAN economies remained as the highest among all major destinations, at 25.1% year-on-year versus a prior figure of 33.5%. On top of the favorable base effect, such resilience reflects relatively robust economic activity in the region. On the other hand, shipment growth to economies in North Asia, South Korea, and Taiwan weakened significantly too.

Shipments of IT products suffered a wider contraction, by 5.7% year-on-year versus prior contraction of 2.7%. Shipment value of mobile phones managed to swing up to 21.5% growth, with a low base factor behind this uptick. The shipment level does not suggest large upswings from deliveries related to the new smart phone product season yet. Shipment growth of computers, ICs and panels all moderated further to show a wider annual contraction.

Given the deliveries for the new product season, the growth of mobile phone exports could still jump up in the coming months to support IT basket export growth and even overall export growth. However, we doubt the sustainability of an export growth rebound driven by mobile phone shipments. The overall consumer demand momentum for IT goods seemed to be weakening and the statistical base for the IT basket has been set rather high.

Shipment growth for other major product groups all moderated. Shipments for the consumer goods basket slowed significantly to 2.4% year-on-year from 17.6%. The set of goods related to going out, such as suitcases and shoes, continued to record the strongest growth rates of the consumer basket — 24% for the former and 16% for the latter. Exports of household durables, such lamps and furniture, started to show a large (double-digit) contraction given the high base and softened demand level. Shipments growth for anti-Covid goods decelerated. A slowing of the summer omicron wave could be a factor behind this change.

Import growth of items in the key commodities basket recorded a 2.6% year-on-year contraction, versus 6.5% growth in July and 24% growth in the second quarter. Higher base and soft sequential momentum both contributed to the rapid deceleration. The still soft sequential momentum reflects the still lack of meaningful improvements in commodity-intensive activities at home, such as property construction and traditional infrastructure. The property sector remained in a serious downturn, dragging down related commodities demand. Traditional infrastructure investment was unable to fully make up for the shortfall.

Oil import growth softened further to 27.9% from a prior of 38.9%, with slower import price growth and a largely unchanged year-on-year imports volume contraction. Natural gas imports moderated too. Imports of iron ore contracted on a year-on-year basis, but copper ore imports swung into mild growth thanks to improved volume growth. Soybean imports contracted by 6.9% (from 15.7% growth).

Other key import baskets weakened too. Imports of machine tools dropped back into contraction, shrinking by 22.5% year-on-year after growing by 5.7% in July. Import growth in IT components remained at contraction, which widen to 11.4% versus a prior contraction of 3.1% year-on-year. Even the new smart phone product launch scheduled in September, the August import figure does not seem to suggest that the supply chain has been significantly loading up inputs from overseas.

External trade growth data has been showing consistent signs of slowing down, according to recent data points. For example, South Korea’s export growth fell to 2.2% year-on-year per working day in August, down from the prior number of 14.2% year-on-year. Exports from Taiwan also show visible signs of slowing down. The group of survey data — such as developed markets PMI new orders, emerging markets new export orders — mostly showed further signs of order weakness.

Downward growth pressure in the developed economies seemed to be gradually reflected in slower global trade growth. We expect export growth to remain soft ahead, though our full-year export growth forecast at 8.5% could still face some upside risk given the relatively high shipment levels recorded in previous months.

Another wave of CNY/USD depreciation

The People’s Bank of China announced it will to lower foreign exchange reserve requirement ratio from 8% to 6% this week, effective from Sept. 15, suggesting that authorities are attempting to cushion against the currency depreciation momentum. Given the USD DXY strength and the slowing export momentum, we continued to expect CNY weakness against the U.S. dollar in the coming months with two-way fluctuations. We do see the probability of the CNY breaking 7, but ending the year below 7 at 6.90.