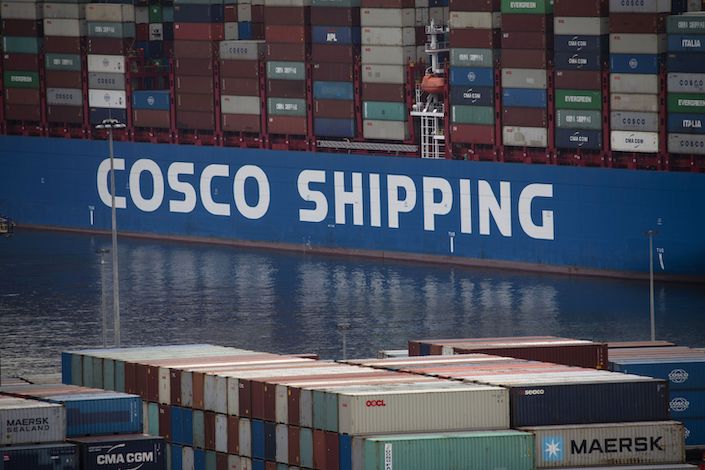 In Depth: Cosco alters course in the face of shipping headwinds

As the global shipping industry runs out of steam from the pandemic boom, China’s state-owned giant Cosco Shipping Holdings Co. Ltd. is pouring billions of dollars into a strategic shift.

The world’s fourth-largest operator of container ships is expanding its stakes in mammoth cargo-handling ports including an investment in Germany’s Port of Hamburg. It’s also investing in new dual-fuel container ships, getting into the massive automotive manufacturing supply chain business, and repositioning itself as an investment platform and logistical solutions supplier.

China plans to remotely set up a lunar base likely to be powered by nuclear energy by 2028 before attempting to land astronauts on the moon several years later. Beijing is looking to its lunar exploration program to vault it into the ranks of other major space powers.

“(We) hope our astronauts will be able to go to the moon in 10 years,” said Wu Weiran, chief designer of China’s lunar exploration program during an interview Monday with state broadcaster CCTV.

China’s “Big Six” state-owned commercial banks have offered at least 925 billion yuan ($130 billion) in credit lines to property developers, most of which qualify as high-quality players, in a move to help curb risk contagion amid a liquidity crunch in the battered real estate sector.

The moves, in response to regulatory calls, are expected to lift the market in the short term and prevent credit risks from spreading to leading property developers, analysts said.

Prosus NV, the Dutch unit of Tencent Holdings Ltd.’s largest shareholder Naspers Ltd., said it will consider selling the $4.6 billion of Meituan shares it will receive from Tencent as a special dividend.

South African media giant Naspers owns about 28% of the Chinese internet giant indirectly via Prosus. On Nov. 16, Tencent announced a special distribution of 958 million Meituan shares to shareholders. Naspers will receive nearly 262 million shares. Based on Meituan’s closing price Wednesday of HK$138.4 ($17.70) a share, the dividend will be worth about HK$36.1 billion ($4.6 billion) to Naspers.

Electric-vehicle (EV) giant BYD Co. Ltd. will raise prices for several of its vehicle models in China, citing the expiration of government subsidies and the rising cost of EV battery raw materials.

BYD will hike the prices of models in its Dynasty, Ocean and Denza series by between 2,000 yuan ($280) and 6,000 yuan each starting next year, according to a post on the firm’s official Weibo Wednesday. BYD said it will disclose the exact pricing at a later date.