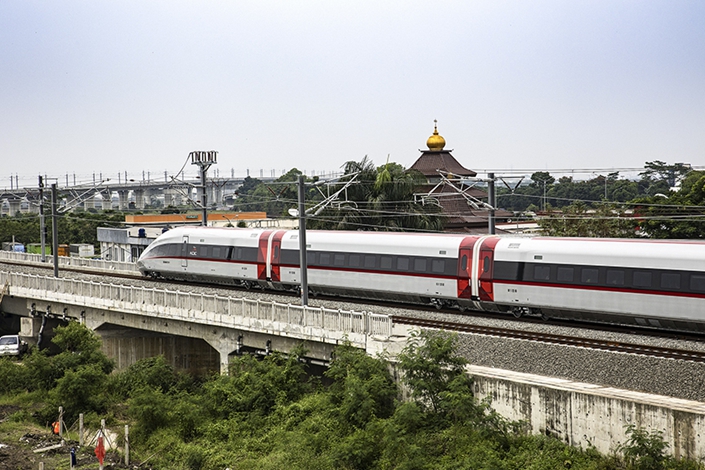 A high-speed train runs along the Jakarta-Bandung railway in Bandung on Nov. 9. Photo: VCG

A silver-bodied high-speed train decorated with a flash of red rolled slowly out of the Tegalluar station in Bandung, Indonesia’s West Java province, last month, and everyone applauded.

The spectators included Chinese President Xi Jinping and Indonesian President Joko Widodo. They witnessed the operational trial of the Jakarta-Bandung high-speed train Nov. 16 on the sidelines of a bilateral meeting following the G-20 Summit in Bali.

The Jakarta-Bandung railway is a landmark project under China’s Belt and Road Initiative as the country expands its presence in Southeast Asia. It also represents a key step in the Indonesian government’s infrastructure push.

China’s demand for Pfizer’s Paxlovid skyrockets, but supplies are limited

China’s rapid unwinding of Covid restrictions has triggered a wave of stockpiling of antiviral drugs such as Paxlovid, which is made by U.S. pharma giant Pfizer Inc., but access to the drug remains limited due to the low domestic supply.

On Tuesday, Chinese health care company 111 Inc. began selling Paxlovid on its app for 2,980 yuan ($427) per box, but just hours later the pill was pulled from the online store.

The Shanghai and Shenzhen stock exchanges are set to rank first and second among global bourses by IPO fundraising in 2022, with Hong Kong close behind, after a year of extreme volatility and risk-off sentiment in equity capital markets, according to a recent report.

The deputy director of the provincial radio and television bureau in Southwest China’s Yunnan is being investigated for alleged corruption, according to the country’s top anti-graft watchdog.

Wu Hao, who is also a member of the bureau’s party leadership group, has been placed under review for suspected “serious violations of discipline and law,” a common euphemism for corruption, the Central Commission for Discipline Inspection said in a statement published late Tuesday, quoting Yunnan anti-graft authorities. It did not elaborate on Wu’s alleged wrongdoing.

China’s Gen-Z is entering the workforce. Employers are terrified

PSA is reviewing its portfolio against the backdrop of geopolitical change and declining global trade demand, the sources said. The evaluation is in an early stage, and the price is unknown, they said.

The port operator bought its 20% CK Hutchison stake in 2006 for $4.4 billion. The move to sell partly reflects the limited appreciation potential for the assets, the sources said.

China’s major logistics companies are taking a series of increasingly desperate measures to tackle a growing backlog of undelivered orders in Beijing, including adding manpower and offering financial incentives to couriers as more people in the capital turn to online shopping amid a worsening Covid-19 outbreak.

JD Logistics Inc., the courier arm of e-commerce giant JD.com Inc., has enlisted over 1,000 additional couriers from 16 provincial-level regions including Shanghai, Guangdong and Sichuan to help with parcel deliveries in Beijing, with hundreds more expected to be sent to the city later this week, Caixin has learned. The company has also extended delivery hours at night.

Consumer demand for babies’ and children’s nutritional products is changing, and there are already a number of other companies well positioned to provide such products and services in the Chinese mainland, Abbott said.

Parking gets a tech makeover