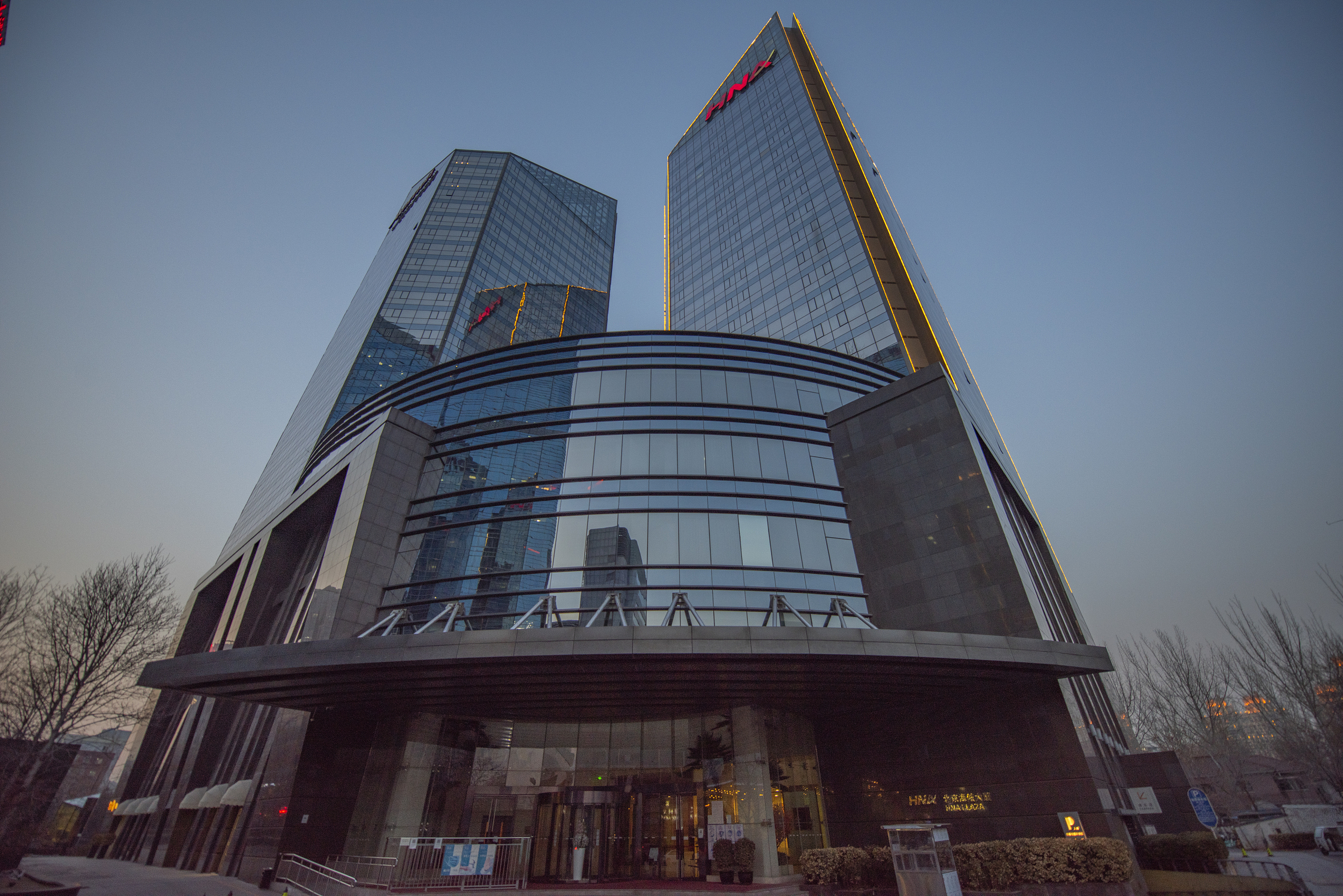 Restructuring will wipe out equity stakes apparently now held by two shadowy charities, co-founder Chen Feng and other executives, but ownership has always been opaque

The bankruptcy of former high-flying conglomerate HNA Group Co. Ltd. will wipe out the equity of its founders and major shareholders in the sprawling enterprise that at its peak counted 1.2 trillion yuan ($171 billion) of assets.

But who actually owns the conglomerate has never been transparent. It took five years for Caixin reporters to trace who the shareholders are and how their holdings have changed over the past 30 years through complex corporate structures and asset reshuffling.

Based on information released by HNA in July 2017, the company’s two largest shareholders are two shadowy charitable funds. One, the U.S.-registered Hainan Cihang Charity Foundation, held 29.5% of the company while a similarly named foundation based in Hainan held 22.75%. After the 2018 death of co-founder Wang Jian, his 14.98% went to the domestic foundation, giving the charities a combined 67.23%. Co-founder Chen Feng is the biggest individual holder with 14.98%. “If not for building HNA, I would have been a billionaire long ago.” Wang Jian

Chen and the two mysterious foundations would thus appear to be the biggest prospective losers as the insolvent company faces a court-supervised bankruptcy reorganization. Creditors of HNA last month petitioned a court to order a restructuring after the company failed to repay trillions of yuan in debt.

Under a plan intended to repay creditors over the next five to eight years, all the stakes held by the two charitable organizations and HNA executives will be wiped out, leaving HNA Group’s ownership in the hands of creditors and strategic investors. The conglomerate’s demise grew out of years of aggressive, highly leveraged global acquisitions followed by China’s tightened control over private conglomerates’ overseas investments since 2017. 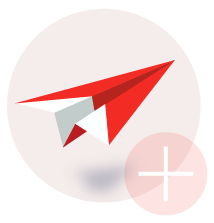 The long and opaque history of HNA Group’s ownership starts with a predecessor company’s founding in 1989 as a state-owned airline in southern China’s island province Hainan. Although the provincial government put in 10 million yuan as seed funding, co-founder Wang publicly disputed the idea that HNA started with government funding.

Hainan Airlines, with only 10 million yuan of startup capital but no airplanes or civil air transport license, failed to start operating under several leaders, and the business was actually set up by a new team of founders from Beijing with civil airline backgrounds, Wang told Caixin in a 2018 interview.

The team included Wang, Xiao Zengli, Chen Feng and Li Jing, who all used to work at the Civil Aviation Administration of China, the country’s aviation regulator. In the early days, to cover expenses at the airline, these managers founded five affiliated companies in sectors such as tourism, real estate and trade.

“If not for building HNA, I would have been a billionaire long ago,” Wang told Caixin. The tycoon died in a 2018 accident in France. 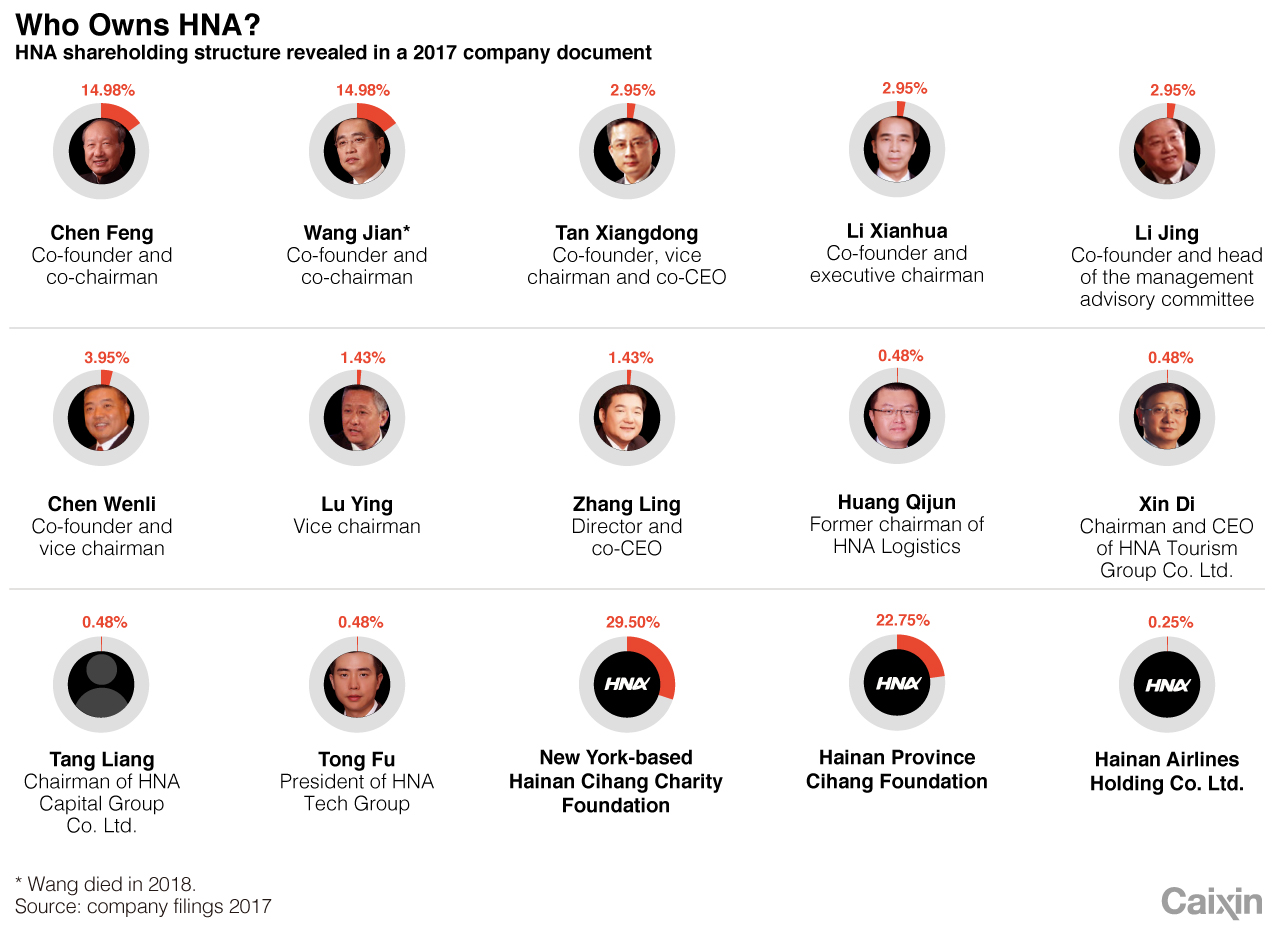 State out, founders in

In 1992, when Hainan became one of the first provinces to test joint-stock ownership restructuring of state-owned enterprises, Hainan Airlines became China’s first joint-stock airline. The restructuring raised 250 million yuan from 122 shareholders and left the Hainan government with a 5.3% stake. The new shareholders included private and state-owned investors such as Xingnan Group and Bank of Communications Co. Ltd. The affiliated companies founded by the early managers were each allocated 3 million shares of Hainan Airlines’ 250 million total shares. Although Chen personally held only 32,000 shares and Wang 28,000 shares, they controlled the company as president and vice president.

Since then, Hainan Airlines developed in tandem with its forays into China’s nascent capital markets, and Chen and Wang gradually became major shareholders through a series of related-party transactions. “We call it a game of ‘10 pots and seven lids.’ As long as there are no problems in operation, the pots will keep boiling. But if you get down to five lids only, there will be a problem.” A Hainan provincial official

In 1995, Hainan Airlines became China’s first joint-venture carrier by selling a $25 million stake to American Aviation LDC, backed by billionaire investor George Soros. When Hainan Airlines listed its B-shares on the Shanghai Stock Exchange in 1997, American Aviation was listed as its single biggest shareholder with 21.23%, while the Hainan government’s holding shrank to 3.4%. The company has since gone through several rounds of restructuring, and the state shareholders gradually withdrew.

Soros was not happy with the investment as he didn’t obtain governance and supervision rights as a shareholder in the Chinese carrier, according to people close to Soros. In 2011, his American Aviation transferred its stake to Wang, Chen and other company executives, according to Wang. Terms of the deal weren’t disclosed.

After Hainan Airlines became a publicly traded company, Wang and Chen still personally owned minor stakes, but Hainan Qixing Industrial Investment, a company controlled by Chen and Wang, was listed as the second-largest shareholder. The transactions in which Qixing acquired Hainan Airlines’ shares raised questions as the purchase price was nearly 20% lower than the market price. But a lawsuit brought by individual shareholders dragged on for eight years before it was dismissed by a court. 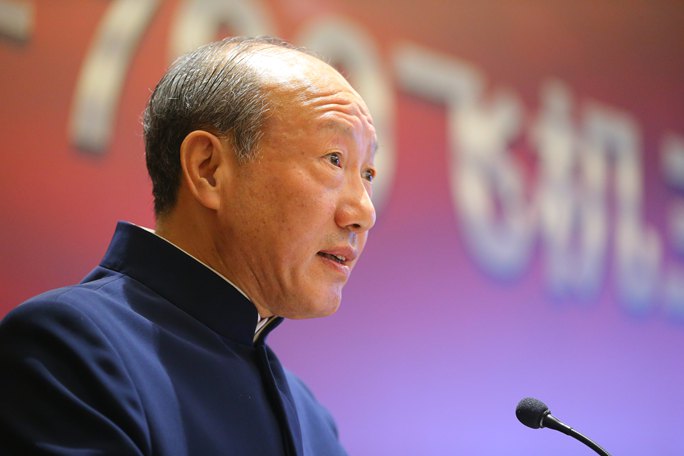 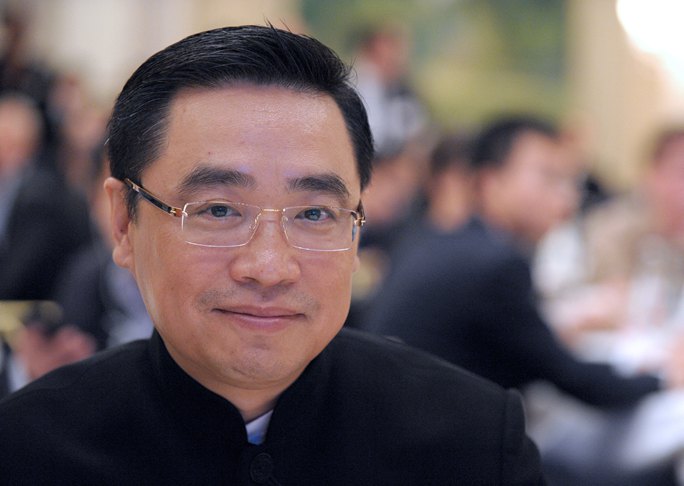 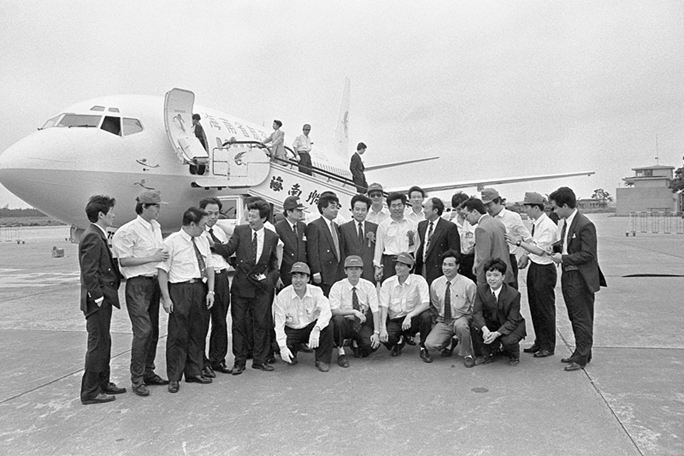 Chen (left), along with Wang Jian, founded HNA in 1993. The photo shows the two co-founders at a meeting in Haikou in April 2013 that marked the 20th anniversary of the company’s founding.

HNA flags fly at half-staff in front of the company’s headquarters in Haikou on July 5, 2018. Two days earlier, Wang died after falling from a high wall in a French village, Bloomberg reported. He was 57.

Too big to fail

The acquisitions also stretched the company’s capital chain to the limit. Especially in the 2003 SARS episode, HNA’s business was in a slump, with a loss of 1.5 billion yuan, five times the average of its peers, and a debt-to-capital ratio as high as 90%.

As a “too-big-to-fail” company, HNA asked for help from the government. In 2005, the Hainan government injected 1.5 billion yuan into the company, accounting for 10% of the province’s annual fiscal revenue at the time.

When HNA was hit again by the 2008 global financial crisis, the company swung to a net loss of 1.73 billion yuan in the second half that year from a net profit of 310 million yuan in the first half. There are suspicions that the company deliberately reported losses to seek a government injection, as its nearly 90% debt-to-assets ratio made it impossible to obtain additional bank loans. Eventually, the Hainan government injected another 1.5 billion yuan. 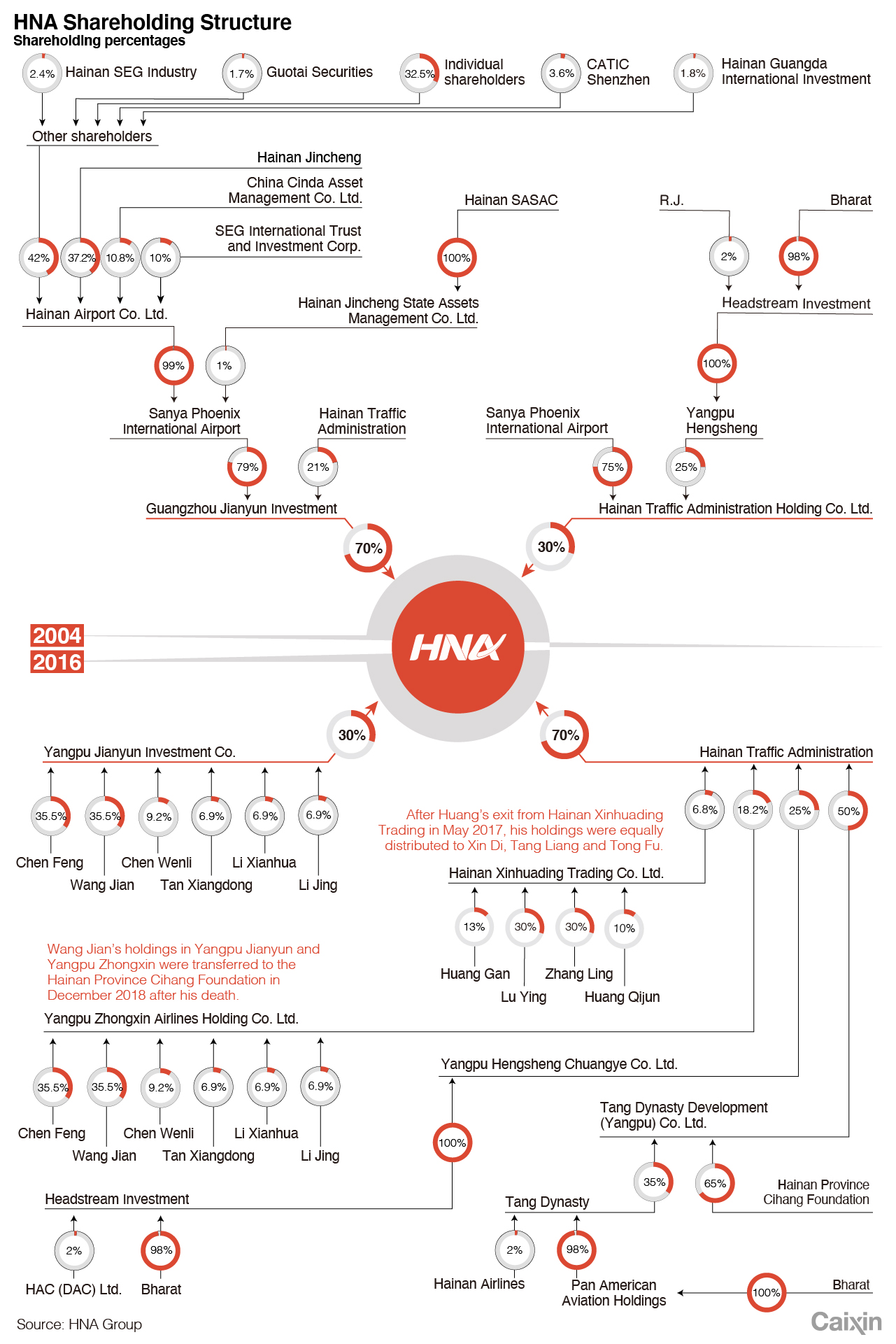 With HNA Group’s development, many of its sprawling subsidiaries listed their controlling shareholder as an HNA trade union, a shadowy organization that had nothing to do with the group’s employees. HNA never publicly disclosed who actually controlled the union. As China’s securities regulator requires that unions can’t be shareholders of publicly listed companies, HNA in 2000 set up the Hainan Province Cihang Foundation with a 20 million yuan donation from HNA Group. The charity displaced the union to become the ultimate controlling shareholder of HNA Group.

According to HNA, the foundations aim to support a variety of causes including anti-poverty efforts, but the company has never disclosed what specific charitable activities the foundations have been involved in, nor has it disclosed their assets or cash usage. 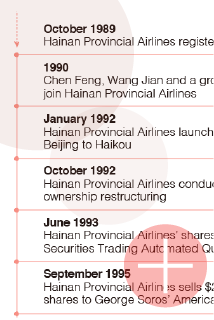 The foundation looks like an advisory group composed of retired officials from Hainan’s political, legal, financial and taxation systems. For example, its first chairman, Zeng Haorong, was a former mayor of Haikou and the head of the Hainan provincial high court. But one founding investor in the foundation is a Beijing-based advertising company controlled by Wang’s brother Wang Wei.

Behind the Hainan Cihang Charity Foundation registered in New York is a mysterious figure, Guan Jun, who was a childhood friend of Chen’s son Chen Xiaofeng. Wang said in 2017 that Guan got the HNA stake from Indian businessman Bharat Bhise, who acted as an offshore consultant for HNA and obtained the stake from the company as a gift.

But later, when HNA acquired Swiss airline catering provider Gategroup Holding AG and was required by Swiss regulators to clarify its ownership structure, HNA said the stakes held by Bhise and later by Guan were actually held on behalf of six HNA founders, including Chen and Wang.

HNA executives have donated their stakes held by Bhise and Guan to the Cihang Foundation in Hainan province, and HNA has also promised that deceased executives will donate all their equity to the foundation after their death as Wang did.