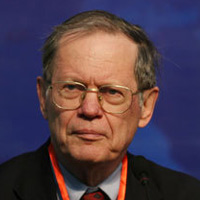 Roughly every four years, for the past 20 years the National Intelligence Council, an analytical think tank within the U.S. government, produces a report on global trends over the next decade or two. The latest report was issued in early January, running to 2035, but also addressing the next five years.

The first report, released in 1996, was written to provide a likely political setting for the quadrennial defense review mandated by the U.S. Congress, but the practice of informed conjecture about the future has continued.

This report makes sobering reading, especially for the near future. It foresees slower global economic growth over the next five years, associated with increasing public disappointment with the ability of governments to assure growing prosperity and, given fiscal pressures, even to meet public expectations with regard to the provision of public services such as education, public health and personal security.

In this period, activities by terrorist organizations and even individuals are likely to increase, further undermining public confidence in governments. On the international scene, Russia and China are likely to become more assertive, particularly in their neighborhoods, but even further afield to promulgate their views and to engage in cyber probes.

Over the next two decades, the report assumes developments are likely to be strongly influenced by several global trends: changing demographics, advancing but disruptive technology, changing identities among many people, and worsening environmental conditions, especially air pollution, increasing scarcity of water, and climate change.

The entire world is aging, but at greatly different rates. The oldest country in 2015 was Japan, with a median age — half of the population below, half above — of 46.5 years; this is expected to rise to 52.4 years by 2035 based on projections by the United Nations Population Bureau. Over those two decades, Iran is expected to age the most rapidly, by 11 years. But South Korea and China are not far behind, each aging by nearly nine years. China’s median age will rise from 37 years in 2015 to an estimated 45.7 years in 2035, still behind Japan but closing in on it. (These projections were made before China changed its one-child policy to a two-child policy in late 2016, which might reduce the rate of aging.) The United States is also aging, but only by three years over this period, largely due to expected continued immigration of mainly young adults.

While all countries are aging, total populations are growing at very different rates. In particular, sub-Saharan African and some Muslim countries are continuing to grow rapidly, with sharp increases in people of working age. In numerical terms, India, Nigeria and Pakistan will together increase their working-age populations by 350 million people, who will expect to find jobs to earn for themselves and their children, especially males but increasingly also females. Providing such jobs will be a major challenge for these countries — and for others with lower total numbers.

Disillusioned and frustrated young adults provide fodder for criminal or radical groups, some of which are likely to embrace violence against society. And many will be tempted to migrate to more-prosperous countries, possibly leading to even greater migrations than we have seen in recent years. Another demographic feature is the excess number of young males in some societies, especially India and China but also including several sub-Saharan African countries, making it impossible for many young men to marry.

Technical change will continue apace, creating new opportunities but also disrupting traditional activities, and thereby proving unsettling. The report singles out changes in biotechnology, particularly the sharp reduction in the cost of sequencing and manipulating genes, which could lead to great potential improvements in health and in agriculture. Also seen are improvements in computation and communication, particularly in artificial intelligence and the development of robots that can replace many functions traditionally performed by humans; and new sources of energy, which will reduce vulnerability to disturbances in world oil markets, especially benefiting India and China.

With respect to ideas and identities, the report notes: “Populism will increase. … So too will exclusionary national and religious identities, as the interplay between technology and culture accelerates and people seek meaning and security in the context of rapid and disorienting economic, social, and technological change.” People will select the increasingly available information that reinforces their identities, to the exclusion of other sources of facts and judgments.

The report puts considerable emphasis on climate change, leading in this period to distress from more extreme weather events such as heat waves and droughts to rises in sea level that will affect increasing numbers of coastal cities, and to growing scarcity of water, especially in the Middle East, which of course is also due to growing human demands for water. Climate change will also alter the range of vectors for both animal and human diseases, and will threaten future diversity of the biosphere, already under severe threat from other human activity. Air pollution, already high in some parts of the world, will also increasingly plague and enrage people.

The report does not provide a unique projection for 2035, but rather three scenarios, particular histories provided by a notional future economist, national security adviser, and Canadian city mayor of what has transpired in the previous two decades. They are of course only three of many possible scenarios, which rather than trying to foretell the future are designed to stimulate the imagination about possible outcomes — some positive, some negative. In one scenario, high tensions between India and Pakistan lead to armed conflict and the use of a nuclear weapon. But the prospective dangers for everyone lead the U.S. and China to join forces to successfully mediate a de-escalation of the conflict. The report is thought-provoking.