If Grandma Is Still on the Job, Will Daughters Skip Having Babies?

By Zhang Congzhi and Li Rongde 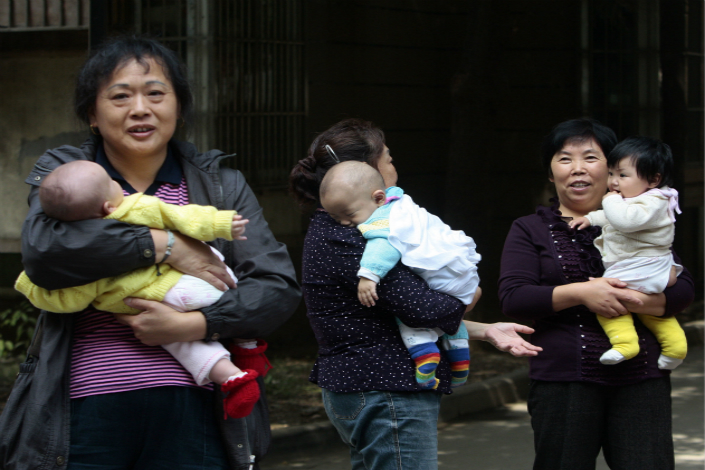 Academics warn that working mothers may opt to have fewer children if their parents retire later because so many Chinese grandparents help raise their grandchildren. Above, seniors look after children in October 2011 in Nanjing, Jiangsu province. Photo: Visual China.

(Beijing) — Pushing up the retirement age may undermine government efforts to encourage families to have a second child because grandparents play a key role in child care, academics warn.

The ruling Communist Party scrapped China’s one-child policy in 2016 to ease future labor shortages and reduce the economic burden of an aging population.

At the same time, the government was working on the details of how to incrementally postpone workers’ retirement age. At present, China’s official retirement age for most men is 60. For women, it is 55 for civil servants and employees for state enterprises, and 50 for others. Once the rules take effect in 2022, the retirement age will be gradually increased to 65 years for men and 60 for women over a 30-year period.

But, Chinese families have traditionally relied on grandparents for support with child care given the low number of state-funded child care facilities and the rising cost of private daycare centers. The new pension policy may cut off this lifeline and force young mothers to leave the workforce, according to professor Dong Xiaoyuan from the University Winnipeg in Canada and professor Zhao Yaohui of Peking University, who co-authored a report on child support and gender.

The sweeping change in retirement ages and family planning rules will also lead to greater gender inequality as Chinese women would be more torn between career development and commitment to their families, the researchers said.

Working women in China spent 43 hours a week on average at the workplace — three hours less than their male counterparts — but they spent twice the amount of time, or 21 hours, as men on household chores, including child care, according to Qi Liangshu, associate professor at Tsinghua University in Beijing.

Working mothers were already struggling to find time to rest or follow their hobbies, according to Liu Lan, a professor of demographic studies at Peking University.

Amid rising pressure at home and at work, many women might choose to remain childless or to have only one child, which would deal a blow to government efforts to boost the country’s birth rate, said He Dan, head of the China Population and Development Research Center.

“I would have never survived without the enormous help of my parents over the years,” said Li Yan, a mother of two girls aged 3 and 7.

Li, 35, qualified to have a second child in 2014 when the government first eased the one-child rule to allow couples in which either member was an only child to have two children.

“But I wouldn’t have dared to have a second child or a child at all if my parents had retired late,” she said. “Without my parent’s support, I may have ended up becoming a full-time mother and our standard of living would have been lower.”

More than 16% of China’s population is over 60 years old, and one in 10 people were over the age of 65 at the end of 2015, according to government statistics, meaning China is quickly growing gray at its temples.

The government’s efforts to ease family planning restrictions and postpone the retirement age both aim to reduce the impact of an aging population on the economy, but policymakers must be careful that doesn’t undermine the other, researchers said.