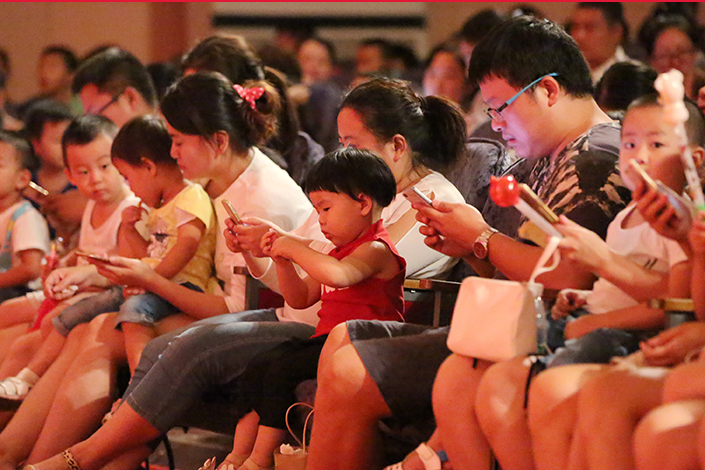 Smartphone makers sold 110.1 million units in China in the three months through June, essentially unchanged from the 109.7 million units shipped in the same period in 2016. Photo: IC

The number of smartphones sold in China was flat in the second quarter, as the world’s largest market showed signs of saturation after years of booming sales fueled by cutthroat competition.

But the situation is likely to pick up later this year, and overall sales value is likely to grow as more consumers trade up from cheap models that have flooded the market in the last two years to higher-end, better-performing smartphones, analysts said.

Smartphone makers sold 110.1 million units in the three months through June, essentially unchanged from the 109.7 million units shipped in the same period a year earlier, according to data tracking firm GfK. The figure lagged behind the global growth rate, which saw unit sales rise 4% to 347 million units, fueled by strong advances in emerging markets like India.

But while unit volume was flat, the value of smartphones sold in China during the period actually rose 8%, reaching $35.1 billion. The market is now by far the world’s largest, accounting for nearly a third of all sales on both a unit and value basis.

GfK attributed the latest quarter’s flat performance in unit sales growth to saturation of a market where nearly all of the country’s 1.3 billion people now have mobile accounts.

“However, as we’re seeing in other regions, higher-priced new products are pushing up market value,” GfK said. “GfK forecasts smartphone demand in China to total 461 million units in 2017, an increase of 2% percent year-on-year. The growth in U.S. dollar value terms is expected to be considerably higher, at 11% year-on-year.”

GfK didn’t break out figures for individual brands, but China’s top five in the first quarter were Huawei, Vivo, Oppo, Apple and Xiaomi, in that order, according to data tracking firm IDC, which will release its own second-quarter global rankings next week.

“We expect the second half of the year to see higher shipments compared with the first half, though nothing dramatic,” said IDC analyst Tay Xiaohan. She added that the top five in China should stay relatively unchanged for the rest of the year, though the recently rebounding Xiaomi could potentially move up to fourth place if it maintains its momentum.

She said that Apple could also move into the top three by the end of the year after the release of its latest iPhone expected later this year.