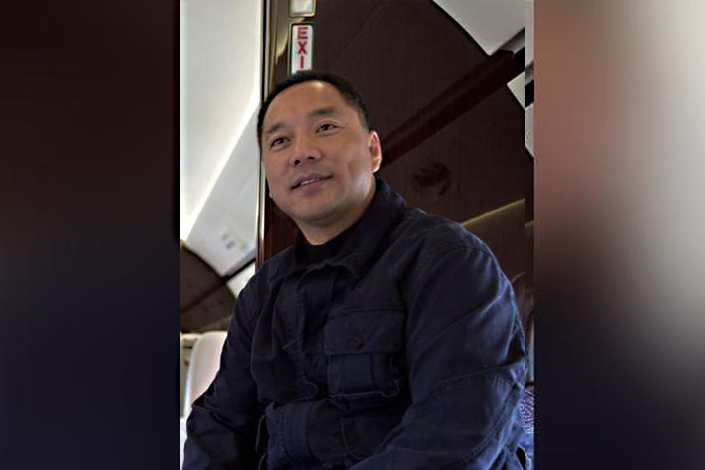 Fugitive businessman Guo Wengui used Alfa Global Ventures, one of his companies, as collateral for loans he took out in 2015 from Abu Dhabi investors for the second of two $1.5 billion investments in an investment fund. Guo later lost control of Alfa as a result of that pledge.

Fugitive Chinese businessman Guo Wengui’s business empire continues to unravel, as he recently lost control of a $3 billion investment fund established with the support of the Abu Dhabi royal family after he bought luxury items, including a yacht, and made an unsuccessful investment in the Hong Kong stock market.

Guo used Alfa Global Ventures, one of his companies, as collateral for loans he took out in 2015 from the Abu Dhabi investors for the second of two $1.5 billion investments in the ACA Investment Fund. Alfa Global was transferred to a company owned by the Abu Dhabi royal family on Feb. 14, according to business documents Caixin has seen.

Because Alfa held half of Guo’s rights and benefits in the fund, Guo lost his control of the fund. The management has been reshuffled, with Abu Dhabians taking the important seats, Caixin has learned.

Guo and the Abu Dhabi royal family created the fund in December 2014 with the help of then-State Security Vice Minister Ma Jian.

The Abu Dhabians agreed to provide the first phase of fund of $3 billion in the form of loans to Guo’s companies, Alfa Global Ventures and Alfonso Global, through which Guo serves as a limited partner. Guo also held a 70% stake in the fund management company, ACA Investment Management Ltd.

The Abu Dhabians held a 20% stake in ACA through a company called Roscalitar2, according to documents seen by Caixin. The remaining 10% was owned by Yu Jianming, the then-Greater China chief of financial group Macquarie, according to the documents.

After Guo obtained the first loans totaling $1.5 billion, he did not put all money to investment as he promised. He transferred a significant amount of the money to other companies to repay debts, and also used the money to purchase a yacht and to renovate his luxury residence in New York.

When the Abu Dhabians learned what Guo had done, they demanded he sign an additional agreement on May 21, 2015, that pledged Alfa Global as collateral for the second payment of $1.5 billion, which was made later.

Property tycoon Guo, who held controlling stakes in Beijing Zenith Holdings and Beijing Pangu Investment, was listed by the Hurun wealth report in 2014 as the 74th-richest Chinese citizen, with 15.5 billion yuan ($2.29 billion) in personal assets.

Guo was good at making use of his government connections, including his close ally Ma, to expand his business in China. However, Guo had to flee to the U.S. in 2014 after Ma was put under investigation for suspected corruption.

Guo continued his business operation from outside of China, including reaching the deals with the Abu Dhabi royal family and making investments in the Hong Kong stock market.

In May 2015, at the peak of China’s stock market, Guo purchased 1.44 billion shares of Hong Kong-listed Haitong Securities, making use of about $2 billion from the ACA fund, along with more than $1.2 billion investment from financial service companies UBS and Morgan Stanley.

The Chinese stock market crash in July that year dealt a major blow to Guo’s stocks. He lost nearly $1 billion, partly because UBS issued a margin call and sold a big chunk of his stocks, and the remaining stocks he held also lost more than 20% of their book value.

In 2015, Guo also pledged his Genever Holding company based on the 18th floor of the Sherry-Netherland hotel on Manhattan’s Fifth Avenue, where he was still living as recently as this month. He has put up the whole-floor apartment for sale for $78 million.

A hedge fund affliated with Hong Kong investment firm Pacific Alliance Group asked the New York State Supreme Court on July 7 to prevent the sale of the property, citing concerns that Guo is attempting to leave the U.S.

In another development, Chinese actress Fan Bingbing filed a defamation lawsuit on Monday against Guo in New York.

In the complaint submitted to the Supreme Court of New York State, Fan stated that Guo made false, defamatory, and offensive statements accusing Fan of having an affair with a high level Chinese government official and accepting bribes to help secure bank loans and government approval for real estate building contracts in China.

“These claims have no basis in reality and are fraught with unsupported, wild, and defamatory allegations that were calculated to cause maximum harm to Fan,” the lawsuit says.

Earlier this month, Fan posted on her social media account that she would hire the well-known law firm Lavely & Singer to sue Guo. Lavely & Singer is known for handling lawsuits for Hollywood celebrities, including Arnold Schwarzenegger and Sylvester Stallone.

Fan is demanding that Guo publish a retraction, apologize and pay her damages.