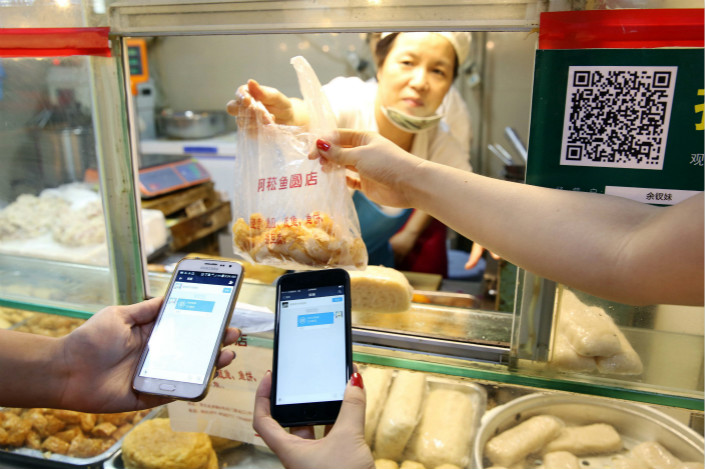 More than 39.42 trillion yuan was paid via mobile devices in the second quarter this year, up 33.84% from a year ago, the People's Bank of China said. Above, customers take their purchases after paying via mobile-payment service Alipay at a market in Wenzhou, Zhejiang province, in September 2015. Photo: IC

More transactions went cashless in China in the second quarter.

From April through June, 949.82 trillion yuan ($145.2 trillion) worth of transactions were settled without cash changing hands, up 1.02% from the same period in 2016, the central bank data show. But the volume of cashless payments rose more sharply, up 32.3% from a year ago to 36.90 billion transactions.

More than 39.42 trillion yuan was paid via mobile devices in the second quarter, up 33.84% from a year ago, the central bank said. Of that amount, 31.49 trillion yuan was spent using smartphones to scan QR codes to make payments via nonbank channels, or so-called third-party payment service providers. Such third-party payments were up 34.9 % from the same period last year and have seen an explosive growth in China.

China has long been trying to crack into the world of online payments. The latest measure to gain as much access to transaction details as possible was the creation of a clearinghouse dedicated to third-party online payments, the first of its kind in the world, which went live in June. The new platform essentially cuts the direct link between third-party payment providers and banks, with the People’s Bank of China being the sole intermediary for clearance of all online transactions.

Before the clearinghouse came into existence, most online payments in China are handled separately under different terms between payment service providers and banks. This practice has raised concerns because it is difficult for banks to maintain consistent standards and control risks, with the online payment market seen as potentially a hotbed for money laundering and other cybercrimes, and out of regulators’ reach.

In the second quarter, Chinese commercial lenders handled 34.1 billion card transactions, which involved 183.2 trillion yuan, up 33.14% and 3.79% respectively from a year ago.