China to Roll Out Red Carpet for Foreign Financial Firms 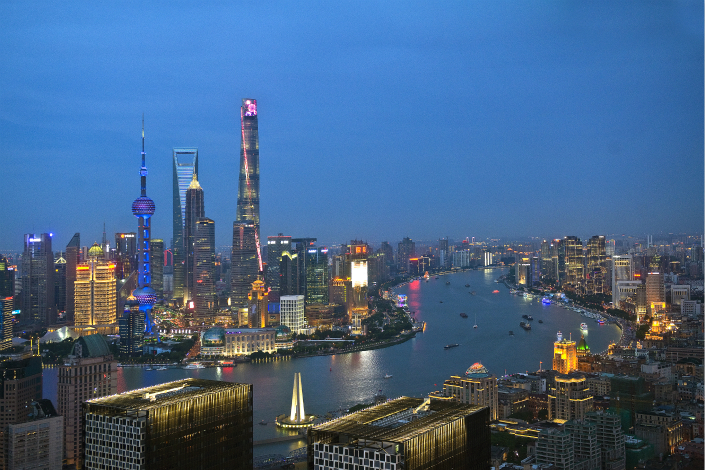 Skyscrapers in the Lujiazui Financial District overlook the bund in Shanghai on Sept. 4. Photo: Visual China

China plans to grant overseas investors greater access to its financial market, in a bid to invigorate the country’s financial services sector.

Foreign companies will be allowed to own a majority stake — up to 51% — of any joint venture in the securities, funds, and futures industries, up from a current cap of 49%, Vice Finance Minister Zhu Guangyao said at a recent press briefing.

The minister did not say when the new cap would become effective. But he added that, after three years at 51%, the cap would be lifted entirely.

The move, announced by Zhu following U.S. President Donald Trump’s visit to Beijing, is seen as a renewed effort to open up China’s domestic financial market.

Sixteen years after China agreed to liberalize foreign access to its financial sector as part of its World Trade Organization accession commitments, overseas investors still complain about barriers restraining their access to the world’s second-largest economy — barriers such as shareholding caps and license controls.

The new policies are set to address such concerns.

The new policy will allow foreign investors to control asset management joint ventures and thus have the final say in investment decisions, an executive of an American investment fund’s China operations told Caixin.

But questions remain on how far the new policy can go in removing barriers for foreign investors. Industry sources told Caixin that while the new policies scrap ownership restrictions on foreign firms, removal of “implicit barriers” to ensure fairness is more important.

“It has been proven over the past ten years that the ownership restrictions are not the biggest constraint for foreign firms to grow in China,” a manager at a foreign-funded bank said.

As part of the policy package, China will lift foreign ownership restrictions on local banks and asset management companies, which currently stand at 20% for a single investor and 25% for combined foreign shareholding. After three years, foreign investors will also be allowed to own up to 51% of shares in life insurance joint ventures. This cap will then be removed after five years, Zhu said.

There may be more to come. Caixin learned from various sources that regulators are also considering waiving the requirements on the size of foreign shareholders’ assets when investing in domestic banks, and on the minimum operating years before foreign-owned banks can apply to launch yuan-dominated deposit and loan businesses. Authorities are also mulling the removal of a rule that says at least one of the Chinese shareholders of a joint-venture securities firm should have a brokerage license.

Moving forward, regulators will no longer restrict securities businesses through licensing. Instead, when companies meet certain capital criteria, they will be allowed to launch underwriting, brokerage, asset management and other services, a person close to the securities regulator said.

The latest policies are designed to create a more level playing field for foreign firms in the financial sector, said another person close to the regulators. “The direction of the openness is to provide easier access and offer broader and deeper market involvement” to foreign players, the source said.

But the market is waiting to see when and how the new policies will be implemented.

Though foreign firms are applauding the proposed changes, they will remain cautious until it is clear how the rules will be implemented, said Gong Yaling, a partner at the MWE China Law Offices in Shanghai.

Putting the new policies into practice will require intensive revision of existing laws and regulations, and “will be a time-consuming project,” said Ge Yin, a lawyer at Clifford Chance’s Shanghai office.

“We won’t make any move immediately, but will decide after all the regulations are in place,” a U.S. investment fund executive said.

Some experts are concerned that even with the new policies in place, “implicit barriers” will remain. For instance, current regulations set the same requirements on domestic and foreign shareholders of Chinese banks. But in practice, foreign investors have faced stricter scrutiny than domestic rivals when investing in the banking sector.

“Simply raising the ownership limits is meaningless,” one person close to the regulators said. To truly open the market, “the ‘glass door’ needs to be broken.”

Foreign financial institutions have been venturing into China’s financial market since early 2000s, seeking access to the country’s massive household wealth. Chinese authorities promised to gradually open the market within five years after the country joined the WTO in 2001.

However, foreign investor presence in the Chinese market has slowed since the late 2000s, due partly to lower-than-expected market access and increasingly aggressive competition from domestic rivals. After the financial crisis in 2008, Western investors started to withdraw from their Chinese joint ventures. For example, New York-based Citigroup Inc. in February 2016 decided to sell its 20% stake in unlisted China Guangfa Bank to China Life Insurance Co.

Over the past decade, China’s banking sector has grown into the world’s largest in terms of assets, while the total value of stocks traded on the country’s bourses ranks second globally. But the opening up of the financial market has been slow, and lags behind most other countries, said Huang Yiping, deputy dean of Peking University’s National School of Development, in a recent released report about financial reform.

Concern over financial risk from mounting bad loans and excessive leverage has grown, and officials have increasingly counted on market liberalization to promote reform, invigorate competition and moderate risks.

Authorities have been gearing up efforts to further open the financial market. In January, the State Council issued a notice recommending greater access to the financial services market for foreign investors. Regulatory bodies in the securities, banking and insurance industries have since released measures to encourage foreign investment.

At a key annual financial-policies meeting in July, President Xi Jinping called for further opening of the financial sector to bring competition and sustainable growth.

In a recently published article, China's central bank chief, Zhou Xiaochuan, emphasized the role of reform and opening-up in securing financial stability and enhancing performance of the market and financial institutions. China must “take the initiative to prevent systemic risks by accelerating financial reform and opening up,” Zhou wrote.