Challenges Persist In First Half Year of Bond Connect 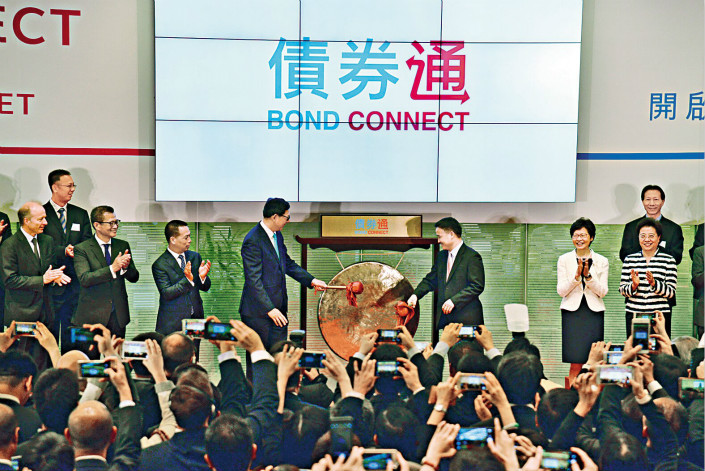 Offshore institutional investors are still not particularly keen about participating in the Bond Connect market-access program with Hong Kong. Above, the program officially launches in Hong Kong on July 3. Photo: Visual China

Interbank bonds held by offshore investors grew by 31% to 1.1 trillion yuan ($167 billion) from when the so-called Bond Connect program kicked off, on July 3, to the end of October. However, because the size of the bond market has also grown during the period, foreign holdings of those debts have remained steady at 1.7%.

Modeled on the stock-trading links known as Stock Connect, which went live in 2014, the Bond Connect program allows offshore investors to trade and settle through a Hong Kong-based custodian and clearing service. The plan was meant to rev up China’s massive $10 trillion yet illiquid bond market while lifting confidence in Chinese assets among overseas institutions.

But offshore institutional investors are still not particularly keen about participating in Bond Connect, likely because of inadequate tools to improve liquidity of interbank bonds, the limited eligible trading platforms and the low turnover of the interbank market, said industry executives and traders.

Yang Wenjie, head of yuan business at Bank of China (Hong Kong), said foreign investors have been put off by a lack of tools that help investors sell the bonds quickly without affecting prices. In addition, investors cannot currently use these bonds as collateral to borrow money. The program also doesn’t allow repurchase agreements, know as repos, that allow sellers to buy back the bonds in the future.

“Unless the institution has a strong demand in yuan-denominated assets, foreign investors in general won’t consider onshore bonds at the moment,” Yang said.

China has only 20 eligible counterparties in this over-the-counter interbank bond trading, which is very limited for some foreign institutions. Bonds also must go through both offshore e-trading platform Tradeweb as well as the onshore China Foreign Exchange Trade System, which are costlier than trading on just one terminal as many overseas institutions do, industry executives said.

The People’s Bank of China said in June that offshore trading platforms such as Bloomberg will be able to trade bonds under the connect program, but no progress has been made on the matter.

An inactive secondary market is another issue.

“There is insufficient liquidity of China’s interbank bond market because most bonds sold there are held to maturity,” said Xie Tong, China director of JPMorgan Chase’s Debt Market Department.

Some market participants believe investor confidence will improve after more international bond indexes include or increase their allocations of Chinese onshore bonds, though the lack of liquidity in the secondary market might delay the inclusion.