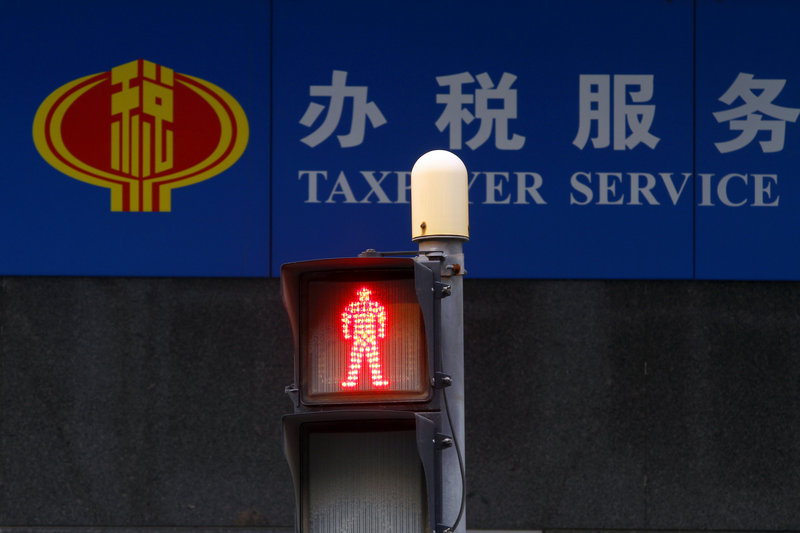 Foreign companies doing business in China have complained about high taxes as well as levies for local infrastructure and required contributions for welfare programs. Above: The taxation bureau of Hongkou District in Shanghai. Photo: CFP

China is offering foreign companies a tax break to encourage them to keep their earnings on the mainland, a step that follows a U.S. tax overhaul that aims to entice American firms to bring their overseas cash back home.

A 10% tax that China has slapped solely on foreign companies’ profits from equity investments will temporarily be waived if the earnings are plowed into government-targeted sectors, according to a statement issued Thursday by four central government ministries. These 348 pet sectors include mining, rail, environmental protection and elderly care.

The 25% standard corporate tax rate in China for both domestic and foreign companies wouldn’t be impacted.

The tax incentive comes in the wake of U.S. President Donald Trump signing a tax overhaul on Dec. 22 that, among other things, cuts the corporate tax rate to 21% from 35% and offers a one-time 15.5% tax rate on overseas cash brought home.

The tax exemption will be applied to foreign firms’ distributed profits, which refer to “dividends, bonuses and other equity investment income that derived from local enterprises,” said the statement.

Chinese authorities were prompted to act after the U.S. and other countries changed their tax rules to attract and keep foreign investments, said an official with knowledge of thinking in the Ministry of Finance.

The new U.S. tax rules could make China less attractive as an investment destination and potentially lead to capital outflows, analysts say. In addition to the newly sweetened tax deals back home, U.S. and other foreign businesses have long complained about other fees they are hit with in China, such as levies for local infrastructure and required contributions for welfare programs charged by local governments.

The tax exemption is retroactive from Jan. 1 of 2017, meaning qualifying companies could get a refund on taxes paid if they apply within a three-year window.

Foreign companies would not qualify if they make equity investments in affiliated entities, according to the statement published on the website of the Ministry of Finance.

China’s equity-earnings incentive is one of a number of measures to encourage foreign investment that were outlined in a policy document issued by the State Council – the cabinet – in August.

In an article published in October, China Finance Minister Xiao Jie wrote, “We will closely follow developments in tax reforms worldwide, prudently assess and identify trends in international tax regimes and further improve (China’s) corporate income taxation” as part of efforts to “beef up the international competitiveness of the country’s tax system.”

China’s top policy-makers, concluding a meeting on annual fiscal matters in Beijing on Thursday, pledged to continue efforts to reform the taxation system and reduce business costs over the next year. China reduced costs for corporates by 1 trillion yuan ($153 billion) in 2017 through tax and fee cuts, according to a statement by the gathering.