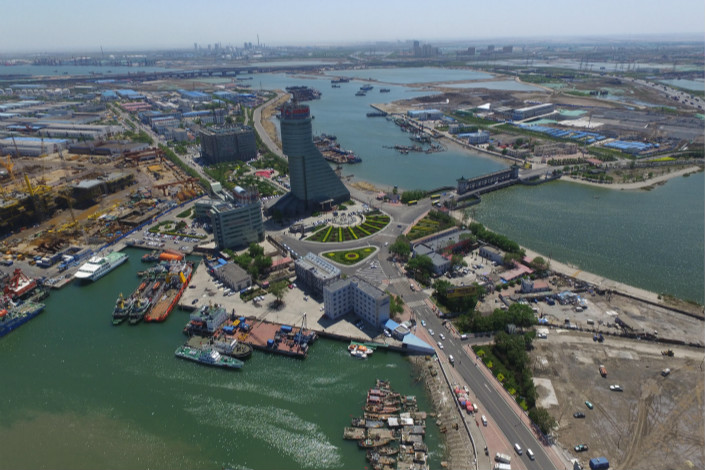 The growth in gross domestic product of Tianjin's Binhai New Area (above) in 2017 is now estimated to be about 6% — far lower than last year’s average national level of 6.9%, a figure that Premier Li Keqiang has suggested. Photo: Visual China

One year after the rust belt’s Liaoning province admitted cooking its economic statistics — the first Chinese regional government to make such an acknowledgment — a growing number of local governments have been rattled by the campaign against data inflation.

The latest example is the Binhai New Area, Tianjin’s special economic zone, which relies on modern manufacturing and logistics. The new area has revised its 2016 gross domestic product (GDP) down 33.5% to 665.4 billion yuan ($102.3 billion), according to a social media post that was published Thursday by local media outlet Tianjin Radio, which cited the latest review of the matter conducted by the city’s legislative and political advisory bodies.

In addition, according to the report, the GDP growth of the Binhai New Area in 2017 is estimated to be about 6% — far lower than last year’s average national level of 6.9%, a figure that Premier Li Keqiang suggested in a speech on Wednesday.

The drastic change in GDP growth is partly due to “different mathematics” being used, the social media post said. It explained that the new figure takes into account only the economic activity of companies that operate locally, instead of the activity of all the companies that are registered locally. It also said that the change was partly due to an effort to “wring out data inflation,” but didn’t detail how much eliminating inflation accounted for the cut. The post has since been deleted.

The local media outlet’s suggestion that some of Binhai’s GDP data were massaged upward came after similar moves taken by Liaoning province in January 2017 and the Inner Mongolia autonomous region last week. The cases are seen as part of the country’s campaign to delink GDP and government performance in order to implement the central government’s planned policy shift from high-speed growth to a more-balanced, environmentally friendly and high-quality development.

The Tianjin government has repeatedly mentioned its intent to stamp out data inflation, saying that it “jeopardizes the government’s credibility and executive ability” in a Dec. 27 editorial in the state-backed Tianjin Daily, which also suggested that local governments “show no hesitation” in their pursuit of real economic data.

The Binhai government previously announced that the total GDP of the area reached 1 trillion yuan in 2016, up 10.8% from the year before, which would have made it China’s first national-level economic zone to generate a trillion-yuan GDP, surpassing Shanghai’s Pudong New Area, which relies heavily on services and finance.

Tianjin, whose industrial production contributed more than 41% to its total GDP in 2016 according to a Chinese Local Government Blue Book compiled by Fitch Ratings, saw slower growth in the first three quarters of 2017 as it suffered a production reduction as environmental protection became a political priority.

Tianjin’s industrial output grew only 2.8% during the eleven-month period of 2017.

This story has been updated to correct a headline error. Tianjin’s special economic zone cut its 2016 GDP figure to $102.3 billion, not by $102.3 billion.