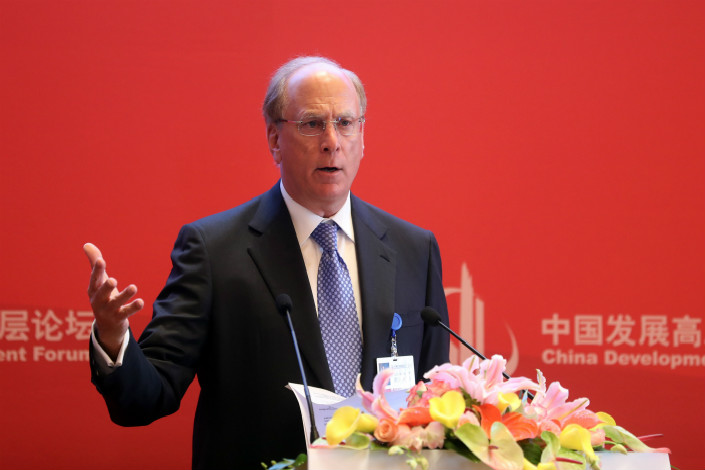 Larry Fink, founder and chairman of BlackRock Inc., the world’s largest money manager, indicated he expects foreign financial institutions will get the go-ahead in June to take controlling stakes in their Chinese joint ventures.

“We are excited about the opportunity that we expect in June whereby there will be more flexibility of having 51% ownership of an asset manager, then maybe possibly in three years 100% ownership,” Fink, who is also the company’s CEO, told Caixin in an interview on Sunday in Beijing, where he was attending the China Development Forum.

Chinese authorities pledged in November to remove long-standing constraints on overseas financial institutions’ ownership of their China ventures, although they did not give a time frame. The cap on direct or indirect foreign ownership of securities companies, fund management companies and futures companies will be raised to 51% from 49%, and all limits will be abolished three years after the rules come into force.

Liu He, a key economic adviser to President Xi Jinping who was appointed vice premier earlier in March, told the World Economic Forum in Davos in January that the changes will be implemented this year, although he also refrained from giving specific dates.

Although detailed rules have yet to be released, the U.K.’s Financial Times newspaper cited unnamed sources in a report on Monday as saying that Liu is pushing Chinese officials to finalize the regulations by May.

BlackRock, which has $6.29 trillion of assets under management, doesn’t have a joint venture in China, although in January it registered a wholly foreign-owned enterprise in Shanghai and has a license to sell onshore investment products to eligible institutions and high-net-worth investors in China.

BlackRock is the largest pension manager in Japan, Mexico, parts of Europe, and the U.S., Fink said, and he sees big opportunities for the company in China’s pensions market, though it would involve educating Chinese people about the benefits of long-term investing.

“We are excited about the opportunity to become really Chinese in China and helping the Chinese build towards their retirement,” he said. “So what we want to bring to China is the international information, market understanding, and our risk management tools … and in helping building a philosophy towards long-term investment,” he added.

“There’s not a culture of long-term investing in China. There’s a culture of home ownership and in most cases putting big pools of money in a bank account. I think that’s going to prove to be a mistake.”

As people live longer, they will need income to enjoy a dignified retirement. If they want to maintain their preretirement quality of life, they will need to start saving early and invest in high-quality stocks for the long term, rather than just jumping in and out of the market, Fink said.