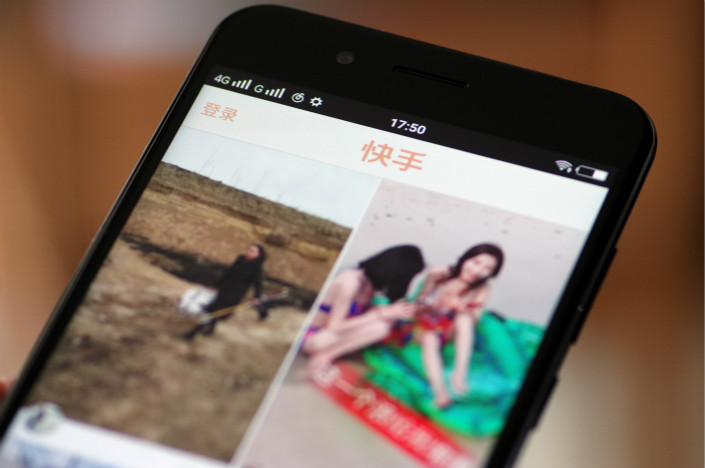 “I’m a 13-year-old mother-to-be. Older sisters with experience, please teach me how to give birth. I’m scared of pain,” one Kuaishou user featured in a TV expose wrote on her profile. Photo: IC

The head of one of China's most popular video platforms has apologized for allowing mothers allegedly as young as 13 to livestream broadcasts of their babies and daily lives after a state television program accused the company of promoting teenage pregnancy, triggering an outcry on social media.

Su Hua, chief executive of Tencent Holdings-backed Kuaishou, said users posting inappropriate content related to teenage pregnancy will have their accounts shut down. The company has also changed its algorithms so that they only recommend content that is “in keeping with the country’s laws and regulations, and with social norms.”

“Content has appeared on the platform that should not have been there, which has resulted in an extremely bad impact on society,” Su said in response to an investigation into livestreaming by teenage mothers in small towns and rural areas broadcast by China Central Television (CCTV) on Saturday. “We are very grateful for CCTV and other media outlets for their criticism of Kuaishou, which has caused us to clearly recognize our shortcomings.”

Su's apology was the second in as many days from Tencent-backed Kuaishou, which was one of several companies singled out by CCTV in its report that claimed content on their platforms was glorifying teenage pregnancy. The program said Kuaishou’s algorithms made it easy for subscribers to find the profiles of underage mothers.

Adolescent girls, some allegedly as young as 13 or 14, were shown posting videos of their daily lives as pregnant women or new mothers. The legal age for women to marry in China is 20 although having a child out of wedlock is not illegal. The age of consent in China is 14, meaning that many of the pregnant teens livestreaming on Kuaishou could be victims of statutory rape based on the ages they gave in their account profiles.

“I’m a 13-year-old mother-to-be. Older sisters with experience, please teach me how to give birth. I’m scared of pain,” one user exposed by CCTV wrote on her profile.

The users posted videos showing off their pregnancies, some of which received hundreds of thousands of views, the state broadcaster said. It criticized Kuaishou for not only failing to root out these accounts, but also for feeding them to other subscribers through their algorithms, causing a “very negative impact on young users.”

Kuaishou also came in for criticism on the social media platform Weibo, with one comment from someone with the username Wangyujizhe saying, “this has been going on for a long time, but you only know how to rectify the problem after being exposed by the media?”

Others, however, stressed that parents, rather than livestreaming platforms, should bear most of the responsibility for teenagers’ behavior.

Implementation of existing laws to protect minors also needs to be strengthened, Fang Yan, a senior partner at Beijing Jincheng Tongda Law Firm, wrote in an op-ed on Caixin's Chinese-language website on Tuesday. Fang, a delegate to the National People's Congress said she had long been concerned about the issue. “Admittedly, the innovative development of internet companies requires strong support from the country, but rules and regulations should not be lightly trampled on,” she wrote.

CCTV's expose of online videos and live broadcasts by teenage mothers comes amid a three-month crackdown by the Ministry of Culture on internet livestreaming which has mushroomed in the last three years as individuals use platforms as a way of making money.

There are now more than 100 video and livestreaming platforms and the number of users has jumped to more than 420 million, according to a February CCTV report. Revenue generated by such platforms surged to 30 billion yuan ($4.7 billion) in 2017 from just 7.4 billion yuan in 2014, it said.

But the government has struggled to regulate the booming industry, where changes in user behavior and technology frequently outpace legislation.

Other video platforms have previously been ordered to remove posts ranging from unauthorized foreign content and parodies to advertisements for counterfeit products.

Kuaishou was founded in 2011 and counts Tencent Holdings Ltd., the owner of the WeChat social media platform as an investor. The internet giant has led two rounds of funding for Kuaishou — one in March 2017 and in January this year — worth a total of $1.35 billion, according to earlier Caixin reports. Kuaishou is reportedly preparing for an initial public offering in Hong Kong.