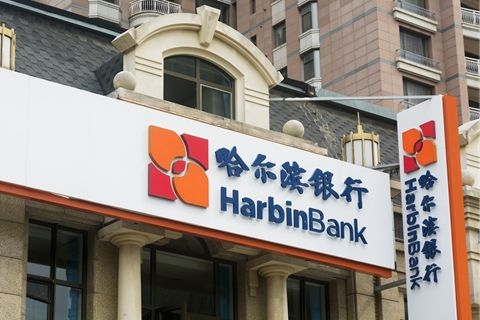 Harbin Bank is the first Chinese lender to announce its intention to sell perpetual bonds to replenish its capital. Photo: VCG

Harbin Bank Co., which recently abandoned plans to list its shares in China, has announced it wants to raise as much as 15 billion yuan ($2.39 billion) to replenish its capital by issuing perpetual bonds, after regulators last month allowed lenders to sell such instruments to bolster their balance sheets.

The city commercial bank, based in the capital of northeast Heilongjiang province, also plans to sell another 10 billion yuan of bonds to fund its lending business and repay maturing bonds, according to an announcement made to the Hong Kong stock exchange last week.

Harbin Bank is the first Chinese lender to announce its intention to sell perpetual bonds to increase what's known as Additional Tier 1 (AT1) capital since Chinese regulators gave the go-ahead in March when they issued new rules to expand the types of instruments banks could issue for that purpose.

Although many Chinese banks have issued perpetual bonds, which have no fixed maturity, they have not been able to do so specifically to replenish AT1 capital, which is made up of preferred shares and other types of capital instruments such as convertible bonds that are a ready source of funds that banks can use to absorb any losses they make. Until last month, Chinese banks were only allowed to issue preference shares.

Lenders are under growing pressure to raise capital to bolster their balance sheets. The government's campaign to bring about financial deleveraging and rein in financial risks has forced banks to bring risky back onto their balance sheets which has meant increasing provisions against bad debts. They have also had to write off soured loans and meet stricter regulations on capital adequacy. The new rules issued in March provide them with more options to raise funds.

Perpetual bonds do not require approval from the China Securities Regulatory Commission (CSRC), consequently it is faster and more convenient to issue them, said Wang Yifeng, director of the research institute for financial development at China Minsheng Banking Corp.

Preferred shares, the most common way for banks to raise additional Tier 1 capital, requires approval from the CSRC and a number of other regulators.

Perpetual bonds are attractive to institutional investors because they will get a steady stream of regular income well into the future. However, issuers will be able to redeem the bonds at a time of their choosing as specified in the prospectus and write the bonds off under specific conditions; for example, if their core capital adequacy ratios fall below a certain level. They can also change the rate of interest they pay on the bonds at fixed intervals.

These issues could cause problems for institutions who want to buy the bonds and put them into asset management products (AMP) to sell to their clients because of the sweeping new regulations issued in March to put the asset management industry under stricter scrutiny. One of the aims of the rules is to prevent a mismatch between the maturity of the AMPs and the underlying assets that support them, but the potential changes perpetual bond issuers can make to the terms of their bonds could make it tougher for asset managers to ensure their assets and liabilities match up.

In its announcement last month, the banking regulator said the authorities would formulate policies to allow institutions such as social security funds, insurance companies, brokerages, and fund companies to buy these new capital tools, but until those measures are released, potential investors will find themselves in a grey area.

Wang from Minsheng Bank said that Chinese regulations have not caught up with these new capital instruments, pointing out that current laws do not explicitly allow forced write-downs. How these bonds will fit in with the new asset management rules is also something that needs to be watched, he said.

Harbin Bank submitted plans for an initial public offering in Shanghai in 2015, but abandoned its bid in March after regulators raised questions about the identity of its shareholders. Caixin found that Tomorrow Holdings Group, a financial conglomerate whose founder, Xiao Jianhua, xis believed to be assisting mainland authorities with unspecified investigations, owned about 25.75% of the lender's shares through several related companies, exceeding the limit of 20% set by mainland regulators.