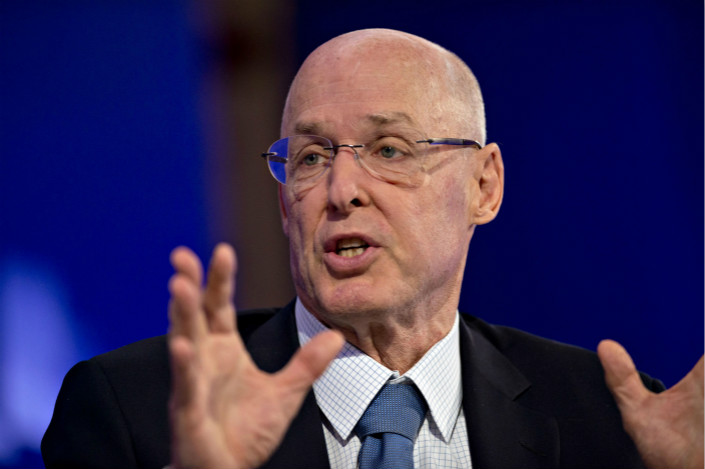 * Former U.S. Treasury Secretary Henry Paulson says market-opening reforms in China will be a win for both countries

(New York) — U.S. and China should avoid a mutually damaging trade war and negotiate the scope and pace of the latter country’s opening up, former U.S. Treasury Secretary Henry Paulson said on Thursday.

“We know a trade war is in no one’s interest,” Paulson said at the China Institute Executive Summit 2018 in New York. “Tariffs are not the biggest barriers to competition. The fundamental thing is opening up to foreign competition.”

Paulson’s remarks came as tension has eased from the $150 billion-tariff threat between the world’s two largest economies. This week, Chinese President Xi Jinping renewed a pledge to further open the country’s markets. On Thursday, U.S. President Donald Trump said the two countries may not end up levying any more tariffs on each other.

Paulson, who came back from a meeting with China’s policymakers in Beijing in March, said the Chinese are prepared to have some concrete market opening and structural reforms that “would be a win for both countries,” especially if they could move up the timeline a bit.

While some speakers at other panels of the China Institute conference are fatigued about Beijing’s promises, others shrugged off the trade turbulence between the two economies.

Because of the trade issue, the political climate between China and U.S. has been in constant flux, said Ni Pin, president of Wanxiang America Corp., at a separate panel. “That’s why we need leaders from the two sides to be smart enough to manage the situation.”

Among China’s new economic leadership, Yi Gang, the country’s first new central bank governor in 15 years, is also a U.S.-educated economist. Yi vowed this week at the annual Boao Forum that the country will open its financial sector to more foreign investment by the end of the year. It aims to allow foreign companies and their Chinese counterparts to compete on equal footing.

“We’ll see whether this country takes bold actions now that Xi Jinping has got his team in place to execute his agenda,” Paulson said. “He has got much greater ability to deliver and get things done that benefit both countries where there’s common interest.”

Paulson also pointed out that a negative trade balance is not “necessarily bad,” while U.S. economist and Nobel Prize winner Joseph Stiglitz said on Thursday at the same event that Trump’s fixation on trade deficit is “stupid.”