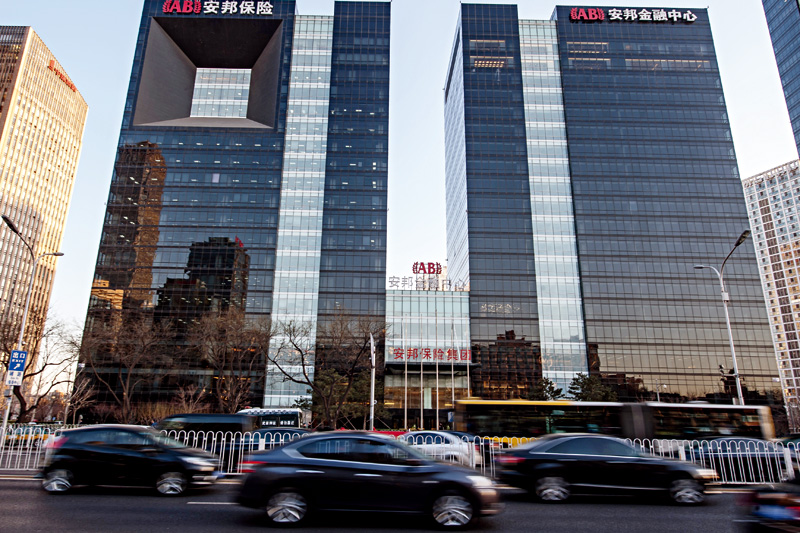 * Supervision pilot has been applied to different types of financial conglomerates, including Ant Financial

China’s financial regulators are drafting rules to put the country’s freewheeling financial conglomerates under stricter oversight in a bid to control risks created by the companies’ aggressive and often debt-fueled expansions.

Caixin learned from sources close to the regulators that the central bank has been pushing forward pilot regulations on several major financial holding companies since December to test new rules that may be applied industry-wide later this year.

Financial holding companies with sprawling businesses have mushroomed in China as investors from different industries — from real estate to internet — have been keen to invest in the financial industry to tap the massive market. Anbang Insurance Group, for example, was taken over last month by the national insurance regulator, which accused the conglomerate of violating laws and regulations, threatening its solvency.

Sizable conglomerates fueled policymakers’ concerns that they have used financial institutions to obtain loans that could threaten the overall financial system if they go bad. Meanwhile, financial holding companies often hide behind opaque shareholder structures and business webs that make it difficult to track their operations.

In an April conference in Washington, China’s central bank governor Yi Gang said fighting to reduce risks related to loosely regulated financial holding companies will be one of the major tasks of the central bank this year.

In March, the vice governor of the People’s Bank of China, Pan Gongsheng, confirmed that the central bank had been working with other regulatory departments to draft rules targeting financial holding companies.

The official close to the central bank said the ongoing supervision pilot has been applied to different types of financial conglomerates. Ant Financial Service Group, backed by e-commerce giant Alibaba Group Holding Ltd., is part of the pilot, the official said.

A number of de-facto financial holding companies have flourished in recent years. Major players include state-owned operations such as China Citic Group and China Everbright Group, while private businesses include Ping An Insurance, Anbang Insurance and Tomorrow Holding Group.

Their fast expansion has sparked regulators’ concerns as some companies have used their expansive businesses reach to skirt regulatory oversight, structure their products to avoid industry regulations, transfer money between businesses to fund acquisitions in other companies, and sell innovative new products that could pose risks to the stability of the financial system.

“Some non-financial institutions have been keen to invest in the financial industry, but they had no mechanism to isolate risks, were good at concealing risks and were constantly interfering in the operations of financial institutions,” said Jin Penghui, the head of the People’s Bank of China’s Shanghai branch, in March.

The rampant expansion of Anbang Insurance, which grew to be one of the country's biggest financial conglomerates in less than a decade, underscores the risks of lax oversight of such financial conglomerates. Anbang, which was closely held by founder Wu Xiaohui through a complicated and opaque shareholding structure, owns major stakes in several commercial banks. The capital to fund Anbang’s aggressive investments was mainly raised from retail investors through short-term, high-yield insurance policies known as universal life insurance, which became a target of regulatory crackdown last year.