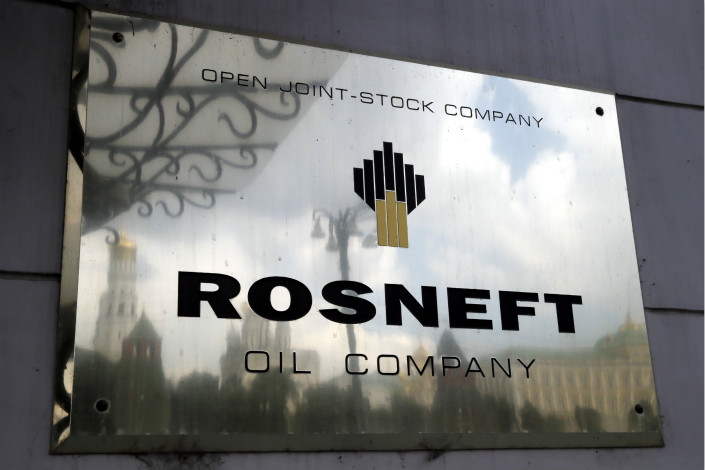 The logo of the Rosneft oil company on the wall of its headquarters in Moscow, Russia, in 2014. Photo: IC

(Reuters) — Rosneft Vietnam BV, a unit of Russian state oil firm Rosneft, is concerned that its recent drilling in an area of the South China Sea that is claimed by China could upset Beijing, two sources with direct knowledge of the situation told Reuters on Wednesday.

Rosneft said on Tuesday its Vietnamese unit had started drilling at the LD-3P well, part of the Lan Do “Red Orchid” offshore gas field in Block 06.1, 370 kilometers (230 miles) southeast of Vietnam. The block is “within the area outlined by China’s nine-dash line,” according to energy consultancy and research firm Wood Mackenzie.

When asked about the Reuters report of the drilling, a Chinese Foreign Ministry spokesman said that no country, organization, company or individual can, without the permission of the Chinese government, carry out oil and gas exploration or exploitation activities in waters under Chinese jurisdiction.

“We urge relevant parties to earnestly respect China’s sovereign and jurisdictional rights and not do anything that could impact bilateral relations or this region’s peace and stability,” the spokesman, Lu Kang, told a regular news briefing on Thursday.

Vietnam’s Foreign Ministry said its oil and gas activities are conducted in accordance with the 1982 U.N. Convention on the Law of the Sea.

“As we have repeatedly asserted, all of Vietnam’s maritime economic activities, including oil and gas activities, have been licensed and carried out in maritime zones entirely under Vietnamese sovereignty and jurisdiction,” ministry spokeswoman Le Thi Thu Hang said in a statement in response to a request from Reuters for comment.

China’s U-shaped “nine-dash line” marks a vast expanse of the South China Sea that it claims, including large swaths of Vietnam’s exclusive economic zone. Maps of the area indicate the block is around 85 kilometers inside the contested area.

A series of dashes, the line is not continuous, making China’s claims often ambiguous. In recent years, though, China has increasingly patrolled and enforced the area, claiming historic rights to the resources and features within it.

That block is licensed to Spanish energy firm Repsol, which has asked Vietnam to pay compensation over the issue.

Rosneft had no consultations with the Kremlin on drilling in the South China Sea, Kremlin spokesman Dmitry Peskov said on Thursday.

“As far as we know, the company has already made a statement that it works exactly in line with the obtained licenses,” Peskov told a regular conference call with reporters.

Fearing repercussions and pressure from China, Rosneft Vietnam had wanted to begin drilling with as little attention as possible, despite the statement by its parent company on Tuesday, the sources said.

On Thursday, its parent company said its drilling in the block was within Vietnam's territorial waters, and in accordance with Vietnamese legislation.

Both Rosneft and Russia’s Gazprom have significant development projects in Vietnamese waters that fall within the area claimed by China, said Ian Storey, a regional security expert at Singapore's ISEAS-Yusof Ishak Institute.

“Although Russian diplomats have privately expressed concerns to their U.S. counterparts that China may one day put pressure on Moscow to terminate those projects, so far Beijing has refrained from doing so because of the ever-closer strategic partnership between the two countries,” said Storey.

“It would be a serious blow to the burgeoning Sino-Russian entente if Beijing asked Moscow to end its energy projects in Vietnam.”

China has become Russia's top destination for exports, largely because Russia is the largest supplier of oil and gas to China, mainly through pipelines.

The drilling in the “Red Orchid” gas field within the block will be undertaken using the “Hakuryu-5” equipment made by Japanese company Japan Drilling Co. Ltd., Rosneft said in that statement.

The Hakuryu-5 arrived in the disputed area on May 6, according to Thomson Reuters Eikon ship-tracking data, and was still recorded as being inside the block late on Wednesday.

The drilling is significant for Vietnam, which has been struggling to maintain its crude oil and gas output amid already declining production from its key fields and the continuing pressure from China in the disputed waters.

Vietnam already gets about 30 percent of its gas needs from block 06.1 because of oil and gas operations that were first established there more than 15 years ago. The block is operated by Rosneft and jointly owned by India's ONGC , Rosneft, and PetroVietnam.

It lies just south of blocks 05.3 and 05.2, where in 2007 British Petroleum suspended work following a threat of “economic consequences” from China, according to a September, 2007 U.S. State Department cable leaked by WikiLeaks.

In April, Vietnam’s state oil firm PetroVietnam said that maritime tensions with China will hurt its offshore exploration and production activities this year.

Hanoi and Beijing have long been embroiled in disputes over the maritime boundary, which is a politically sensitive issue in Vietnam.

Police in the central province of Khanh Hoa have launched an investigation into a group of Chinese tourists who were pictured in a local airport wearing T-shirts printed with a map showing the “nine-dash line,” state media reported on Wednesday.

Airport authorities asked the tourists, who arrived at Cam Ranh Airport on Sunday, to take off their T-shirts after going through customs, the Van Hoa (Culture) newspaper reported.