By Li Rongde and Han Wei 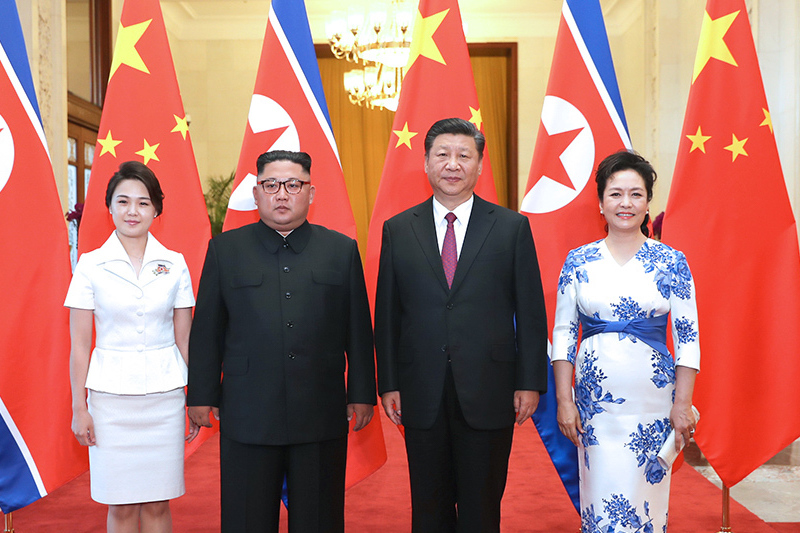 Xi Jinping (second from right) and his wife Peng Liyuan (right) meet with Kim Jong Un and his wife Ri Sol Ju at the Great Hall of the People in Beijing on June 19. Photo: Xinhua

Kim arrived at Beijing Tuesday for a two-day visit, his third to China in three months, one week after his historic summit with U.S. President Donald Trump in Singapore.

Kim’s meeting with Xi had been highly expected as many believed that he would come to Beijing to brief Xi on the June 12 meeting with Trump. In fact, speculation had swirled that Kim would head straight to China after concluding the summit with Trump.

Xi and Kim “had a candid and in-depth exchange of views on the current development of China-Democratic People’s Republic of Korea (DPRK) relations and the situation on the Korean Peninsula,” Xinhua reported, using North Korea’s official name.

Kim and his wife, Ri Sol Ju, were welcomed by Xi and his wife, Peng Liyuan, on Tuesday evening at the Great Hall of the People in central Beijing, Xinhua reported.

Xi praised the results of the Singapore summit and the consensus reached between Kim and Trump to achieve denuclearization and set up a peace mechanism on the Korea Peninsula, Xinhua reported.

Xi said Kim’s visit to China “reflected the importance of strategic communication between the two countries and the two parties,” according to Xinhua.

Kim said he was grateful for the support of Xi and China. The North Korean leader pledged to further strengthen the bilateral relationship and push forward the implementation of consensus reached during his talks with Xi.

China, a longtime backer of North Korea, with which it shares a long border, supplied Kim with chartered flights operated by its flagship carrier for his travel to Singapore.

China’s Foreign Ministry had announced Kim’s arrival in Beijing earlier Tuesday but provided no details of his schedule. The announcement was a major departure from the handling of other visits to China by the North Korean leader, as both Beijing and Pyongyang kept the trips under wraps until they were well underway.

Kim made a surprise visit in late March to Beijing in his first trip abroad in the six years of his rule. Then he met with Xi again in May in the northeastern city of Dalian.

Kim met Trump face to face for the first time in Singapore. The leaders issued a joint statement at the end of the one-day summit, agreeing to “build a lasting and stable peace regime on the Korean Peninsula.” They also agreed “to work toward the complete denuclearization of the Korean Peninsula,” according to the statement.

The meeting followed an abrupt thaw in relations between North Korea and the U.S., easing months of saber-rattling and war threats from both sides.

The outcome was welcomed by parties that included China and South Korea as a major step toward peace but criticized by many in the West as being too vague to be a win for Trump.