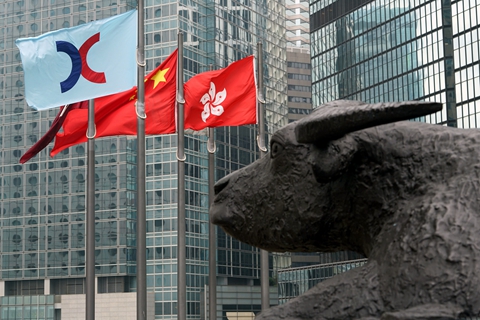 Hong Kong Exchanges and Clearing Ltd. in April allowed companies with weighted voting rights to list in a major change of its rules. Photo: VCG

The Hong Kong Stock Exchange operator decided to put off a debate on proposed rule changes that would allow corporate shareholders to retain shares with more voting rights — a broadening of its recent decision to permit “weighted voting rights” to company founders.

Hong Kong Exchanges and Clearing Ltd. (HKEx) said Wednesday that it will postpone discussion on whether to also allow companies to hold weighted voting rights because investors need more time to adapt to recent rule changes. The discussion was originally supposed to begin by July 31.

The HKEx didn’t say when the comment period will open.

The Hong Kong bourse in April revised its rules to allow companies with weighted voting rights, also known as dual-class shares, to list on the bourse as part of an effort to attract large tech companies.

The listing-rule change was made after nearly four years’ discussion as it marks an overhaul to Hong Kong’s “one share, one vote” principle. Some of the world’s largest and most influential tech companies, including Facebook Inc. and Google LLC parent Alphabet Corp., use dual-class share structures to maintain the influence of founders and management after they go public.

Chinese smartphone-maker Xiaomi Corp., which debuted in early July, is so far the only company with weighted voting rights to float in Hong Kong since the rule change.

However, the April revision limited ownership of shares with weighted voting rights to individual shareholders who are company founders. Such shares will lose their additional rights if they are transferred to other person under the rule.

The HKEx planned to launch a separate consultation on expanding weighted voting rights to corporate shareholders, which are usually designed to allow parent companies to maintain control of listed arms in spin-offs.

A spokesperson for the HKEx told Caixin that the market still lacks consensus on granting weighted voting rights to company shareholders, so the exchange believes the time is not right for having the discussion.

The suspended expansion also came after mainland bourses in Shanghai and Shenzhen decided to exclude stocks with different voting rights from the Stock Connect programs, through which mainland investors trade Hong Kong-listed stocks. The exchanges said the decision was made because many mainland investors lack a proper understanding of such arrangements and the risks involved.

The two bourses later agreed to work with the HKEx to put up a plan to allow mainland investors trading companies with weighted voting rights through the Stock Connect program after negotiations between HKEx and the mainland exchanges.