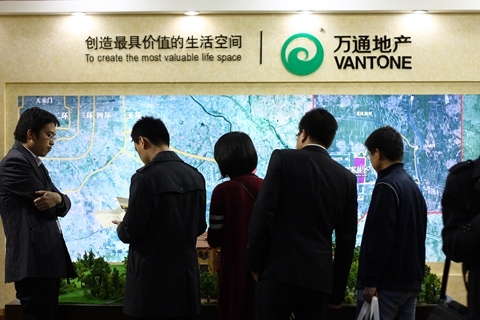 The booming electric-auto market has attracted several other Chinese real estate developers, including Evergrande Group, Baoneng Group and Country Garden. China is the world’s largest new-energy vehicle market, accounting for more than half of global electric-vehicle sales last year with the support of generous government subsidies.

By investing in the new-energy vehicle sector, developers can tap into a booming new market while paving the way to winning easier access to local land deals, said Song Sing, a real estate analyst at the China Development Institute. And acquiring an existing industry player is often a good start.

While such a business model is attractive to developers, the heated competition in the new-energy vehicle sector also makes acquisitions risky. Many of the companies springing up today are weak performers that are likely to be forced out of the market in a few years, said Fang Jianhua, president of a state-backed new-energy vehicle investment fund.

Established in 2003, Phylion Battery is the 10th-largest lithium-ion battery supplier in China in terms of installed capacity, according to market research provider EV Economy Institute. Phylion Battery accounts for about 1.7% of China’s market for batteries for electric commercial vehicles and light electric vehicles such as battery-powered bikes and scooters.

In 2017, Phylion Battery posted revenue of 1.44 billion yuan. Its 2017 profit nearly doubled from the previous year to 202 million yuan, according to a company financial report.

According to data from the China Association of Automobile Manufacturers, 777,000 new-energy vehicles were sold in China last year, up 53% from 2016. China has set a sales target of 7 million electric vehicles annually by 2025.

In the first half of this year, sales of new-energy vehicles in China doubled from a year earlier to 412,000, despite policy shifts to gradually phase out subsidies and incentives by 2020.

Baoneng, which initiated a high-profile hostile bid to take over China Vanke in 2016 that failed, is one of the most active real estate companies in the electric-car industry. Earlier this month, a company backed by Baoneng spent more than 300 million yuan for 5% of vehicle battery producer Shenzhen Zhaoxin New Energy Co. Ltd.