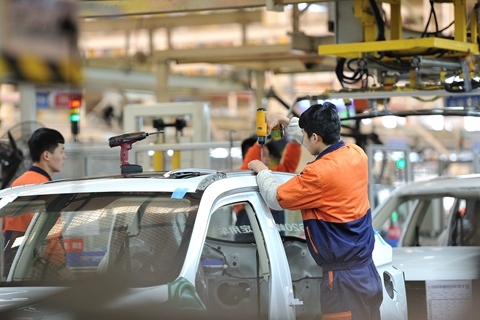 The pace of Chinese companies’ overseas mergers and acquisitions (M&As) continued to slow in the first six months of 2018 amid domestic scrutiny of corporate debts as well as rising foreign hurdles.

The number of Chinese overseas deals slid 18%, to 315, in the first half of this year from the same period a year ago, while the total value of the deals plunged 25% to $41.2 billion, according to a report that accounting firm PricewaterhouseCoopers (PwC) released on Tuesday.

China’s outbound M&A activity has declined for two straight years, after peaking in the first half of 2016 at 473 deals worth $141 billion. Companies have pulled back since the second half of that year, as domestic regulators tightened scrutiny of offshore investments due to concerns over mounting corporate debts and surging capital outflows. Chinese companies’ overseas investment value slumped 43.2% year-on-year in the second half of 2016.

The decline of Chinese overseas deals also reflects the growing sensitivity in the U.S. about Chinese investment in that country. In the first half of this year, Chinese M&As in the U.S. market totaled $6 billion, a sharp drop from $40 billion two years ago, according to the London-based PwC.

Chinese companies have become especially cautious about making deals in the U.S. as tensions between the two countries build up and rattle the M&A market, according to David Brown, transaction services leader of PwC China and Hong Kong.

Chinese takeovers in the U.S. have remained at a low level over the past 18 months, and as the trade war unfolds, big transactions and deals in sensitive areas will face regulatory risks, Brown said.

That followed a series of failed deals since last year that include a proposed Chinese takeover of U.S. microchip testing specialist Xcerra Corp. and the sale of U.S. high-tech chipmaker Lattice Semiconductor Corp. to a group of Chinese buyers led by private equity firm Canyon Bridge Capital Partners.

In January, Ant Financial Services Group, which is affiliated with Chinese e-commerce giant Alibaba Group Holding Ltd., scrapped a deal to buy U.S. money-transfer specialist MoneyGram International Inc. after failing to win approval from the CFIUS. A month later, the U.S. Securities and Exchange Commission blocked a Chinese buyer’s proposal to purchase the Chicago Stock Exchange by a Chinese buyer, killing a deal that had dragged on for nearly two years.

As deals in the U.S. slowed down, Europe became the primary destination for Chinese investment in term of value. In the first half, Chinese companies spent $25 billion, more than double that of the same period last year, on 85 deals in Europe, according to PwC.

The surge of value was boosted by two major deals — China Three Gorges Corp.’s $10.8 billion acquisition of one of Europe’s major electricity operators, EDP Energias de Portugal, and carmaker Geely’s $9 billion investment in Germany’s Daimler. Those two transactions accounted for nearly 80% of the total value of Chinese deals during the period.

In late July, the German government blocked a Chinese company’s acquisition of an advanced German machinery manufacturer due to concerns about surrendering key technology, the first deal Berlin has effectively vetoed.

Chris Chan, PwC China’s Financial Services M&A leader, said European regulators have stepped up scrutiny of Chinese acquisitions in sensitive sectors, although he expected Chinese buyers to remain active in the European market due to lower regulatory challenges than the U.S.

Chinese acquisition in Asia, its long-term primary market, declined 75% in term of value to $6 billion in the first half, PwC said.