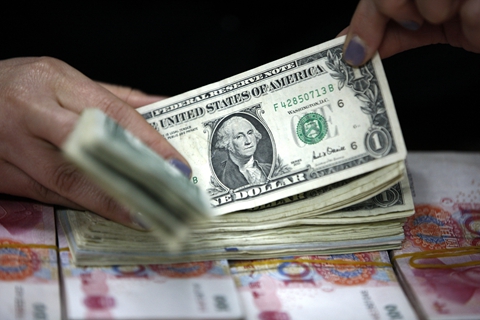 Chinese non-financial issuers sold a total of $2.9 billion of offshore bonds in July, the lowest monthly sales since August 2016 and less than one-fifth of the level in July 2017, data from Bloomberg showed.

The sharp drop came after Chinese companies rushed to sell bonds offshore since last year as domestic regulators’ deleveraging campaign drove up financing costs at home. Chinese offshore corporate bond sales reached as high as $17.3 billion in March but started to decline in the second quarter and went into a nosedive since June.

More than one-third of the offshore bond issuers in the second quarter were property developers, which have suffered narrowing access to financing in the domestic capital market due to regulatory controls to cool down the overheated sector. The decline in developers’ offshore bond sales was not as significant as for other sectors, but some issuers sold their bonds at a coupon rate of more than 10%, nearly double the average rate.

Several credit rating firms attributed the decline in offshore corporate bonds to tightening regulatory approvals for cross-border borrowing due to concerns about the build-up of companies’ overseas debt.

But bonds maturing in a year or less do not need approval by the NDRC, which has pushed many Chinese developers to sell short-term bonds in overseas markets since late May to bypass the offshore issuance quota.

In late June, the NDRC and the Ministry of Finance issued a joint notice highlighting risks of the overseas bond market and limiting the use of proceeds from offshore bonds sold by developers to repaying existing debt instead of investing in domestic property projects and replenishing working capital.

Lai added that the recent sharp depreciation of the yuan has increased Chinese issuers’ burden to repay dollar-denominated bonds.

Even though defaults on Chinese offshore corporate bonds are rare so far, a recent default by an oil and gas producer sparked fears of further defaults on offshore bonds.

China Energy Reserve missed repayment of three-year dollar bonds that matured May 11. Although the company paid interest to bondholders in following weeks, it announced a default on the $350 million principal on May 25 in a regulatory filing in Hong Kong, citing a “liquidity crunch.”

In a meeting last month, the State Council, China’s cabinet, pledged proactive fiscal policies that include boosting infrastructure investment and lending to companies.