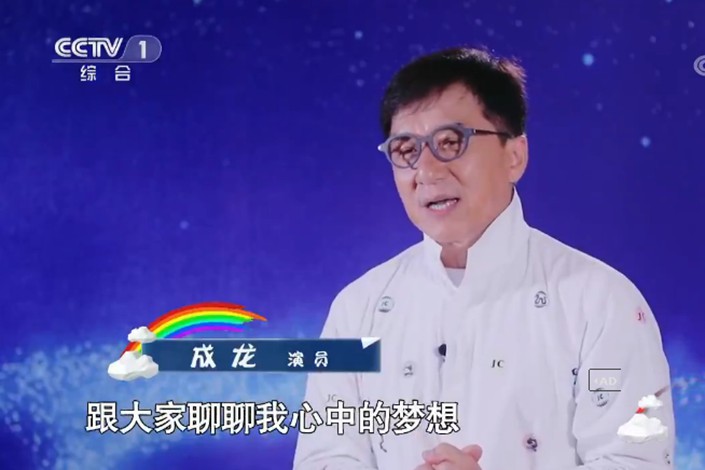 A screenshot of Hong Kong action star Jackie Chan talking about dreams during an educational television show that all primary and middle school students were required by the Ministry of Education to watch on Sept. 1. Photo: CCTV

On the first day of school, more than 100 million elementary and middle school kids across China were assigned identical homework: Watch an educational show co-produced by the Ministry of Education and state broadcaster CCTV. But the show itself has generated criticism for a format that some say is not educational and even counterproductive.

Sitting in front of their TVs at 8 p.m. Saturday, the broadcast time announced by the ministry, the students and their parents found themselves being forced to watch commercials for nearly a quarter of an hour before the beginning of the program, whose purpose was defined (link in Chinese) by the ministry as to “promote the spirit of science” and contribute to the “public welfare.”

The producers have since come under fire because the advertisements featured several extracurricular training centers that the ministry has vowed to strictly regulate. Concerns about the program also included the fact that it featured controversial celebrities, and the 104-minute format seemed to contradict Beijing’s plan to protect students’ vision.

As the nation’s top broadcaster, CCTV charges advertisers as much as 100,000 yuan ($14,600) for every five seconds of weekend evening prime time. Because viewing is mandatory for more than 100 million students across the country, the show, initiated in 2008, has been the most-watched program for years among shows aired at the same time. Some teachers have asked their students to submit photos of themselves watching the show and reflecting on it — even though some first-graders can’t yet read.

Advertisements touting private training centers drew fire for seeming to contradict the government’s goal, announced in February, to clean up the industry.

In China, the government guarantees all students nine years of free schooling before they go to high school or vocational college. Although the Education Ministry has pushed forward the “burden reduction” movement for decades, aiming at cutting academic assignments and developing practical skills, the student assessment system that focuses on exam scores has caused private training centers to boom.

The extracurricular centers provide reinforcing courses of all subjects, poach teachers from high-ranking schools, sponsor academic contests and even promise exclusive question banks that can help pass certain exams. Some of them, including TAL Education Group and Rise Education, are large enough to list in New York.

The industry has drawn fire because some centers focus solely on exams, which contradicts the “burden reduction” notion, and some operate without schooling qualification.

A day after the controversial show, CCTV apologized (link in Chinese) for “too many commercials before the show” that “has affected parents and students to watch it on time.” A spokesperson from the Education Ministry, Xu Mei, told Chinese media The Economic Observer Sunday that it was involved only in producing the show, and didn’t know much about other issues. The article was later taken down.

CCTV cares only about how much ad revenue it can generate, but not how to make education better, said (link in Chinese) Li Yinuo, who heads the China operations of the Bill & Melinda Gates Foundation and is co-founder of the Beijing-based international bilingual Etu School.

In 2008, the Education Ministry began requiring all elementary and middle school students to watch the CCTV program, whose Chinese name means “the first class when the new term opens.” The show is produced and broadcast at the beginning of school year with different patriotic themes, such as “the Chinese Dream,” proposed by President Xi Jinping, and commemorating the Red Army of the Communist Party of China.

This year, the event focused on “cultivating and practicing core socialist values, commemorating the 40th anniversary of the reform and opening-up and vigorously encouraging innovation and creativity.”

The show started with a speech by Hong Kong action star Jackie Chan, who talked about his career path and the power of dreams. But some parents complained that Chan is not a good father as his son was arrested and imprisoned on drug charges.

But it also invited several scientists, such as Wu Guanghui, chief designer of the C919, a large civil jet aircraft independently developed by China, and Xue Qikun, a Tsinghua University professor and a famous quantum physicist, who gave inspiring speeches.