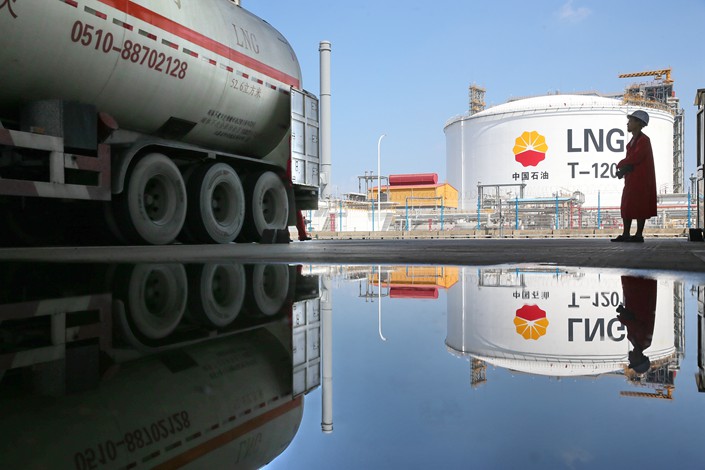 A tanker is prepared to be loaded with liquefied natural gas (LNG) at the Rudong LNG terminal of China National Petroleum Corp. in Rudong, Jiangsu province, on Tuesday. Photo: IC

The announcement came on the eve of the just-concluded Forum on China-Africa Cooperation summit in Beijing.

The state-owned CHEC will build the terminal, which will convert LNG into gas that’s ready for consumption, at the Tema port in southeastern Ghana, with construction expected to take 18 months and cost about $350 million, according to the Ghanaian president’s office website. When built, the terminal will process up to 2 million metric tons (2.2 U.S. tons) of natural gas a year and supply about 30% of Ghana’s total electricity generating capacity.

Ghanaian President Nana Akufo-Addo was present at the Sunday signing of the deal between CHEC and Tema LNG Terminal Co. Ltd., which is developing the port, Ghana’s biggest, on a build-operate-transfer basis. It was one of eight cooperation agreements signed between Beijing and Accra just ahead of the summit on Monday and Tuesday, including one to finalize a $2 billion deal under which state-owned Sinohydro Co. Ltd. will build infrastructure that includes roads, bridges and hospitals in exchange for an unspecified amount of Ghana’s refined bauxite.

While the Tema project is a private deal that will boost Ghana’s domestic energy supply rather than increasing that of China’s, it is one of several LNG projects Chinese companies are developing abroad, largely with the aim of increasing China’s supply. In July, China National Offshore Oil Corp. said it will invest an additional $3 billion in developing Nigeria’s offshore oil and gas reserves. In late 2017, Chinese companies signed major deals to develop energy reserves in the U.S. states of Alaska and West Virginia.

China has increased its LNG consumption substantially in recent years as it looks to reduce the environmental damage caused by its current heavy reliance on coal for power generation. Last year, LNG consumption rose by 46% to 38.13 million metric tons, allowing China to surge past South Korea to become the world’s second-largest LNG importer after Japan. The rise correlates with China’s increased consumption of gas (into which LNG transforms when warmed), which rose by 17.5% year-on-year in the first half of 2018 to 134.8 billion cubic meters (4.76 trillion cubic feet).

The Tema deal came just before the opening of two-day Forum for China-Africa Cooperation summit in Beijing, where Chinese President Xi Jinping promised $60 billion of financing for new projects on the continent. The figure matches China’s pledges made at the previous summit in Johannesburg three years ago, with details of new Chinese-backed energy projects likely to emerge in the next few days.