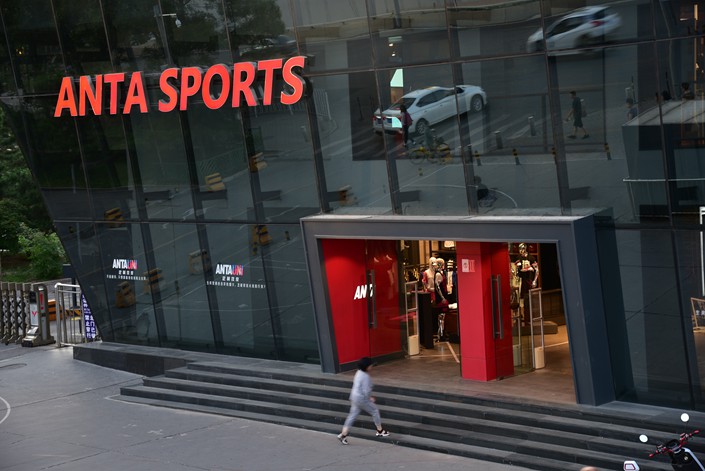 Sporting-apparel maker Anta Sports Products Ltd. is exploring a $5.5 billion bid for the European-based manufacturer of Wilson tennis rackets and Precor weight-lifting equipment in what could become the biggest overseas purchase of all time by a Chinese consumer-goods maker.

Anta and private equity firm FountainVest Partners have submitted a nonbinding preliminary indication of interest to Finland-based Amer Sports Corp., according to a stock exchange filing by Anta on Tuesday. The pair would offer 40 euros ($46.38) per share, which would value the deal at about 4.7 billion euros.

That could make the deal the largest-ever purchase of a foreign consumer goods manufacturer by a Chinese peer, said Zhu Danpeng, an analyst with the China Brand Research Institute.

The 40-euro price would represent a nearly 40% premium to Amer Sports’ stock price before news of the offer emerged. Since then, Amer Sports’ shares have surged about 17%, and were trading at 33.83 euros midway through the European trading day on Tuesday. But Anta’s shares moved in the opposite direction, as investors frowned on such a deal by bidding the stock down by 9.2% in Tuesday trade in Hong Kong.

Apart from the bid price and confirming its expression of interest, Anta did not provide any details on the strategic reasons for its bid. The company is one of China’s largest homegrown makers of sporting goods and apparel, and also operates a retail chain of stores. Its own market value of nearly HK$90 billion ($11.47 billion) is about twice the size of the total value of its joint bid with FountainVest.

Anta and many of China’s other brick-and-mortar retailers have gone through a period of adjustment over the last decade as they felt growing pressure from the nation’s growing e-commerce sector led by names like Alibaba Group Holding Ltd. and JD.com Inc. But following a period of retrenchment, including widespread store closures, many have returned to a growth track using a hybrid of traditional and online sales.

Anta, whose licensed brands for China include the Fila and NBA names, reported its revenue grew 25% last year to about 17 billion yuan ($2.5 billion), while its profit also rose 29% to 3.1 billion yuan, according to its latest annual report.

Chinese consumer companies have been particularly aggressive in their overseas purchases of food product companies, following a series of food safety scandals over the last decade. In one of the largest of those, WH Group Ltd. purchased leading U.S. pork products maker Smithfield for $4.7 billion in 2013. However, there have been fewer acquisitions in other consumer-goods sectors.