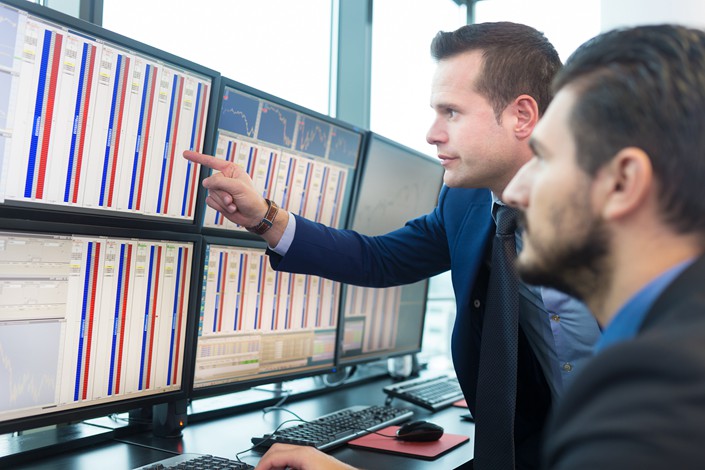 Expatriates who work in China and some foreigners who are employed overseas by an A-share listed company were finally allowed to apply to trade yuan-denominated A-shares on Monday. Photo: VCG

* Foreigners have shown little interest in the initiative due to lack of awareness, the complexity of the application process, and the dismal performance of the Chinese stock markets

(Beijing) — China’s benchmark equity index sank to its lowest level in almost four years on Monday, an unfortunate milestone for regulators as they opened the world’s third-largest stock market to foreigners working in the country.

The government has been gradually widening access to its stock, bond and commodity markets to foreign investors as part of a pledge to open its financial markets and attract more overseas capital. On Monday, under a program first announced in July, expatriates who work in China and some foreigners who are employed overseas by an A-share listed company were finally allowed to apply to trade yuan-denominated A-shares. In theory, they will be able to start trading as soon as Tuesday.

But the China Securities Regulatory Commission (CSRC) may have an uphill struggle to get the program off the ground. So far, foreigners have shown little interest in the initiative due to lack of awareness, the complexity of the application process, and the dismal performance of the Chinese stock markets, interviews with qualified employees and anecdotal evidence show. For their part, brokerages are also unenthusiastic, seeing limited potential for the business.

To qualify for the program, foreigners must be nationals of one of the 62 regions and countries that have formed stock supervision partnerships (link in Chinese) with the China Securities Regulatory Commission (CSRC), including the U.S., U.K., Australia, and Malaysia. They also need to provide a certificate of employment and a copy of their company’s registration in China. There are also trading limits on accounts set up by those who work for an A-share listed company but live abroad.

One further requirement is that the brokerage opening the account for the foreigner make an audio-visual recording of the process, a formality known in Chinese as “shuanglu,” to prove that investors have been made fully aware of the trading rules. Shuanglu is part of a broader campaign imposed on banks, brokerages and insurers to protect customers from being misled or lured into buying products that are not suitable for their respective risk profiles.

An Australian-Chinese marketing specialist who works for a foreign technology company in Shanghai said she’s considering opening an account, but one major obstacle for her is obtaining a copy of the company’s registration. Many foreign businesses operating in China don’t keep a copy readily available as their Chinese peers do.

Brokerages have so far shown little enthusiasm for the program due to the limited market.

Size matters, a manager who works at a Shanghai branch of Shenwan Hongyuan Securities Co. told Caixin. There are only 400,000 to 500,000 qualified expat applicants for the program nationwide, and the number likely to open an account under the initiative would be far lower, the manager said, citing internal calculations by his employer. That compares with the more than 140 million brokerage accounts opened by Chinese investors, data from the CSRC show.

Caixin has learned that three of the top securities firms in China sent guidelines on account opening to their branches only on Monday — a sign that they aren’t putting much effort into promoting the business. That’s in stark contrast to the industry’s enthusiasm in pushing new equity funds authorized to buy Chinese depositary receipts (CDRs) and unicorn stocks. Promotional literature and guidelines were sent to branches weeks before the funds were launched.

Fees and commissions earned on share trading, while still the bread-and-butter business of brokerages, no longer constitute a growing business with good potential, a manager in the refinancing department of one of the major securities firms told Caixin, which partly explains their lack of enthusiasm. Fee income as a percentage of total revenues has been declining over the past few years, while investment banking has become a more-profitable area of business, the manger said.

The roller-coaster ride of the Chinese stock markets may also be putting off foreign investors. Shanghai and Shenzhen, two of the world’s top 10 stock exchanges in terms of market capitalization, have been among the worst performers so far this year as investors worry about slowing economic growth and the impact of escalating trade tensions with the U.S.

The benchmark Shanghai Composite Index has slumped 19.8% so far this year, and analysts see little prospect of any sustained rebound.

Nevertheless, some foreigners see no harm in just opening an account, which will give them more options to invest their cash and diversify their investment portfolios.

They include Andrew Boreham, a columnist who works at a local newspaper in Shanghai and has been living in the country for three years. For Boreham, like most expats, earning more than the paltry returns from Chinese bank savings accounts meant either taking money out of China or entrusting cash to Chinese friends to buy wealth management products or money market funds.

“It’s always good to have more options to invest your money, especially as there are so few options open for foreigners living and working in China,” Boreham said.