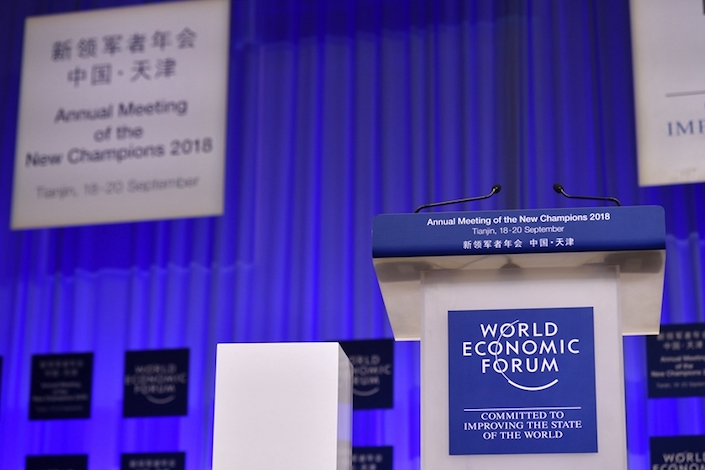 The stage is prepared for the World Economic Forum's "Summer Davos" conference in Tianjin on Tuesday. Photo: VCG

* BlackRock executive says trade-war-induced market volatility could prove to be an incentive, rather than a deterrence, to continued reform

(Tianjin) — Financial experts remain confident that China will not take its foot off the gas in its drive to liberalize its financial sector despite uncertainty and investor jitters over the escalating trade war with the U.S.

During the first day of the World Economic Forum’s “Summer Davos” conference in the port city of Tianjin on Tuesday, confidence remained high that China will not veer from its road map for financial reforms — even as the U.S. announced the same day that it plans to impose 10% tariffs on $200 billion worth of Chinese goods as of the following week.

“The opening of China’s markets in the last 18 months has been transformational and unprecedented,” said Mark Leung, CEO in China of JPMorgan Chase & Co., while speaking on a panel on the subject. In May, the financial-services firm applied to set up a majority-owned securities business in China, and Leung said he remains confident that this was on “due course” to being completed despite ongoing trade tensions.

He was referring to several steps and pronouncements of China’s commitment to allowing foreigners greater access to China’s financial markets, including President Xi Jinping’s keynote speech at the Boao Forum for Asia Annual Conference in Hainan in April. Since then, the government has undertaken reforms such as allowing foreign-funded banks to underwrite Chinese government bonds and appointing experienced technocrats to newly created senior regulatory roles.

Despite the moves, some observers have begun to question China’s commitment to reform as it tries to steady market jitters in the wake of the trade war. On Monday, the Shanghai Composite Index fell to its lowest level since 2014 before stocks posted their largest gains in three weeks the next day, despite the new tariff announcement.

Such market volatility could prove to be an incentive, rather than a deterrence, to reform, said Helen Zhu, the head of China Equities for the Fundamental Equity division of investment fund BlackRock Inc.

“It’s not a surprise that sentiment will be affected by trade uncertainty, and in capital markets, particularly in China’s retail-dominated A-share market (composed of individuals buyers rather than organizations), which tends to overshoot on both on pessimistic and optimistic sides,” Zhu said. On the other hand, “foreign institutional investors have a longer time horizon than domestic retail investors and are willing to enter the market despite short-term poor confidence.”

Liu Shijin, vice chairman of the China Development Research Foundation, a government-sponsored think tank, also called attention to the long-term perspective on reform and how it addresses fundamental issues in China’s economy. Xi’s speech at the Boao conference “was highly regarded in the international community as a major milestone event,” he said.

“The opening needs to solve glaring issues in the system such as there is not enough efficiency, not enough market access, and not enough competition. If we want to transform and upgrade our economy and want technologically innovative companies, opening up can help us to succeed in these,” he said.

The three-day Annual Meeting of the New Champions, as the conference is officially known, will wrap up on Thursday.