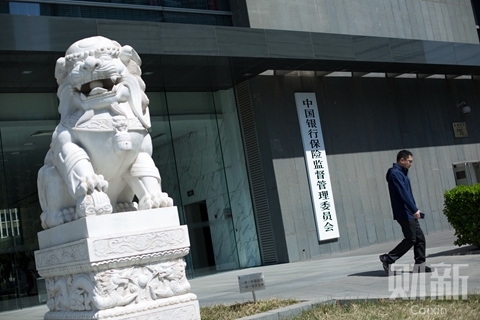 In the face of slowing growth and an escalating trade war that have spurred a shift toward more pro-growth policies, regulators are paying close attention to changes in China’s total outstanding social financing without loosening strict supervision, said Xiao Yuanqi, China Banking and Insurance Regulatory Commission’s (CBIRC) spokesperson, at a press conference Friday.

“We will not relax our efforts to ensure that financial risks are effectively controlled and maintain financial stability, while maintaining financial support for the real economy at the same time,” Xiao said.

Crackdowns would focus on off-balance sheet financing through the channeling business, he said. In channeling, banks, companies and high-net-worth individuals invest customer deposits or their own cash in high-yield products via “channels” — which are usually nonbank vehicles such as trusts — to achieve higher returns.

Nearly 80% of the decline in trust loans so far this year has been in the channeling business, but non-channeling trust loans increased in line with regulators’ goal, Xiao said.

The growth in total social financing rose slightly in July and August, but much of the credit growth came from a sharp rise in banks’ short-term bill financing, showing that banks are still reluctant to extend loans to businesses.

Adding to signs of fading credit confidence, an increase in formal bank lending has barely compensated for shrinking off-balance sheet shadow loans, which have been an important source of funds for cash-starved private companies because they cannot obtain financing through regular bank loans or bonds.

Combined trust loans, entrusted loans and undiscounted bankers' acceptances, which are common forms of shadow banking finance, fell by 267.4 billion yuan in August from a year earlier, following a slide of 1.75 trillion yuan in the first seven months, data from the central bank showed.

In recent months, with U.S. tariffs threatening to add pressure on China’s already slowing growth, the government has been ramping up infrastructure spending and loosening monetary policy.

In July, China’s central bank injected 502 billion yuan ($73.9 billion) of cash into the banking system through loans to commercial banks, a move to encourage banks to increase lending to small companies and invest in corporate bonds.