Tencent Tumbles Out of World’s Top 10 Most Valuable Companies 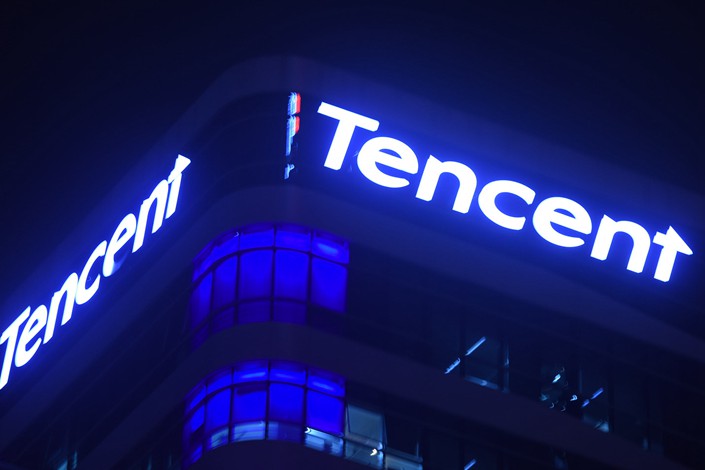 The Tencent logo on a building in Hangzhou, Zhejiang province. Photo: VCG

Less than two years after becoming one of the world’s 10 most valuable publicly traded companies, social networking giant Tencent Holdings Ltd. has passed a less flattering milestone by crashing out of the same elite club.

Tencent’s departure from the global top 10 came as the company posted a 10th consecutive day of share price declines, including a large drop on Thursday amid a broader market sell-off that saw China’s two main stock markets plunge by around 6%. That sell-off alone has seen Tencent’s shares fall by nearly 20% over that period, wiping out about $80 billion in market value.

Those declines pushed Tencent’s market cap down to about $320 billion on Thursday, making it the world’s 11th most valuable company, according to Bloomberg data compiled by Caixin. The company was replaced at the No. 10 position by U.S. energy Exxon Mobil Corp., with a market value of about $366 billion, and drug giant Johnson & Johnson at No. 9 with a value of $373 billion.

With Tencent’s departure, the only remaining Chinese company in the global top 10 was internet rival and e-commerce giant Alibaba Group Holding Ltd., which was No. 8 with a value of $381 billion.

“This is more of a sentiment trade towards China, the economy slowing down and that kind of thing,” said a China internet analyst of Tencent’s fall, speaking on condition his name not be used because of company rules. “It is literally in every single portfolio that has China in the name of it because it’s so ubiquitous in the internet landscape, to the extent that it’s been very widely held and there’s been a significant downturn in sentiment for China. That’s got to be what we’re seeing here today.”

Tencent made headlines in April 2017 when it first entered the global top 10, becoming the first Chinese internet company to earn such a distinction. It was followed shortly after that into the top 10 by Alibaba, as the pair emerged as China’s dominant internet companies.

But Tencent has suffered this year amid a national clampdown on its core online games business. China initiated an informal freeze on new game approvals in March, following a major government reshuffle, and has not resumed approvals since then. Partly as a result of that, Tencent reported its first quarterly profit drop in more than a decade in its last reporting quarter.

Including the Thursday decline, the company’s shares have lost nearly 42% of their value from a peak in late January.

But the big correction may be overblown, according to the analyst.

“Taking a longer term view, I think the sell-off doesn’t make much sense, the reason being the ubiquitous presence of where they are in payments, messaging, entertainment and retail, everything. They’re all over the place,” he said. “Betting against Tencent is betting against modernization in the Chinese economy, because that’s what they’re trying to do from a technology standpoint. Over the longer term that’s not a safe bet.”