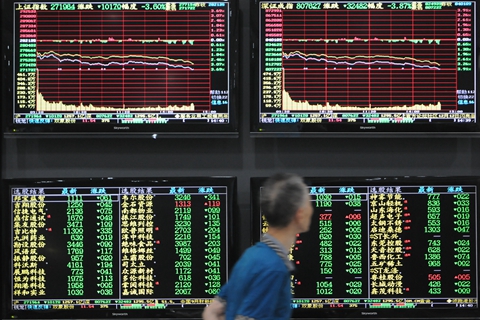 In the face of China’s stock-market slump, two Hong Kong exchange-traded funds (ETFs) that debuted a year ago are posting growth, reflecting increased holdings of Chinese stocks in foreign portfolios and the funds’ unconventional investment strategies.

The two major mainland bourses tumbled to near four-year lows Thursday, recording their biggest daily declines in 2½ years. While this week’s volatility is part of a global pullback, the two main Chinese benchmarks have struggled in bear territory this year on concerns about China’s slowing economic growth and the worsening trade war with the U.S.

Smart beta ETFs allocate assets based on factors such as volatility, dividends and other “anomalies.” Pure beta strategies do not capture such factors and instead passively follow indexes built on market capitalization and share prices.

In China’s A-share stock market, products with smart beta elements account for less than 0.2% of all ETFs. The uptake of these strategies has been slow in China, partly because passive investing is less popular than active investing, especially among retail customers who are after short-term gains.

China’s first smart beta product was the Jiashi Fundamentals 50, a listed open fund that started trading on the Shenzhen stock exchange in 2009. Factor drivers for the fund, co-developed by China Securities Index Co. Ltd. and Rayliant Global Advisors, are sales, cash flow, net assets and dividends. The fund’s assets declined 16% to 1.6 billion yuan during past year.

The Premia CSI Caixin China Bedrock Economy ETF, with assets of 456 million yuan as of Oct.10, or less than a third the size of the Jiashi fund, focuses on companies leading China’s mainstream economy. The Premia CSI Caixin China New Economy ETF, with 406 million yuan of assets, tracks listed new-economy companies based on nonfixed assets and growth characteristics.

In the U.S., about $1 in every $4 flowing into ETFs this year has gone to smart-beta strategies, boosting assets to 22% of the overall U.S. ETF market, according to Bloomberg.