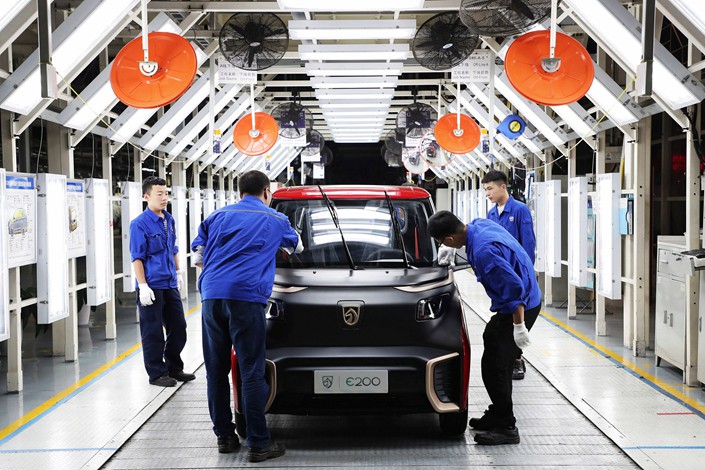 Workers at SAIC-GM-Wuling Automobile conduct a final inspection of a new energy vehicle at the joint venture’s Qingdao factory on Sept. 28. Photo: VCG

Shares of Chinese carmakers that rely heavily on foreign joint ventures dropped sharply on Monday, following signs that such firms may soon lose control of those ventures under relaxing ownership rules from Beijing.

A third consecutive month of falling car sales in China in September, combined with broader market weakness, further stoked the sell-off, which saw shares of many of the nation’s best-known names slump as much as 7%.

On Thursday, German carmaker BMW AG announced it will raise its stake in its joint venture with Brilliance China Automotive Holdings Ltd. to 75%, leaving its Chinese partner with just 25% of their current 50-50 partnership. China had previously capped foreigner ownership of all carmaking joint ventures at 50%, but will now phase out that limit over the next four years under new rules.

Brilliance shares tumbled 27% on Friday, the day after the announcement, and slumped another 6.2% on Monday as investors worried about the loss of its main income source.

“The plan is credit negative for Chinese automakers that have joint ventures with foreign automakers because it highlights the potential for the Chinese partners’ ownership stakes, and their share of these ventures’ sales and profits, to decline,” Moody’s wrote in a note on Monday. “Chinese automakers derive a significant portion of their sales and profits from these joint ventures, particularly those manufacturing passenger vehicles.”

The companies were also hurt by a broader sell-off that saw markets in China and Hong Kong drop about 1.5%. The decline took China’s two main bourses to levels not seen in more than four years, making them two of the world’s worst performers this year.

Sentiment was also hurt by industry data published on Friday showing that car sales in China dropped 11.6% in September, the third consecutive month of declines. That prompted some analysts to forecast the market could contract for the first time in more than 30 years.

One of the few carmakers to post a small gain was BYD Co. Ltd., which has no carmaking joint venture partners and has bet strongly on new-energy vehicles that are being strongly promoted by Beijing. Shares of BYD, which is backed by billionaire investor Warren Buffett, gained 0.1% in Hong Kong, and rose 1.1% in Shenzhen.