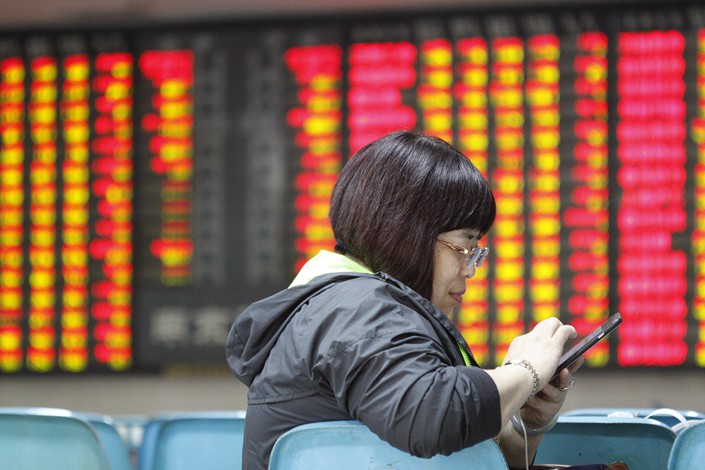 The wheels suddenly fell off the Chinese depositary reciept cart in June when smartphone-maker Xiaomi Corp. shelved its listing plan due to a dispute with the regulator over its valuation. Photo: VCG

*After the Chinese depositary receipts program stalled in June, the money investors placed in the six funds set up to buy the receipts was then invested in safe bets such as bonds and interbank instruments

*These six funds have since seen returns of around 1%, meanwhile China’s stock market has tanked, nearing a four-year low, and stocks in some tech companies mooted as potential participants in the receipts program have also fallen sharply

(Beijing) — The eagerly awaited Chinese depositary receipts (CDR) program to let domestic investors buy shares in overseas-listed tech giants stalled in June. But that's been a blessing in disguise for disappointed customers who poured money into six funds set up specifically to trade the securities.

With nothing to invest in, the funds parked most of the money they raised into high-grade, low-yield bonds as they waited for the program to take off. Since their official start date of July 5, three of the six funds have posted returns of 1% or more, according to data compiled by Shanghai Tiantian Fund Sales Co. Ltd., an internet portal that tracks domestic fund products. Over the same period the benchmark Shanghai Composite Index has dropped more than 9% and is hovering around a four-year low, while shares in Alibaba Group Holdings Ltd. sank 19% and Tencent Holdings Ltd. plummeted 26.5%.

“These funds were never intended to be 100% invested in CDRs, but even so, they have basically turned into low-yield bond funds,” said Han Zhengguo, an analyst with Founder Securities Co. Ltd., a Beijing-based brokerage firm. “We estimate they will produce an annualized return of 4% to 9%, and become an alternative to fixed-income funds.”

The CDR program was promoted by the China Securities Regulatory Commission earlier this year as a pilot modeled after the similarly named American depositary receipts. The aim was to give domestic investors exposure to some of the homegrown Chinese technology giants that trade in overseas markets, mostly the U.S. and Hong Kong, by allowing them to list on the mainland.

Regulators also authorized six equity funds to buy CDRs and listed unicorn companies that were also part of the program. Each fund was allowed to raise as much as 50 billion yuan ($7.2 billion), giving them a combined firepower of as much as 300 billion yuan, and were told to give individual investors priority. The funds were set up to be “strategic investors,” similar to cornerstone investors in initial public offerings, and were allowed by regulators to receive priority allocation of shares in return for agreeing to a lock-up period of three years.

However the wheels suddenly fell off the CDR cart in June when smartphone maker Xiaomi Corp. shelved its listing plan due to a dispute with the regulator over its valuation, while deteriorating market sentiment amid escalating trade friction with the U.S. also led the authorities to drag their feet.

Even so, the six funds were still marketed to investors, and while they failed to raise their full allocation, as of July 31 they had a total of 105.5 billion yuan in their coffers, according to data compiled by Shanghai Tiantian Fund Sales.

With no sign that the CDR program would be revived anytime soon, the six funds allocated most of the money to safe bets such as bonds and interbank instruments, and even hired additional portfolio managers specializing in bonds, according to Han from Founder Securities.

The best performer has been China Southern, whose fund has notched up a return of 1.37% since its launch, while the worst has been Huitianfu, which showed a return of 0.88%, according to data from Shanghai Tiantan Fund Sales.

“This has been a good outcome for investors in CDR funds as they've been completely shielded from the market correction,” said Han. “If the CDR program had been rolled out as planned, the performance of the funds would have been worse than expected, especially with the long lock-up period, the high valuation of the shares and the tepid economic outlook.”

Four of the six funds appointed new managers who are specialized in fixed-income investments soon after the launch of their fund products. China Asset Management added one new manager for its CDR fund who has 11 years of experience in bond investing, while Huitianfu Fund Management assigned three more managers from its fixed-income investment department to its CDR fund, beefing it up to a four-man team.

“Given the continued uncertainty over the CDR program and the turbulence in the stock market, those funds are likely to keep their portfolio in low-risk assets for the rest of the year,” Haitong Securities Co. Ltd. analyst Feng Jiarui said. “It's the best way to protect investors' interests.”