By Peng Yanfeng and Timmy Shen 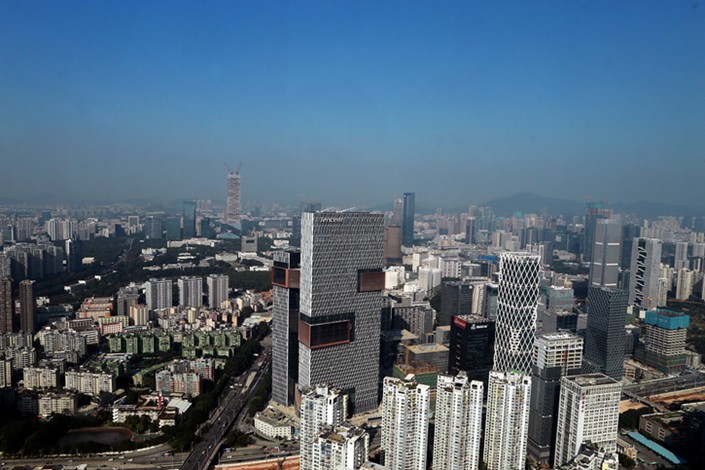 (Beijing) — A government investment arm in Shenzhen is slated on Monday to sell a bond to raise funds to bail out listed companies.

The move is part of an official campaign to defuse the share-dumping risk as the value of the securities pledged as collateral for loans plummets amid a stock market rout.

Shenzhen Investment Holdings, which is wholly owned by the State-owned Assets Supervision and Administration Commission of the South China boom town, will issue the bond to raise 1 billion yuan ($144 million), the company said in its prospectus (link in Chinese) filed with the Shenzhen Stock Exchange late Wednesday.

The proceeds from the bond issuance will be used to set up a special equity investment fund to help controllers of Shenzhen-based listed companies that are “operating healthily” to “deal with liquidity problems linked to pledged shares,” the statement said.

The decline has piled mounting stress on shareholders who pledged their holdings to take loans because falling prices trigger margin calls that compel borrowers to cough up more shares as collateral, and if they fail to do so or to repay their loans, brokerages may sell the pledged shares into the market, further depressing prices.

Such a vicious cycle could also destabilize the market, and the growing risk prompted China’s top financial officials, including Vice Premier Liu He, to release statements and specific measures on Friday to support the market and shore up investors’ confidence.

The stocks responded to the messages positively, with the benchmark Shanghai Composite Index posing its biggest gains in more than two years at Monday’s close. But the euphoria has since cooled, with Shanghai retreating to 2603.80 at close on Thursday.

The planned bond sale by Shenzhen Investment Holdings was “a specific measure taken by Shenzhen Stock Exchange to earnestly implement the requirements of Vice Premier Liu He on the healthy development of the stock market,” the bourse said in a statement. It was also “the first bailout special corporate bond” issued on the stock exchange, it added.

The bond has a duration of five years. Shenzhen Investment Holdings has the right to adjust the coupon rate at the end of the third year, and the bondholders may sell the bond back to the issuer after that — a flexible arrangement meant to increase the attractiveness of the product to investors.

The proposed coupon is set at a range of 3.6% to 4.6% during the book-building, with the final rate to be announced on Monday, when the sale of the bond starts, according to the company’s prospectus.

The issuance of the bond is part of a plan led by Shenzhen’s government to bail out listed companies based in the city. The local government prepares to inject at least 15 billion yuan into nearly 30 local listed companies, Caixin has learned earlier.

Founded in 2004, Shenzhen Investment Holdings had total assets of nearly 500 billion yuan at the end of June, according its prospectus. In the first half of this year, the firm earned a revenue of 23.3 billion yuan with net profit exceeding 5 billion yuan.

China’s brokerages have also put up plans to invest a combined 21 billion yuan in a collective asset-management program to help listed companies ease liquidity crunches amid the recent market rout. A total of 11 brokerages agreed to contribute to the program in the initial stage.

Other local governments, including Beijing and Shunde, a manufacturing hub in Guangdong in southern China, are also preparing capital support to ease liquidity crunches faced by listed companies.