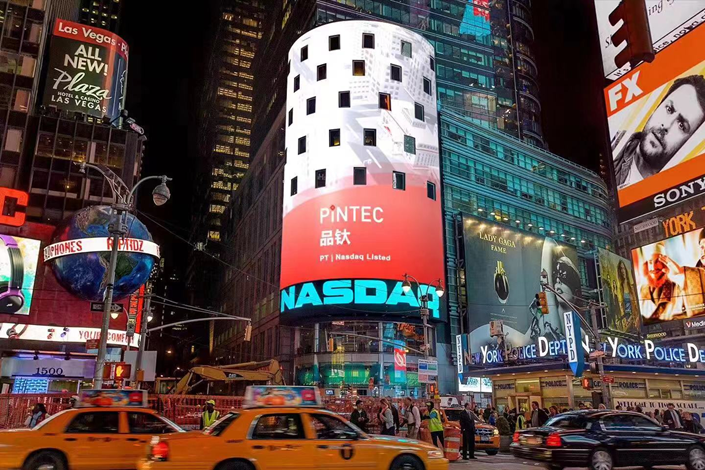 Chinese financial technology (fintech) company Pintec Technology Holdings Ltd. got a lucky break on Thursday as it made its debut on the Nasdaq Stock Market just as the index snapped a three-day losing streak.

Pintec, a technology platform that provides financial solutions for businesses and financial services companies, saw its American depositary shares rise as high as $15.10 in early trading before closing at $12.49, up 5.1% from their offer price of $11.88 and outpacing the Nasdaq Composite Index’s 2.95% gain.

Beijing-based Pintec is the latest Chinese company to launch an initial public offering (IPO) in the U.S. despite a volatile market that has forced many to scale back the amount of money they raise from selling shares. Pintec was originally aiming to collect much as $70 million when it first filed its prospectus to the U.S. Securities and Exchange Commission (SEC) in July, but in the end took in only $44.3 million. Chinese news aggregator Qutoutiao Inc. and electric car-maker Nio Inc. also had to cut their fundraising targets.

Pintec’s first trading day was much more subdued than peer-to-peer (P2P) lender X Financial, which had a wild debut in New York in September. Its shares jumped 26% to close at $11.97, but a few days later were back at their IPO price of $9.50 and have now dropped below their offer price, closing at $8.51 on Thursday.

Chinese fintech firms, which use the internet to offer financial products and services such as microlending, insurance and P2P lending, have been hibernating over the past year after the government issued a wave of regulations to rein in risky behavior, creating uncertainty in the market that in turn soured investor sentiment.

But the thaw may now be underway. Fintech firms, including online lending platform Smyfinancial, have been lining up for offshore listings since summer. Shenzhen-based Smyfinancial, whose company name is Samoyed Holding Ltd., filed a preliminary prospectus with the SEC on Sept. 28 and said it plans to raise up to $80 million.

Pintec, which was spun out from P2P lender Jimu Holdings Ltd. in 2016, operates a technology platform that enables financial services between financial companies and businesses that sell products and services to end users. It provides solutions for services that include point-of-sale financing, personal and business installment loans, wealth management, and insurance.

The proceeds of the IPO will be used for general corporate purposes, which may include investment in product development, sales and marketing activities, technology infrastructure, capital expenditures, and other general and administrative matters, according to the prospectus.

Pintec said listing on the Nasdaq will also help increase the value of its brand and help the company become more mature, which will contribute to gaining the trust of institutions and establishing partnerships with them.

“Pintec is very different from most of the Chinese fintech companies that have come to market in the U.S. previously,” the company said in an email. “According to (global consultancy) Oliver Wyman, we are one of only four major consumer finance enablement platforms, which have diversified partnership and tailored offerings ranging from stand-alone to end-to-end integrated solutions.”