How Will Brazil’s New Far-Right President Deal With China?

By Ke Dawei and Ren Qiuyu 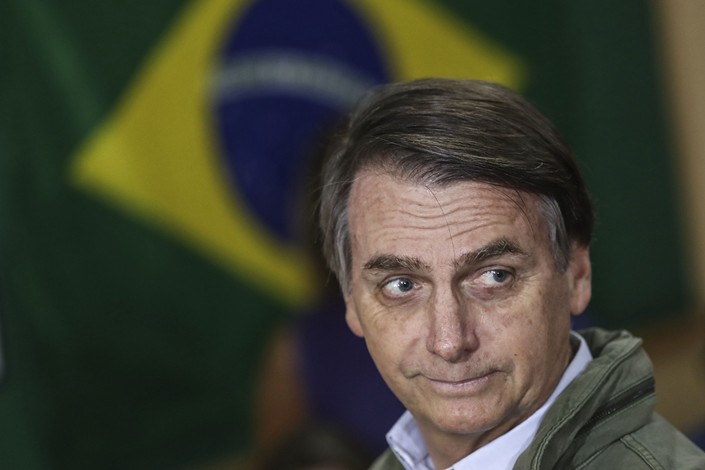 * The president-elect has long been an advocate of a strong state presence in strategic industries, which could spell trouble for Chinese investment

* Bolsonaro’s campaign rhetoric indicates that he might not uphold an agreement to support the multilateral global trade system, such as the one signed by the leaders of the five BRICS countries last year

(Beijing) — Jair Bolsonaro’s victory in Brazil’s presidential elections on Sunday sent political tremors across the world as the climate-change doubting, authoritarianism-admiring, self-professed “homophobe” moved from the fringe to center-stage of the world’s fourth-biggest democracy.

The victory of the far-right military veteran is likely to be viewed with some trepidation in Beijing, analysts told Caixin. Bolsonaro has been a vocal critic of China, accusing it of wanting to “buy Brazil," rather than “buy in Brazil.” This will worry Chinese investors in the country, particularly after Malaysia’s Mahathir Mohamad moved to cancel $22 billion-worth of planned Chinese projects after becoming the country’s prime minister in May.

Bolsonaro has also voiced his desire to withdraw from multilateral organizations and increase political ties with the “global north,” especially the United States, breaking from the policies of his predecessors. “Our way is different from what the previous government did, friendly and loyal to communist regimes,” he wrote in a tweet last March.

Caixin spoke to several analysts to explore what Bolsonaro’s victory means for China-Brazil relations and Chinese investment in the country. While major questions remain, the consensus view appeared to be that Bolsonaro the president will be more pragmatic and less provocative toward China than Bolsonaro the candidate.

China has long been a major source of investment in Brazil, pouring at least $63 billion into the country over the last five years, with almost half flowing into the country’s abundant energy sector, according to data from the American Enterprise Institute. Brazil is also China’s second biggest target of lending in South America, behind crisis-ridden Venezuela.

Yet the president-elect has been a long-time advocate of a strong state presence in strategic industries, which could spell trouble for the influx of Chinese investment that has accompanied the previous administration’s efforts to encourage the privatization of state-owned assets, said Jimena Blanco, head of Latin America at risk consultancy Verisk Maplecroft.

For example, state-owned behemoth China National Petroleum Corp. announced it was forming a joint venture with Brazilian state-owned peer Petroleo Brasileiro SA (Petrobras) just two weeks ago that would help to kickstart construction of the latter’s stalled $16 billion refinery near Rio de Janeiro. Deals with China could provide a “lifeline” to Petrobras, said Lucia Caamano, head of intelligence at AKE International, as the government looks to lighten the crippling debt burden of the company that played a prominent role in the corruption scandal that led to the impeachment of former president Dilma Rousseff.

Yet unanswered questions remain over how much Bolsonaro will countenance allowing China to play a role in critical infrastructure, analysts told Caixin, particularly as right-wing nationalism and a strong state presence have long been hallmarks of Bolsonaro’s pro-military faction. “Contract reviews or making life just a little more difficult for Chinese companies trying to get hold of mining or hydro or even oil interests could be part of Brazil’s new reality,” Caamano said.

“Bolsonaro’s basic tendency seems to be in line with that of the Brazilian military, which has always had a nationalist and state-led view of the economy and heavy industry in particular,” said Jill Hedges of Oxford Analytica. But “it isn’t very clear yet whether the finance minister or military advisers will have greater influence,” she added. Blanco agrees, while noting that investors will take it as a positive sign that Bolsonaro has taken on the pro-foreign investment Paulo Guedes as his main economic advisor.

Another bugbear for Bolsonaro has been Chinese efforts to gain a foothold in mining Brazil’s niobium, a metal used in the production of strong, heat-resistant superalloys, of which Brazil holds about 85% of the global supply, said Verisk Maplecroft’s Blanco. He was highly critical of the previous government’s decision to allow state-owned China Molybdenum Co. Ltd. to buy a niobium mine for $1.7 billion in 2016, which Bolsonaro argued would substantially boost the national economy if kept in Brazilian hands. No analyst mentioned the looming specter of nationalization, however.

Analysts largely agree that Bolsonaro is likely to be far more pragmatic once in office. There’s a possibility of a shift to seeking foreign domestic investment (FDI) from elsewhere, said Hedges. “However, such a shift might be limited by necessity in any case — Brazil has significant needs in terms of infrastructure investment, and that might not be forthcoming from ‘preferred’ sources, and its own state resources are under considerable strain,” she added, noting that Argentina’s president Mauricio Macri also said he would shift away from China without doing so in practice.

Bolsonaro will also have to manage the expectations of the farm lobby, one of his largest backers, members of which have benefited from increased trade with China in light of the U.S.-China trade war. Brazil’s soybean exports to China leapt 20% year-on year between January and August, according to Brazil’s agriculture ministry. The incoming president is unlikely to antagonize this base by taking action that threatens Brazil’s exports to China, Hedges reckons.

A potential flashpoint in relations is Bolsonaro’s previous support of Taiwan, which China views as a renegade province. While extending his congratulations at a daily press briefing on Monday, China’s foreign ministry spokesman Lu Kang reminded the president-elect that China’s international relations are based on the ‘One-China Principle,’ which prevents countries from establishing diplomatic ties with both Taiwan and China. This was perhaps a direct nod to Bolsonaro’s visit to Taiwan during the election campaign, becoming the first Brazilian presidential candidate to do so since Brazil established formal ties with the People’s Republic of China in the 1970s.

Many experts who spoke with Caixin agreed that Bolsonaro’s anti-China rhetoric could cause the political relationship to cool somewhat, especially if the president-elect follows through on promises to scale back Brazil’s involvement in multilaterals. China is looking to Brazil for support as a major player in the BRICS group of emerging economies, with Brazil set to host next year’s presidential summit. However, Bolsonaro’s campaign rhetoric does not indicate that he would uphold an agreement to support the multilateral global trade system, such as the one signed by the leaders of the five countries last year.

However, analysts also expect that the strength and depth of economic relations will ultimately prevail.

“These are ties that bind despite the political environment,” said Margaret Myers, director of the Asia and Latin America program at the Inter-American Dialogue. “Certainly, it can have an impact on bigger projects, that are government-backed or would have a political dimension. But the commercial and investment-related activity would continue.”

The Global Times, a nationalistic state-backed Chinese tabloid, maintained through multiple articles that ultimately Brazil would not turn its back on China. In an editorial, the outlet referred to Bolsonaro as “someone who does not really understand China” and emphasized that partnership with China is mutually beneficial.

Sun Shaolong of state-funded think tank Institute for Contemporary China and the World echoed a similar sentiment. “Bolsonaro is not Trump, and we must not overanalyze his election,” he wrote in an opinion piece on China News. “In the long run, China-Brazil relations will still have a stable foundation.”

Myers noted that China has no interest in losing Brazil as a strategic partner. “I don’t think they would give up in the case of Brazil either given the strength of the economic ties and the importance of Brazil as an anchor for Chinese engagement in the region,” she said.