By Hu Yue and Charlotte Yang 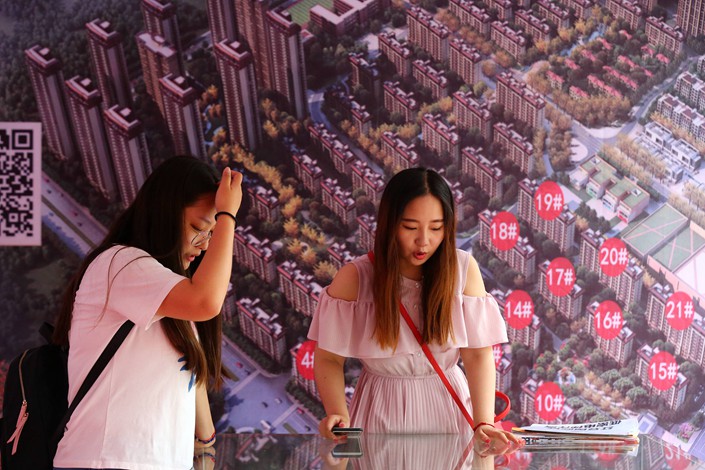 People look at models of houses at an exhibition in Huai'an, Jiangsu province on Oct. 7. Photo: VCG

China’s central bank has issued a warning about the abnormally high growth in the amount of short-term consumer loans issued in China last year.

The surge in consumer credit, which has been accompanied by a rapid buildup in household debt, has sparked wide concerns about growing default risks, as well as its potential to drag on China’s economic growth in the medium term, analysts have said.

Speaking at an economics forum last week, former central bank Governor Zhou Xiaochuan warned about the rapid growth in consumer credit and the consequences of encouraging young people to buy things with money they don’t have.

Year-on-year growth in outstanding short-term consumer loans surged from 19.9% in January 2017 to 40.9% in October 2017. Over the period, the growth rate for mid- and long-term consumer loans fell from around 35% to less than 25%, according to the central bank’s latest financial stability report (link in Chinese).

The use of short-term consumer credit on property investments also drove the increase, the central bank said. Since the second half of 2016, banks have gradually tightened restrictions on mortgages, so some buyers have used short-term consumer loans to cover their down payments, the report said.

The banking regulator has been trying to prevent consumer credit from being used to make speculative investments. In October, 13 financial institutions were fined a combined 10.4 million yuan ($1.5 million) for failing to track how borrowers spend their consumer loans.

The central bank also believes that regulators’ recent crackdown on online peer-to-peer (P2P) lending platforms has driven some demand for short-term consumer loans back to the banking system, which banks have welcomed because the business is more lucrative.