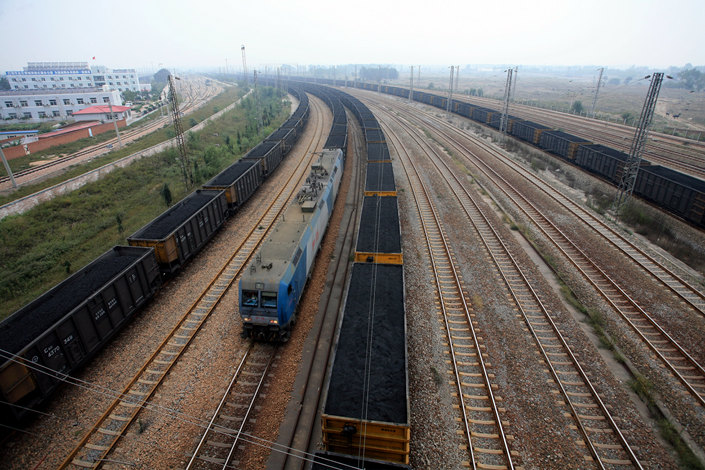 A China Railway Corp. (CRC) subsidiary is planning to launch a national coal trading center in the northern port of Qinhuangdao in a move likely to increase the reliability of supplies and move heavily-polluting transport off the roads, Caixin has learned.

This has been a boon to CRC, which, thanks largely to a push to reduce transport of coal, ore and steel by road in some northern Chinese regions, recorded its strongest ever performance in the first three quarters of this year. It registered a net loss of 27 million yuan ($3.89 million) in the period, a significant turnaround from a loss of 777.6 billion yuan in the same period in 2017.

The new trading center appears to be intended to rationalize both coal purchases and transportation across the country, analysts said. While a formal announcement is yet to be made, Caixin has learned that China Railway plans to have the platform operating by end of year.

The port of Qinhuangdao in China’s northern Hebei province is already a major hub for coal imports. It is home to some of China’s several existing coal trading and information services that provide a benchmark reference for domestic coal prices.

The current Qinhuangdao trading center, however, is limited in terms of transaction volume, and the tie-in with China Railway is intended to establish a nationwide coal trading center with more coordinated pricing and capacity allocation, an industry analyst said.

Ensuring adequate and efficient coal allocation has been a frequent challenge, with economic powerhouse provinces Guangdong and Shandong both warning of potential outages this summer when an unusually warm May increased the strain on the power grid from air-conditioning units.

There have also been problems with providers stockpiling coal to push up prices. The new national coal trading platform appears aimed at curbing both issues.

The coal trading center initiative is unlikely to lead to a major increase in China Railway Corp’s rail business, as it already has a major share of coal transportation due to restrictions on coal freight by road, said Zhao Jian, director of the China Urbanization Researcher Center at Beijing Jiaotong University.

“However, by launching such a platform, CRC may be entering an area where it has more say in the pricing than its customers, and it is unclear whether a state-owned company can be successful in managing such a market-oriented system,” he said.

Despite China’s long-term aim to reduce reliance on coal in the country’s energy mix, consumption last year increased for the first time since 2013, rendering premature any celebrations that China’s coal use had peaked.

Coal still accounted for around 60% of power generation in China in 2017 and with more plants on the way, according to a report by research coalition CoalSwarm, the coal trading center may raise fears that it will encourage further coal usage.

However, the new coal trading plan does not counter the structural decline in overall demand “at least on the surface,” said Lauri Myllyvira, a senior analyst with Greenpeace’s Global Air Pollution Unit.

“Rail shipment volumes can be maintained for quite some time as more coal production is centered in the west and more shipments move from road to rail,” she said. “Naturally it's important for such a plan to be calibrated against the targets of reducing reliance on coal, even if current sentiment is affected by the rebound in coal demand over the past two years.”

The shift to rail could “in theory play quite a significant role” in reducing pollution in urban areas, said Ma Jun, director of the Institute for Public & Environmental Affairs (IPE), a Beijing-based nongovernmental organization. While diesel-chugging heavy transport vehicles account for only around 5% of traffic on China’s roads, they are responsible for 50% to 80% of pollution from automobiles, he said.

“China has some terribly congested roads, causing pollution in the coal regions of Shaanxi, Hebei and Inner Mongolia, and there is substantial infrastructure damage due to overloading,” he said.

“The policy to convert road transportation to rail is very helpful, but this coal trading platform is going to play a neutral role environmentally overall,” he added.