In-Depth: China Puts Listed Companies on Notice — Stay Clean or Get Out 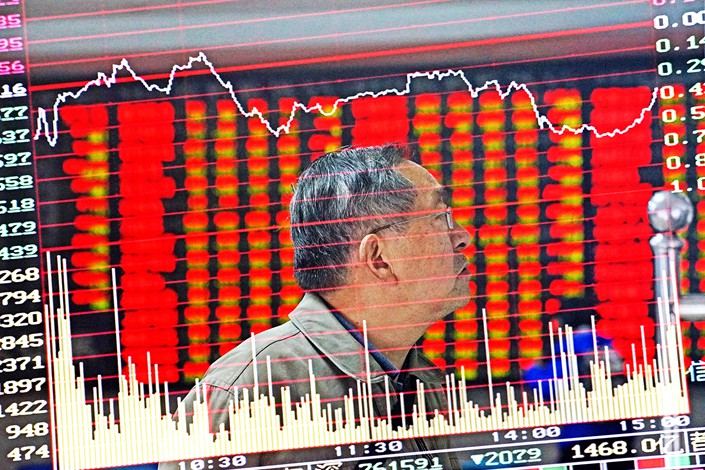 An investor in Nanjing, Jiangsu province, keeps a close eye on the stock market on Nov. 26. Photo: IC

The only thing harder than getting listed on China’s stock market is getting delisted. But that may be about to change.

New rules introduced in mid-November on mandatory delisting for companies that violate the law have put the markets on notice that illegal behavior will no longer be tolerated and will lead to the expulsion of firms found guilty of transgressions.

Regulators are getting tough following a series of scandals — notably vaccine-maker Changsheng Bio-Technology Co. Ltd. — that have rocked investors’ confidence in the integrity of listed companies. A new, potentially game-changing, registration-based system for initial public offerings (IPOs) to be implemented as part of a proposed technology and innovation board in Shanghai also underscores the need to increase scrutiny and punishment of unscrupulous listed firms.

The IPO reform announced by President Xi Jinping in early November will reduce regulators’ power to vet new entrants onto the stock market and put the onus of assessing companies onto investors, and financial advisers such as underwriters and investment banks. As a result, the flip side of the coin — delisting — also needs to be addressed. Delisting criteria and requirements are being strengthened in order to ensure unqualified firms are identified and removed from the stock market.

“The trial of the registration-based IPO system on the high-tech board provides a window of opportunity for promoting the delisting mechanism,” said a senior manager of a securities firm, who declined to be identified.

Slow to take off

“Only after barriers to smooth market entry and exit are both cleared can the capital market effectively play its role (in allocating resources),” he said. “The registration-based IPO system can hardly be successful without the installation of an effective delisting mechanism.”

Although China opened its stock markets in 1992, delisting rules were only introduced by the China Securities Regulatory Commission (CSRC) in 2001. Since then, just 52 companies have been kicked off the Shanghai and Shenzhen stock exchanges, of which 42 took place through 2007, according to data provider iFind, a tiny fraction of the more than 3,500 firms currently traded on the two bourses.

In contrast, more than 9,000 firms were delisted from U.S. stock markets from 1995 to 2005, almost half of which were involuntary, according to a 2008 study led by Jonathan Macey, a professor of corporate law at Yale University.

Chinese companies have used a variety of tricks to avoid being booted out of the market, such as falsifying their accounts, seeking intervention or protection from their local government, and taking advantage of the country’s loose stock suspension rules to halt trading for long periods of time that sometimes stretch into years, enabling them to avoid delisting.

Even so, the pace is starting to pick up as the government has amended delisting rules and boosted enforcement as part of efforts to clean up the stock market. This year there have been three expulsions and four more are going through the process. That compares with only seven delistings from 2013 to 2017.

The latest round of delisting reform began this March, when the Shanghai and Shenzhen stock exchanges each issued their draft Implementation Rules Governing the Mandatory Delisting of Listed Companies for Major Law Violations. The final version (link in Chinese) was only published in mid-November, a full eight months later, underscoring regulators’ prudent approach to tightening the rules and the sensitivity of the issue.

The rules clarify and expand on the circumstances under which a stock can be involuntarily delisted, empower regulators to expel firms that endanger public safety, and halve the length of time a company’s shares can be suspended for following a serious law violation before being removed from the market. They also ban companies delisted for fraud relating to share issuance from ever returning to the market and lengthen the waiting time for the submission of applications for relisting by companies delisted for other reasons.

“The Shanghai Stock Exchange will take the responsibility of strictly implementing the new rules. We will make sure that every company whose legal violations warrant delisting is delisted,” the bourse said in a statement (link in Chinese).

Despite regulators’ vows to “faithfully” enforce the toughened delisting rules, doubts about their ability to succeed persist given their poor track record and the innovative ways companies have found to evade getting booted out of the stock market.

The delisting regulations published in 2001 stipulated that a company with a consecutive three-year record of losses would have its shares suspended for varying lengths of time depending on their individual situation, and would be delisted if it failed to make a profit in the fourth year.

But firms quickly learned how to exploit loopholes in the rules. The phenomenon of reporting two years of losses followed by one year of marginal profits started to appear and became so popular that not a single company was delisted for that reason — or indeed for any reason — in the five years from 2008, even though the number of money-losing businesses accounted for 15% of all listed firms during that period.

Companies are desperate to stay on the stock market. That’s because no matter how worthless their assets or operations are, they have a good chance of being bought at a good price by unlisted firms looking to go public on the cheap, avoiding the rigid and lengthy review and approval process required by the government — a process known as a backdoor listing.

These so-called shell companies are also targets for speculators who buy the shares in the hope they will soar once a restructuring plan is announced, a practice that often drives up prices before any takeover is attempted.

In one extreme case, trading in Shenzhen-listed car air-conditioning maker Hengli Industrial Development Group was halted for nearly seven years from 2006 after it lost money for three straight years. When trading finally resumed in 2013 after a new controlling shareholder and some existing shareholders injected cash into the company, the share price soared nearly four times on the first day.

Hengli made losses again in 2014 and 2015 and only swung back into profit in 2016 by selling 80% of a wholly owned subsidiary. It fell back into the red last year and its main business is still losing money this year.

But due to previous restructurings, the company has become valuable because of its “shell” status. It has been a target of speculation recently as a result of renewed interest in such stocks after regulators softened controls on backdoor listings in October. Hengli’s shares more than quadrupled in the four weeks to Nov. 16, and jumped by the daily limit of 10% on 14 out of 17 trading days over that period.

The surge prompted the Shenzhen Stock Exchange to issue a statement warning investors that Hengli’s shares had risen far beyond a level that could be justified by the company’s business performance. The stock “has clearly become a subject of speculation” as retail investors accounted for more than 97% of the buyers and 90% of the sellers during the period, it said.

The bourse also singled out scandal-hit Changsheng Bio-Technology. The company was found in July to have supplied hundreds of thousands of substandard vaccines for infants and fabricated production data on its rabies vaccines. Changsheng has since halted production at its facilities and its chairwoman and senior managers have been detained by police. The government in October fined the company more than 9.1 billion yuan ($1.32 billion) and revoked its production license. Its stock has been under “Special Treatment” (ST) status, a label given to firms in financial distress or facing regulatory problems, since July 26.

Despite all the bad news, the company’s share price rose by the 5% daily limit for ST firms for seven straight trading days from Nov. 8 due to what the Shenzhen bourse described as speculation. Trading was suspended from Nov. 19, when the stock exchange announced that it had begun the process to delist the company because it had “committed major violations of the law.”

Only two companies have been delisted so far for law violations since the CSRC tightened regulations (link in Chinese) in 2014. But Changsheng is one of four listed companies now in the process of being expelled.

Some industry insiders complain that attempts by local government officials to protect listed companies in their jurisdictions have often crippled the enforcement of the delisting rules. These firms are usually big taxpayers and important for showcasing government achievements.

“One of the reasons delisting has been difficult is that local governments are keen to protect their listed companies — every time there’s a threat, we see intervention from officials, with the involvement of the provincial governor,” a senior executive with an investment bank who declined to be named told Caixin.

The new delisting rules are likely to be accompanied by far stricter enforcement as the definition of circumstances warranting delisting is more specific and practical than in previous regulations, others say.

“The new rules set the parameters for different types of major law violations … which should make enforcement easier,” said Dong Dengxin, director of the Finance and Securities Institute at Wuhan University of Science and Technology.

“The shortening of the pre-delisting suspension period (to six months from one year) has significantly restricted companies’ room for maneuver,” Dong said. “It will curb opportunities for speculation (on shell companies) and more importantly, it will shorten the delisting process and improve the efficiency of the delisting mechanism.”