In Depth: In a Land of Lactose Intolerance, Dairy is Going Down Better Than Ever 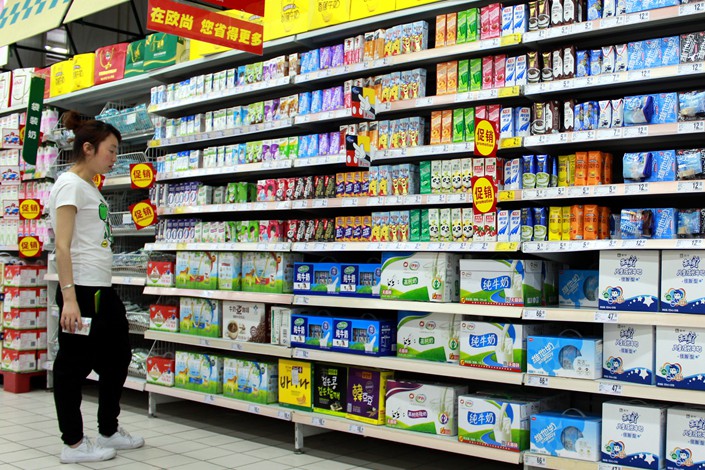 Supermarket customers examine milk in the dairy-products section of a supermarket in Nanjing, Jiangsu province, on June 4. Photo: VCG

Professor Thomas DuBois finds it tough to do field work in China.

But he isn’t studying military secrets nor the comings and goings in Zhongnanhai, the residence of China’s top leaders. The historian of contemporary China researches the dairy industry, which can be almost as sensitive due to a recent history of food safety scandals.

Late one night the day before a scheduled farm visit, DuBois received a call. “I was told it wasn’t convenient for me to visit,” he said. He protested, but the dairy rep held firm: “He said, ‘No, it isn’t convenient.’ ”

“They assume I’m a journalist, even though it says ‘Fudan University’ next to my name,” he told Caixin from his base at one of Shanghai’s leading universities. “It’s a really sensitive area because of the embarrassment of 2008.”

That was the year the Chinese dairy industry made global headlines for appalling reasons. Six babies died, 54,000 were hospitalized and some 300,000 fell ill after the toxic, nitrogen-rich chemical melamine — a white powder used in plastic-making — was added to watered-down milk to falsely boost its protein levels in quality tests. The scandal shattered global trust in Chinese-made food, and domestic trust in dairy products.

That distrust persists a decade later, as the success of foreign milk brands in the nation attests. But in the past decade, China’s dairy sector, which was already growing, has burgeoned. It’s now the world’s third-largest, behind the U.S. and India. In 1999, the average Chinese city-dweller consumed 9.07 kilograms (20.0 pounds) of dairy products per year. Per capita consumption is now three times that.

Meanwhile, dairy is now the second-most imported food category after meat, valued at $9.3 billion last year, up a hefty 36.1% from the year before. Consumer demand is projected to overtake that of the U.S. by 2022, according to Euromonitor International.

And all this in a nation where researchers say 4 in 5 people can’t drink a cup of milk without feeling sick. China’s hunger for dairy seems to flout scientific studies, which point to the pervasive intolerance of Chinese guts for lactose — the sugar that makes milk sweet.

So why is China’s dairy industry bursting like an unmilked udder?

Though mentions of milk can be found in Chinese texts dating back to the fifth century, the “knowledge of dairy skills was clearly local,” wrote DuBois in his soon-to-be-published history of Chinese dairy, whose manuscript he shared with Caixin. The Chinese first encountered Western methods of dairy preparation through contact with Central Asia, but consuming milk remained most common in northern border regions near Russia and Mongolia.

Globalization over the last two centuries introduced dairy on a wider scale. The 19th century brought European and American missionaries as well as refugees from European Russia, bringing with them a penchant for milk-based foods. The Russian refugees, fleeing both the Russian Revolution and World War I, brought entire herds of cattle with them, which were far better-suited to milk production than China’s native breeds, DuBois wrote.

In fact, China’s modern dairy industry owes much to its northern neighbor. In the heyday of Chinese-Soviet cooperation in the 1950s, China followed the Soviet Union’s model of large-scale milk production — and supporting propaganda.

During this time, the People’s Daily, the official newspaper of the Chinese Communist Party, promoted milk as healthy not only for individuals but for the strength of the nation. DuBois searched the newspaper’s archives for mentions of milk, and found a staggering 5,000. “Milk is so obviously symbolic,” DuBois told Caixin, adding that its availability to the Chinese population was often viewed as a sign of a prosperous economy.

“Set against reports of dairy production in the socialist world, milk took on an emblematic value as a barometer of progress, and of the socialist good life,” he wrote. Media outlets praised schools that kept their own cows to provide milk to students. Reports also emphasized innovation in the dairy sector across the communist world, using the increasing availability of milk to consumers in Poland, Hungary and the Soviet Union as examples of those countries’ success.

Much later, in 2006, when then-Premier Wen Jiabao dreamed of a China where every person, especially children, could drink a pint of milk a day, he may have been referring back to this. But high-profile interventions aside, since the 1990s, milk marketing has been taken over by China’s large dairy corporations, which grew after economic reforms dating back to the 1980s encouraged the development of a homegrown industry. Today, China is home to some of the world’s largest dairies, most notably Yili Group and China Mengniu Dairy Corp. Ltd.

But Chinese milk producers have been struggling with stiff competition from foreign imports, with raw milk prices dropping in June to their lowest since December 2012. Raw milk produced in China was selling for 3.38 yuan (49 U.S. cents) per kilogram on average at the end of June, even though the average production cost was higher at 3.4 yuan.

The inability to digest lactose is far more widespread in China than the West, but it’s a tricky thing to measure. You can give someone lactose and have them breathe into a machine that measures hydrogen, which is released when undigested milk sugar ferments inside the colon. Or you can check whether their blood sugar spikes after they eat it. For someone who gets stomach cramps and diarrhea after eating lactose, neither is ideal. There are also genetic tests, or an invasive biopsy of the small intestine.

But one thing is clear: Across the world, most people are lactose-intolerant.

Last year, researchers analyzed 175 studies with participants from 89 countries and estimated lactose malabsorption was widespread in most of the world, widely variable by region, and present in roughly two-thirds of the world’s population.

China had about an 85% prevalence of lactose intolerance among people older than 10, the report estimated. Sub-Saharan Africa and Asia had the highest levels.

People with the condition can still “cope” with small amounts of milk sugar, said Australian nutritionist Rosemary Stanton. “The usual figure quoted is 12 grams of lactose per day,” she told Caixin. “One cup of milk has 15 to 16 grams of lactose.”

But by that measure, coffee chains in China are dishing out milk in diarrhea-inducing quantities. The smallest size of a latte sold by Starbucks in China is a “medium,” which contains 12 fluid ounces of milk, an employee at a Starbucks branch in downtown Beijing told Caixin. That’s about 22 grams of lactose by Stanton’s measure — nearly twice what the gut of a lactose-intolerant person can take in a day.

Getting nutrition from animal milk was likely an evolutionary advantage for some populations. “Dairy products are highly nutritious — excellent sources of calcium and good sources of several B vitamins, other minerals and protein,” Stanton said. “However, each of these nutrients can be found in other foods.”

In many Asian countries, the main source of calcium has been small fish and shrimp consumed whole or made into particular types of fish sauces, Stanton added. “With such an excellent source, it’s hard to say dairy products are an essential addition.”

The rest of the health claims and counterclaims about dairy foods are difficult to disentangle from other variables affecting people who most consume dairy, Stanton said. Nations that consume high quantities often have high chronic disease burdens, sedentary lifestyles and a prevalence of junk food and drinks. Meanwhile research that promotes dairy as a “wonder food” is often tainted by conflicts of interest and direct or indirect industry funding.

Yogurt and cheese are relatively safe for the lactose-intolerant, Stanton said. The bacteria that thicken yogurt partially digest the lactose, which also decreases in quantity as the yogurt “ages.” Even a pot that has been in the refrigerator for a few days will have less lactose than fresh yogurt.

Cheeses, meanwhile, have “virtually no lactose and so are not a problem” for the lactose-intolerant. But some people, though far fewer, do have an allergy to the protein in cow’s milk, and they will react to milk, cheese and yogurt.

Ultimately, China’s growing appetite for dairy impacts more than China. Cattle rearing has adverse effects on the environment, due to both the feed needed to sustain cows and the result of all that feeding, including their gas, which emits harmful levels of methane into the atmosphere.

This feeds a damaging cycle. Climate-change-associated drought damages pastureland and causes heat stress to the cows themselves. Research from advocacy group Grain published in July 2018 found that China was the world’s top emitter of greenhouse gas emissions from meat and dairy production. “If there is to be any chance of limiting the rise in global temperatures to 1.5 C, significant cuts in emissions from meat and dairy production in these countries must be prioritized,” the researchers wrote. They also found the world’s top five meat and dairy corporations contribute more to annual greenhouse gas emissions than energy giants Exxon Mobil Corp., Shell Oil Co. or BP PLC.

The environmental cost will multiply if Chinese brands succeed in their global ambitions. Yili, China’s largest dairy, is in the midst of a massive international expansion, and the company aims to reach 2 billion customers both at home and abroad by 2020, CEO Zhang Jianqiu told Caixin earlier this year.

Whether Chinese expansions succeed in convincing Southeast Asian populations to consume more milk remains to be seen. But even outside China, dairy is impacted by Chinese politics. Mengniu has said that its moves in the region have profited from increasing trade initiatives flowing from the Belt and Road Initiative, China’s program to export its manufacturing and infrastructure-building skills to other developing markets.

Dairy, after all, is at the center of political, economic and cultural factors. “Commodities still intertwine with culture,” DuBois said. “And this particular experience with dairy is in many ways a characteristically Asian, and more specifically, a deeply Chinese phenomenon.”