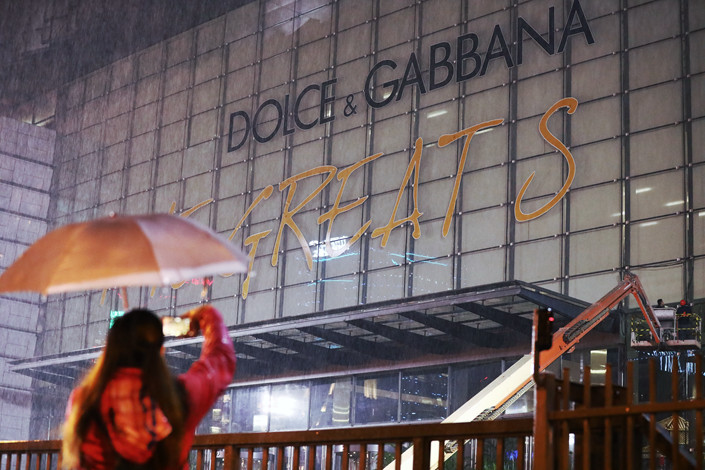 A worker takes down the sign a Dolce & Gabbana fashion show in Shanghai on Nov. 21. Photo: IC

Trusted brands, corporate stock values and the reputations of chief executives were weighed down by serious challenges in 2018 that eventually landed squarely on the shoulders of Chinese public relations professionals and senior management.

Here's a summary of six public relations trends and lessons from the past year that stand out as important references for future strategizing to guide your business decisions in 2019.

In November, similar furor followed the release of advertisements with a chopsticks theme created for the Italian luxury fashion brand Dolce & Gabbana. Many considered the ads insulting, leading to celebrity chastisements and the brand's goods vanishing from e-commerce platforms. The Italian company even canceled a fashion event.

What we learned: These and similar incidents reflect increasingly strong patriotic feelings in China. This wave of nationalism reflects China's strengthening as a world power. Some called Dolce & Gabbana's insulting video advertisement a case of marketing suicide. China’s official People's Daily newspaper responded by quipping the Chinese nation "is our most cherished luxury." Marriott's blunder prompted the Ministry of Foreign Affairs to announce "foreign companies in China should respect China's sovereignty and territorial integrity." Such reactions highlight that foreign companies in China must be politically aware and respectful of Chinese culture. At the end of the day, it's best to adhere to mainstream values.

Trend 2: The close ties between Chinese politics and the fates of Chinese corporations were affected by international politics.

A U.S. ban on ZTE chips and the detention of Huawei's Chief Financial Officer Meng Wanzhou underscore a new type of public relations challenge tied to geopolitics. Diplomatic games are at play but Chinese companies must choose their words carefully, as their responses can say a lot about China's leadership in the international business community.

What we learned: For Chinese companies active in the global business arena, public relations are mainly about resolving communication problems with the West. They emphasize cooperation and "win-win" strategies within an open-minded ideological framework. In communicating with the West, public relations should be less about staking positions and more about mutual benefits.

Two killings at the hands of ride-hailing company Didi drivers, the case of fake vaccines sold by Changchun Changsheng, and a fatal Country Garden construction site tragedy were among the incidents that sparked public anger in 2018. Each company paid a hefty price for a lack of public security. The Didi incident led to government inspections. Country Garden was the target of furious media critiques. Changchun Changcheng had to delist its stock.

What we learned: Analyses of these incidents as well as the prioritization of public security by respective companies can be traced back to how each approaches corporate citizenship. Such cases also lay bare a company's value system.

Every enterprise must closely consider functioning as a responsible corporate citizen to meet society's expectations. Every public security crisis reveals the strategic importance of corporate social responsibility: Companies must put society before profits. Corporate responsibility must be key to every business strategy.

Trend 4: Superstar corporate executives not only attract attention but can also generate an avalanche of negative publicity

Private education service provider New Oriental Chairman Yu Minhong was caught discriminating against women while online retail giant JD.com’s Chairman Liu Qiangdong's was accused of rape in the United States. An online movement pressured Yu to apologize for his inappropriate comments. The negative effects have spread to the otherwise underperforming New Oriental, and the market capitalization of JD.com has took a roller-coaster ride with the exposure and development of its founder’s sexual assault case.

What we learned: Yu and Liu are company founders. They are spiritual leaders and represent the company's brand. Their misdemeanors, scandals and even private issues are difficult to completely separate from the company. It is important to note that Liu Qiangdong’s scandal was particularly harmful to JD.com because he is the largest holder of its shares, with 79.5% of voting rights.

Several 2018 incidents revealed pitfalls. For example, Hongmao Pharmaceutical Co. Ltd. was charged with misleading advertising after trumpeting a liqour’s "medicinal" qualities. And the world was shocked when a Chinese scientist He Jiankui announced a genetically engineered baby. The Hongmao incident became a textbook case for misleading publicity in the health care industry, while the He Jiankui incident has had a negative impact on the global reputation of China's biomedical community.

What we learned: Marketing and publicity in the life science and health care sectors must adhere to medical ethics, follow regulations, and show respect for life. Marketing hype has no place. Under the new advertising law of 2015, publicity of "curative effect" for health care products and medical treatment must be treated with caution. Marketing methods that employ exaggeration reap negative consequences.

Trend 6: A rise in individualism and a sense of civic duty prompted social media activism in China

China is embracing civil society, leading to what I consider the most important trend in the public relations arena. Thanks to social media prevailing in China, everyone is a journalist, everyone a watchdog. The Marriott Hotel incident, for example, started with netizens posting the company's misdeeds on social media, sparking global attention.

What we learned: Chinese millennials grew up with the internet, and many are fluent in English. Also, they are inquisitive and have a strong desire to acquire information and make an impact on society. It would be unwise to ignore or underestimate the intelligence and information-gathering abilities of this generation.

Times are changing. Chinese citizens are actively engaging themselves in civil society more than ever. In the wake of an emerging civil society, it is de facto a golden era for strategic public relations in China.