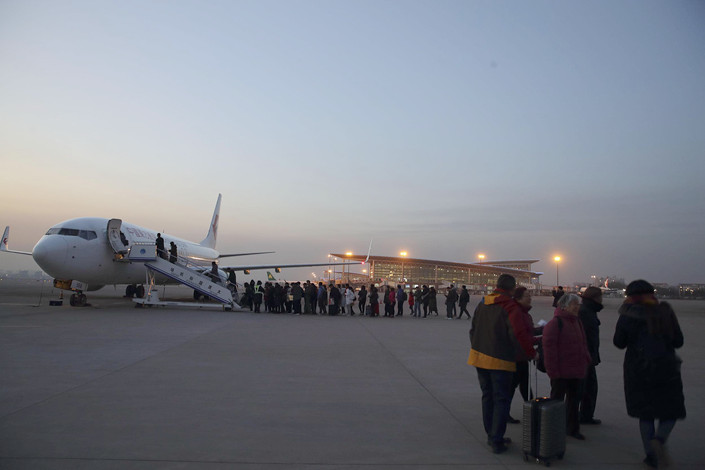 China is aiming to boost its air passenger traffic by 11% this year and pour more than $10 billion into related infrastructure, as it continues on track to become the world’s largest aviation market, according to the regulator’s latest annual work report.

The strong expansion and massive spending campaign comes as Beijing shifts its infrastructure spending into high gear in a bid to support the slowing economy. It also comes as the Chinese capital gets set to open a second, massive new airport later this year that will immediately be one of the world’s largest.

Chinese airports logged some 610 million passenger trips last year, up 10.9% over 2017, and are aiming to boost the total by a similar growth rate this year to 680 million trips, according to a summary of the industry’s annual work report (link in Chinese) posted Monday on the website of the Civil Aviation Administration of China.

Air cargo volume grew by a slower 4.6% to about 7.4 million tons, with a target of about 7.9 million tons set for this year, the report said. The overall aviation industry posted 17% revenue growth to 875 billion yuan ($127 billion) for the year.

The just-concluded year also saw a marked improvement in on-time performance for China’s airlines, with the industry posting an overall punctuality rate of about 80%. That was up sharply from just 71.7% in 2017, when the industry came under wide criticism for late flights.

“China’s economy has shifted from a stage of high-speed to high-quality growth,” the regulator said in the summary of its work report. “Promoting and achieving high-quality development in civil aviation is an urgent requirement and an arduous task before us.”

China’s rapid economic growth has fueled a concurrent boom in its air transport business, buoyed by a new generation of people traveling both for work and for leisure. The country passed the U.S. to become the world’s largest market for business travel in 2016, as a new generation of road warriors took to the skies and also traveled over the country’s state-of-the-art high-speed rail network.

The boom has made China one of the largest markets for global aircraft giants Boeing Co. and Airbus SE, which have both set up local manufacturing facilities. Airbus set up its production facility in the northern city of Tianjin in 2008, while Boeing’s facility, which does final assembly work for its popular 737 aircraft, opened in November in East China’s Zhejiang province.

China has been building up its network of airports to accommodate the rapid expansion, and now has 229 that can receive regular commercial flights, according to the report. Among those, 37 airports now handle 10 million passenger trips or more per year, led by Beijing Capital International Airport, which was the world’s second-busiest airport last year with more than 100 million trips.

China will continue to build up capacity in the year ahead, with plans to spend 85 billion yuan on air infrastructure in 2019, according to the report. That spending comes as China has recently revved up infrastructure spending in other areas as well, such as long-distance and urban rail, in a bid to spur growth in the face of a slowing economy.

Within the aviation sector, the biggest spending by far on a single project over the last few years has been on Beijing’s new Daxing International Airport, which has a total price tag of $12 billion. When it opens later this year, the massive new complex will have seven runways, and is expected to be able to handle 72 million passengers annually by 2025.