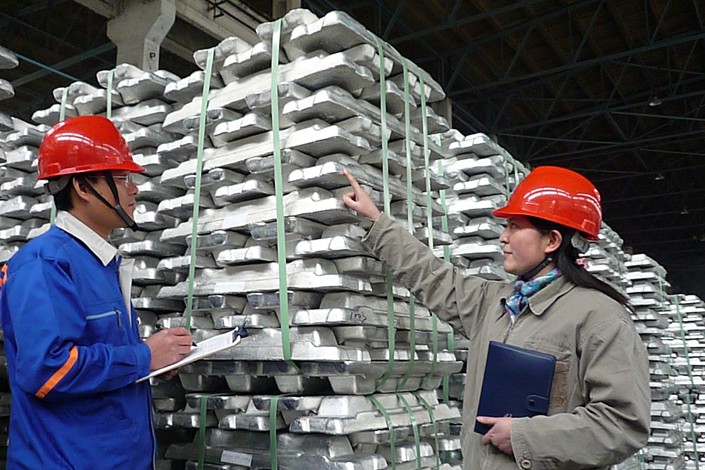 Technicians carry out quality tests on aluminum ingots for export at the Guangxi branch of the Aluminum Corporation of China on Feb. 1, 2018. Photo: VCG

Although many Chinese aluminum producers were hammered by low market prices and forced capacity cuts last year, Chinalco Group Co. Ltd., the biggest of the lot, announced it doubled its profit to 4.1 billion yuan ($605 million).

Prices of aluminum, a lightweight metal used in products as diverse as tin cans and high-speed trains, hover around a two-year low of $1,850 a ton on the London Metal Exchange, a major trading platform, partly due to slowing growth in demand and rising tariff barriers. China’s producers complained of being particularly squeezed by tougher environmental regulations and rising pressure to curb excess capacity.

Yet at a work conference over the weekend, Chinalco announced it had doubled its year-on-year profit in 2018. While the company did not actually post a figure, that would amount to a profit of 4.1 billion yuan. It did announce an operating income of 300 billion yuan for the year. But it did not disclose how much of its net profit went to the State-owned Assets Supervision and Administration Commission, which oversees the country's top 90 state-owned enterprises.

The figure would be a new record and signal a remarkable turnaround for the company, which had a net loss of 5.35 billion yuan in 2015. Company insiders credit the transformation to its chairman and party secretary, Ge Hongling, who has spearheaded efforts to shut down outdated smelters, improved the quality of products, and shifted production to bases in resource-rich areas such as Yunnan province and the autonomous regions of Guangxi Zhuang and Inner Mongolia. Central government reforms that encouraged the company to develop its own electricity supply have also helped to cut costs.

Yet the rosy total profit figure the company announced does not signal the Chinese industry has turned a corner, given a report published by the China Chengxin Credit Rating Group this month. It said that Chinalco’s main aluminum business performed poorly in the first three quarters of last year, ratcheting up losses of 1.25 billion yuan. The losses were offset by investment income of 3.64 billion yuan and 1.26 billion yuan in nonoperating income, which mainly comes from government subsidies and capital gains from selling old assets, China Chengxin analysts said.

But the report also said that the company had made good investments in expanding its upstream mining operations overseas, especially as competition to develop assets abroad becomes fiercer. Last summer, the company started work on a $1.3 billion expansion of capacity at the Toromocho copper mine in Chile, and in May its listed subsidiary increased its investment in Guinea’s Boffa bauxite project to $706 million.

Yet analysts say the aluminum industry is likely to continue to experience difficulties, largely thanks to slowing demand in China, which is thought to consume around half the world’s global aluminum supply. Growth in the world’s second-largest economy has lost steam in recent months amid a trade war with the U.S., despite Beijing’s efforts to cut taxes and fees, and to increase investment to bolster the economy.