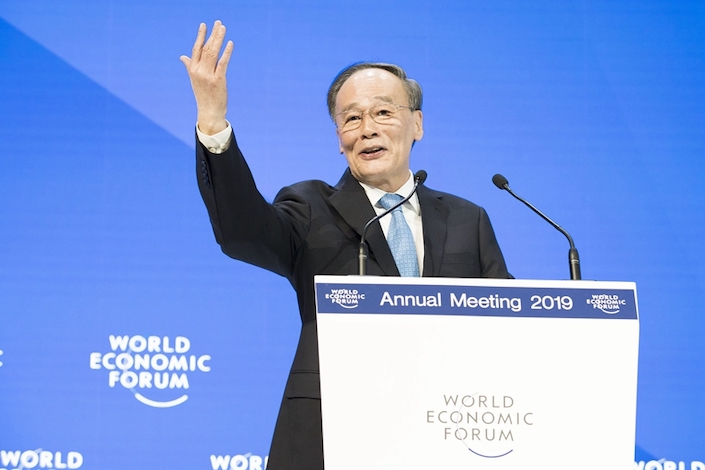 (Davos, Switzerland) — Is the world on the verge of sliding into another damaging financial crisis? As downbeat evidence piled up going into the annual World Economic Forum last week – much of it focused on China – Chinese Vice President Wang Qishan struck a defiantly optimistic posture.

“No matter the uncertainties we face in 2019, there is one certainty – China’s development will be sustainable,” the 70-year-old Wang told the forum in the Swiss resort town of Davos. "If another crisis does occur … I believe it will ultimately test the wisdom and diligence of the human race. Just like getting a cold or a fever … catching a fever is exactly the right way to test the immune system."

Wang’s comments before the annual gathering of world political and business leaders forcefully conveyed the confidence and determination of China’s leadership in continuing to build a prosperous society, even as the world’s second-largest economy faces serious headwinds this year. As a close ally of President Xi Jinping, Wang is known as the man most effective in explaining China to the rest of the world.

Wang led an unusually large Chinese delegation to Davos that included 25 government officials at or above vice-ministerial level. It was a clear demonstration of China’s expanding role on the world stage. Wang and other members of the China delegation seized the moment to send positive signals amid otherwise gloomy signs for the global economy.

There was plenty of distress on display at this winter’s gathering following a year of twists and turns. The year 2018 ended with wild stock market gyrations; an unsettled and potentially catastrophic trade war between the world’s two largest economies, China and the United States; mounting tensions in Europe surrounding Brexit and a foreboding outlook for the year ahead.

One day before the forum opened in Davos, the International Monetary Fund (IMF) lowered its 2019 projection for global growth in its World Economic Outlook report. The fund projected that global economic growth would slow to 3.5% in 2019 down from an October forecast of 3.7%, which was lowered from a 3.9% prediction earlier last year. IMF Managing Director Christine Lagarde warned that the world economy is growing more slowly than expected amid increasing risks after two years of solid expansion.

The escalating trade war between the U.S. and China has dominated global headlines over the past year and still poses a great threat to global outlook.

Officials of China and the U.S. are racing to resolve the dispute before a March 1 deadline set in December by their top leaders. If a deal can’t be reached by then, the Trump administration has said it would increase tariffs on $200 billion worth of Chinese imports from 10% to 25%. The two countries have imposed punitive tariffs on about half of each other’s imports since the summer of 2018.

The tariff fight has started to squeeze China’s economy as growth slowed to 6.6% in 2018 from 6.8% in 2017, marking the weakest annual expansion since 1990, official data showed.

Flagging growth momentum and rising trade barriers globally have shaken market confidence. Stock markets worldwide, including U.S. indexes, have posted disappointing yearly returns. The S&P 500 Index was down 6.2% for 2018, the worst performance since the global financial crisis a decade ago.

“We can bear the weather changes, but if it is the climate change, (we) will have to take a more proactive response,” said Hu Houkun, vice chairman of Huawei Technologies Co., referring to uncertainties in the global business environment. The Chinese telecom equipment giant is at the center of the Sino-U.S. trade tensions and faces stiffening challenges in foreign markets as it is accused by the U.S. and allies of posing a threat to national security, allegations that the company denied.

China’s slowing growth was among the hottest topics at this year’s Davos gathering. But in his remarks, Wang pushed back, pointing out that China’s growth rate last year was solid and emphasizing that Beijing has prioritized structural reform, quality, and efficiency over speed. China’s leadership has taken a raft of proactive measures to bolster the cooling economy.

“Despite all sorts of risks, challenges and difficulties, there is no question that we will achieve the target of building China into a moderately prosperous society in all respects by 2020,” Wang said. It has been a longstanding goal of the ruling party to raise living standards and ensure that most people live relatively comfortably.

Fang Xinghai, a vice chairman of the China Securities Regulatory Commission, also reassured international investors that China’s economy is resilient and that the government still has leeway to support the economy with fiscal and monetary policy.

Growth will moderate to around 6% in 2019 from 6.6% last year, but the slowdown is not a “collapse,” Fang said during a panel discussion on global financial risks in Davos.

“The Chinese macro policy is very responsive and also is data-dependent, so as things unfold, we will respond accordingly,” Fang said. “The capacity of the Chinese government to respond to the economic slowdown is still very high. If anything, we should not overreact.”

In its report, the IMF maintained its previous forecast for China’s growth at 6.2% for 2019 and 2020, crediting measures taken by the Chinese government — including tax cuts and reductions in the amount of money banks must keep in reserve — for cushioning the negative effects of the trade dispute with the U.S.

Chinese authorities have shifted to pro-growth policies since the second half of last year with expanding fiscal spending and measures to bolster liquidity. The central bank earlier this month cut banks’ reserve requirement ratio by 100 basis points, or 1 percentage point, pumping around 800 billion yuan ($117.1 billion) into the financial system. That followed four cuts in reserve requirements last year.

The government has also stepped up efforts to reduce taxes for businesses and households. A source close to the Ministry of Finance said the government is expected to cut a total of 1.5 trillion yuan from taxes and fees in 2019, compared with about 1.3 trillion of reductions this year. Earlier this month, the cabinet unveiled measures to cut taxes for small enterprises by about 200 billion yuan each year.

In the face of challenges, China’s choice is to do its own things well in a resolute manner, the vice president said at Davos, adding that the development of China will benefit the whole world.

Imminent tasks facing China include further reducing the economy’s leverage and promoting financial-market reforms, said Ray Dalio, the billionaire founder and co-chairman of the American hedge fund Bridgewater Associates. China’s two-year-old deleveraging campaign may have caused some pain but will benefit the economy in the long run, Dalio said.

But Mark Machin, president and chief executive of the $368.3 billion Canada Pension Plan Investment Board, warned at a roundtable sponsored by Caixin that Chinese regulators need to carefully control the pace and strength of deleveraging policies to ensure short-term stability while maintaining long-term goals.

Swiss investment bank UBS Group AG Chairman Axel Weber said that instead of short-term policies to stabilize market demand, China should focus more on long-term reforms on the supply side. That involves the further opening of the country’s capital market, not only by expanding foreign investors’ access but also by allowing more domestic capital to invest overseas.

Wang’s remarks at Davos were closely watched for clues about China’s stance in the trade talks with the U.S. Hopes had been high that he would meet with U.S. President Donald Trump during the forum, before Vice Premier Liu He heads to Washington for the next round of talks at the end of this month. But the American delegation canceled its trip to Davos because of the partial U.S. government shutdown.

The Chinese and U.S. economies “are in state of (being) mutually indispensable,” Wang told the forum. “Either side can’t do without the other side.… There has to be a mutual benefit and a win-win (relationship).”

In a video address to the forum, U.S. Secretary of State Michael Pompeo voiced optimism for a good outcome in the trade talks and said conflict between the two nations could be avoided.

The tensions between China and the U.S. have caused anxiety among global entrepreneurs and investors, complicating business strategies and financial arrangements, said Glenn Youngkin, co-CEO of the Carlyle Group private equity fund.

Uncertainties about the conflict will affect business judgments of the future, said Piyush Gupta, chief executive of Singaporean bank DBS.

A recent survey by PricewaterhouseCoopers found a jump in pessimism among global business leaders. Almost 30% of those surveyed said they believed global economic growth would decline in the next 12 months, six times more than the 5% of respondents in last year’s survey, the accounting firm said last week.

Companies have started to adjust their global business strategies in the face of uncertainties. Lu Min, chief executive officer of China Mengniu Dairy, one of the country’s largest dairy companies, said his company has shifted to Argentina and other countries as alternatives to the U.S. for soybean purchases, as American soybeans were hard hit by Chinese tariffs. Lu said it is time for big Chinese companies to structure their supply chains globally.

Zhao Linghuan, president of the Chinese investment firm Hony Capital, said the trade friction will force Chinese companies to accelerate ongoing efforts to move part of their business chains abroad where costs are lower. But Zhao warned that companies should be prudent in the process to avoid making mistakes by rushing decisions.

Huawei has been largely shut of the U.S. market and has been barred by several western countries from taking part in development of next-generation 5G telecom networks on the grounds of national security.

Wang emphasized the protection of national security and respect for countries’ tech options, but he also cautioned against technological hegemony.

“It is imperative to respect national sovereignty and refrain from seeking technological hegemony,” Wang said. A balanced attitude toward technology is needed to accommodate the interests of all countries, he said.

“One should not ask the whole world to address only the security concern and comply only with the standards of developed countries or individual countries,” he said, without elaboration.

Rows over technology and intellectual property rights are deep sources of the China-U.S. dispute, reflecting conflict between a superpower and a rising power, said Yan Xuetong, dean of the Institute of Modern International Relations at Tsinghua University.

The impact of China-U.S. negotiations goes beyond the two countries, and it is possible to set the tone for new global order, Yan said.

Wang said China will defend multilateralism and globalism in the face of increasing unilateralism and protectionism. He urged governments to deal with domestic resentments by pursuing structural reforms, maintaining growth and achieving more equality in income distribution.

“The fundamental solution is that in making the cake bigger, we need to weigh fairness and efficiency, so governments of all countries must take all measures to … stop inequality from widening,” Wang said.