How to Cure China’s Liquidity Headache 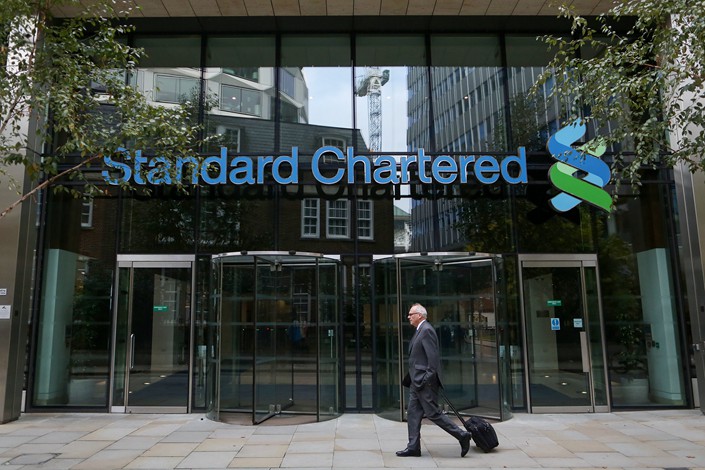 The London headquarters of Standard Chartered in November 2015. Photo: VCG

A key challenge for China’s policymakers this year will be finding ways to release liquidity into the real economy to support growth, but measures shouldn’t involve direct purchases of stocks and bonds by the central bank, a form of quantitative easing (QE) that’s been hotly debated recently.

That’s according to Eric Robertsen, the head of global macro strategy and foreign-exchange research at London-based Standard Chartered Bank, who spoke in an interview with Caixin in Shanghai on Friday.

“The liquidity in China’s economy is actually trapped in the financial markets, it’s trapped among the top-tier financial institutions, top-tier insurance companies and in many ways, it’s trapped among state-owned enterprises (SOEs),” Robertsen said. “So capital being provided by the central bank is not being dispersed to the real economy.

“We believe that would be the critical challenge for policymakers this year and next year, to figure out ways to unleash or release that liquidity to the broader economy.”

There have been calls for the People’s Bank of China (PBOC), the central bank, to undertake QE, as many of the world’s major central banks did during the global financial crisis to support liquidity and lending. It involves directly buying bonds or equities to increase the supply of money into the financial system.

“I’m not convinced that it would be healthy for the economy for the central bank to just go into the market and buy government bonds,” Robertsen said. Given that yields on 10-year Chinese government bonds have dropped by 80 basis points over the past year, bonds don’t need support, he said.

Buying equities could also be problematic. “In most market-driven economies, there’s always fear when the central bank is an active participant of the equity market,” Robertsen said. “In China that fear would be extremely relevant, especially at a time when China wants its equity market to be included in the broader global equity index.”

The PBOC has, nevertheless, been working to increase liquidity in the financial system and encourage bank lending. In January it cut the amount of money that banks have to set aside as reserves at the central bank, adding to the four cuts it made in 2018. It has also relaxed criteria for lending to small and micro business, and recently gave the green light to banks to shore up their balance sheets by issuing perpetual bonds, a type of debt that has no fixed maturity.

In an effort to make the bonds attractive to investors and improve their liquidity, the PBOC last week introduced a mechanism that will allow them to swap the bonds for central bank bills which can be used as collateral to borrow from the PBOC through its various lending facilities and open market operations.

“That has some interesting potential, because that may allow banks to issue more perpetual bonds, and may free more capital on banks’ balance sheets,” Robertsen said. “It is an example of a central bank intervening in the financial market, but it’s less obvious or aggressive than traditional QE.”

The PBOC will continue to add liquidity into the financial system this year through more cuts in banks’ reserve requirement ratio but will also need to find other ways to squeeze trapped cash into the broader economy, Robertsen said.

“There is quite a bit of risk aversion among the top-tier financial institutions,” he said. “You have a situation where those who hold the liquidity are reluctant to lend more to the part of the economy most dependent on it. We need to see some incentives offered for the banking community and financial institutions to free up some of that liquidity.”

More effort also needs to be made to lower the cost of funding for privately owned companies (POEs), he said, pointing out that SOEs hold a lot of cash which keeps liquidity trapped. “We need to see the incentive structure between SOEs and POEs adjusted to be more equal. I think that would help to release some of the liquidity to the broader economy.”

The yuan depreciated 5.7% against the U.S. dollar in 2018, ending the year at 6.88, partly on the back of the strength of the dollar. Robertsen forecast the Chinese currency will strengthen to 6.65 by the end of 2019, despite expectations of slowing economic growth, as more foreign capital invests in China’s financial markets.

Chinese stocks are being included in global equity indexes and government bonds are also set to join global government bond indexes, which will bring $100 billion of foreign capital into China’s financial assets this year, he said. The bond market alone will attract nearly $300 billion over the next three years as a result of the inclusion of Chinese bonds into some international benchmark indices.

“That should, in our opinion, be enough to keep the currency, at the very minimum, stable, and may allow it to strengthen against the dollar,” Robertsen said.