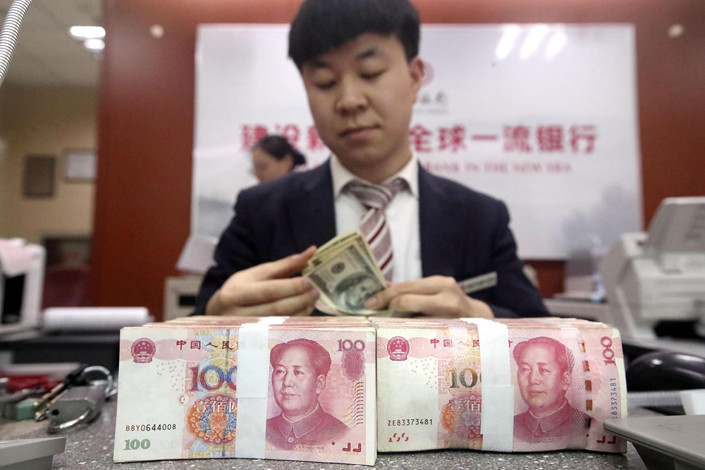 The yuan rose to its highest level against the dollar since July 16, after dovish comments from the U.S. Federal Reserve dampened expectations of further rate hikes.

The yuan briefly dipped below the 6.7-per-dollar line in morning trading on Thursday for the first time in six and a half months, after the People's Bank of China (PBOC) set the yuan's daily parity rate at 6.7025 per dollar, 318 pips below the previous day's rate. The PBOC allows the yuan to trade at 2% either side of this rate.

The yuan was boosted when the Fed signalled a possible end to its cycle of rate hikes after a January meeting that left rates unchanged. The U.S. central bank will be “patient” with regard to future adjustments, it said in a statement after the meeting, in light of “global economic and financial developments and muted inflation pressures.”

While the Fed hiked the cost of borrowing every quarter since December 2017, China kept its benchmark rates stable amid slowing growth and trade war pressure. This narrowing interest rate differential was a key source of pressure on the yuan, which reached a 10-year low last year against the dollar. The Fed has recently indicated more caution about further tightening, amid concerns about risks to the U.S. economy.

The pricing of interest rates futures indicates the market puts the chances of no hikes at all in 2019 at over 70%, said Zhang Lu, an analyst at CEBM Group, a subsidiary of Caixin Insight Group. This cycle of hikes is likely already in its last stages, she said.

“Our view is the Fed is on hold now, for the first half of the year,” Eric Robertsen, Standard Chartered's head of global macro strategy and foreign-exchange research, told Caixin last week, adding that the Fed may already be finished with its interest rate cycle. “Our forecast is 6.65 [yuan] vs. dollar by the end of the year,” he said, adding that more capital flows into China will also help support the currency and offset the effect of the country's slowing growth.

Trade war tensions are another key source of pressure on the yuan, which strengthened earlier in January after a mid-level meeting between the two sides. Delegates from China began conducting more negotiations in the U.S. on Wednesday to try to make a deal between the world's two largest economies. A 90-day delay to further tariff hikes, agreed in December last year, is due to end at the start of March if no agreement is reached.

“The other hurdle is of course the U.S.-China trade negotiation, which is much more challenging,” he warned.